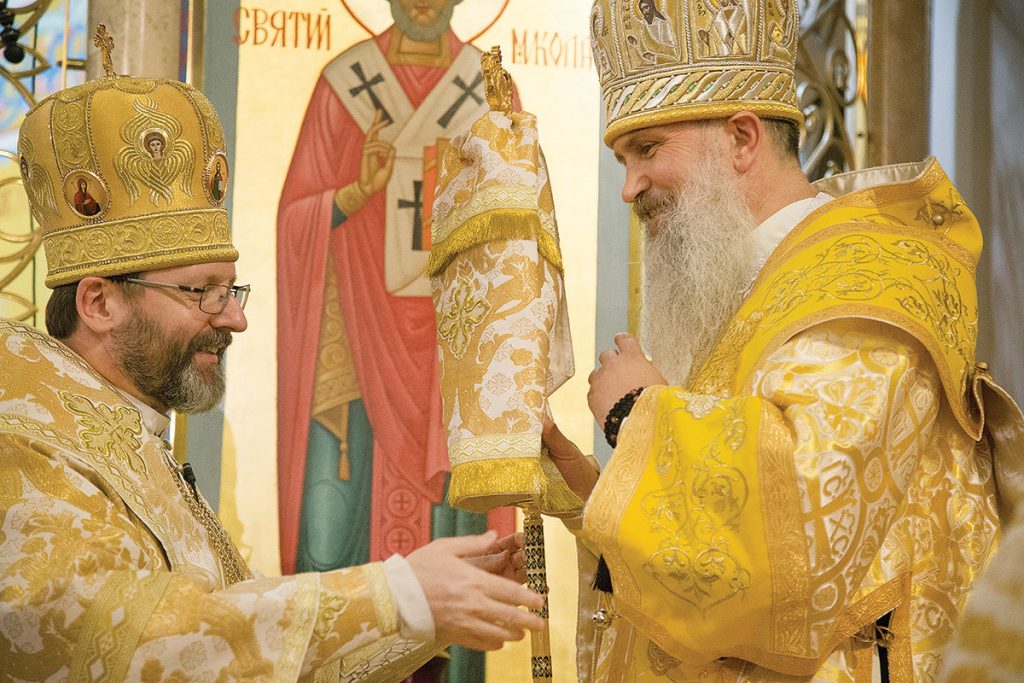 CHICAGO – Bishop Benedict Aleksiychuk was enthroned as the fifth eparch of St. Nicholas Ukrainian Catholic Eparchy in Chicago, which includes most of the central and western United States, including Hawaii and Alaska. The services took place on June 29 at St. Nicholas Cathedral, which was filled to overflowing by the faithful, hierarchs, clergy and monastics.

The Ukrainian-born Bishop Benedict (Venedykt), 49, previously served as auxiliary bishop of Lviv. He is a Ukrainian Studite monk; he was ordained a priest in Lviv 25 years ago and as a bishop in September 2010. His appointment as eparch of Chicago was announced in April by Pope Francis.

Vespers on the eve of the Feast of the Apostles Ss. Peter and Paul were celebrated by hierarchs, priests, deacons and monastics gathered from throughout North America and Europe, joined by throngs of faithful from near and far to fill the cathedral to near capacity.

The next morning, among those attending the enthronement services of the new eparch were hierarchs of other Churches sui juris of the Catholic Church. Clergy and laity alike were able to participate together with the complete text of the services provided in bilingual booklets available to facilitate the flow and cadence, whether singing in English or Ukrainian – along with a smattering of Greek to reflect the ancient origins of the Byzantine liturgical family to which the Ukrainian Church belongs.

Just before noon, a procession of the ranks of clergy was joined by altar servers and representatives of parishes and societies down Rice Street in Chicago’s Ukrainian Village to the bishop’s chancery where Patriarch Sviatoslav, primate of the Ukrainian Greek-Catholic Church, and Archbishop Christophe Pierre, apostolic nuncio to the United States, were waiting to escort Bishop Benedict across the street to his cathedral. With the pealing of bells, the entourage ascended the steps to the cathedral church.

The divine liturgy began and, as the Small Entrance concluded, a slight departure from the service began. Archbishop Pierre addressed Bishop Benedict and the assembled congregation to announce to one and all the news they had come to hear.

In an English-language translation of the Latin document sent from Pope Francis, dated April 20, 2017, all were informed of the appointment of Bishop Benedict to the see of Chicago, in accord with the selection made by the Permanent Synod of Bishops of the Ukrainian Greek-Catholic Church in September 2016 and forwarded to the pontiff for acceptance and promulgation.

Metropolitan-Archbishop Stefan Soroka of the Ukrainian Catholic Archeparchy of Philadelphia began the ceremony of enthronement, calling forth Patriarch Sviatoslav to impart the insignia of the episcopal office, and escort Bishop Benedict to the cathedra (chair) in place in the main church of the eparchy and declare him worthy of his new office, proclaiming “Axios.” After a resounding affirmation by the clergy and congregation, Bishop Benedict sat in his chair to receive the clergy of the eparchy over which he is the overseer.

Bishop Benedict then joined the concelebrating hierarchs to continue the liturgy, the conclusion of which was accompanied by the prayerful petition that God grant His servant, Bishop Benedict, “many years!”

Speaking during the dinner that followed the enthronement service, Patriarch Sviatoslav noted that “His Beatitude Lubomyr [Husar] knew about the appointment of Bishop Benedict, rejoiced and awaited this day.” He pointed out that Cardinal Husar, his predecessor as primate of the Ukrainian Greek-Catholic Church, was beloved by the people and that he was proclaimed “our national intercessor for peace in Ukraine.”

In turn, Bishop Benedict spoke about his calling: “Monastic life is a calling… God is calling. Why? For what? You don’t know. God is calling you. I am feeling even today that I had this calling and chose it. Serving as a monk, a priest, a bishop, I tried to value the people whom God was giving me.”

He added: “I don’t know why God has led me here, but I believe that He wants to do something good here. I am not a Savior, but I came here so we could do something good together. It is not going to be easy and simple. But when we are working, the Lord will help us.”

“Ukraine will be strong only when our diaspora is strong, and diaspora will be strong when Ukraine is strong,” he continued. “I am grateful to God that at this period of my life I am here. I am waiting for your support and collaboration. We mustn’t be afraid of problems. May God help us follow this road of trust to God.”

Welcoming the new bishop of Chicago, Metropolitan Stefan, leader of the Ukrainian Catholic Church in the United States, stated: “You are being installed as the new bishop for St. Nicholas Eparchy in Chicago. Most of the faithful of the eparchy are descendants of immigrants to these United States of America. The Ukrainian Catholic Church has enjoyed successive waves of immigrants coming from Ukraine and elsewhere, beginning in the late 1880s. They have come fleeing poverty, war and persecution in Ukraine. Each wave of immigrants have different priorities in life. They all share a thirst for God but reveal it in different ways. You and I and the Church needs to always be mindful of responding to the needs of newcomers, but also to devote equal attention to those born here and their succeeding generations.”

He offered these words of advice: “We are not as welcoming a people as we might think. We want newcomers to adapt to the existing ways. You will experience similar attitudes as a newcomer. My advice to you is to simply be yourself, and reveal your unique gifts and way of leadership without any compromise. That is why Jesus sent you here. God knows what this eparchy needs. You simply need to be yourself! Don’t let others, however well intentioned, try to unduly influence you in ways contrary to your gifts. You are blessed with a dedicated clergy, each having different gifts and talents to share.”

The metropolitan added, “My brother bishops Paul [Chomnycky], Bohdan [Danylo] and John [Bura] are excited about your becoming part of our team. We meet regularly to share our experiences, and address our needs together. We need one another. Bishop Benedict, know that you can rely on our fraternal care and love, and support.”

At the conclusion of the celebratory dinner, Archbishop Ihor Vozniak, metropolitan of Lviv, gave some advice to the faithful: “Respect the bishop and love him. Build together our Church here, care about it and live in peace among yourselves, help each other and grow in love.”