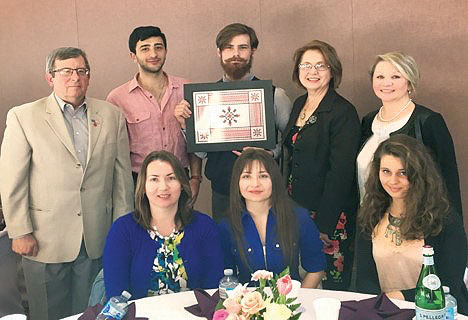 ROCHESTER, N.Y. – In 2013, a Ukrainian Partnership Program was established to promote collaborative educational projects between Nazareth College of Rochester, N.Y., and the National University of Ostroh Academy in Ostroh, Ukraine. This was achieved on the initiative of Tamara Denysenko and Dr. George Eisen, executive director of the Nazareth College Center for International Education (CIE).

In the spring of this year, Nazareth College welcomed Dmytro Baida, the first exchange student from Ostroh Academy. Mr. Baida not only pursued academic studies and collegiate activities, but became a welcome member of the Greater Rochester Ukrainian American community, thanks to Eugene Sydor and his family, who took him under their wing.

Through the Ukrainian Partnership Program, Nazareth College has offered to host an Ostroh student each spring semester for the next five years. Most recently, Christine Hoshowsky, president of the Rochester Ukrainian Group, visited Ostroh Academy and met with Rector Ihor Pasichnyk to help promote and strengthen the partnership between the Rochester community and Ostroh.

Mr. Baida recently presented Rector Pasichnyk with a special non-traditional embroidery created by Kathy Sydor that depicts the name Ostroh Academy; the date 1576, when Prince Vasyl-Kostyantyn of Ostroh founded the first higher educational establishment of the eastern Slavs; and the date 1994, when Ostroh Academy was revived in an independent Ukraine.

The National University of Ostroh Academy, the successor of the Ostroh Slavic, Greek and Latin Academy, became one of the leading centers of higher education in Ukraine thanks to the unwavering leadership of Rector Pasichnyk, who visited the Greater Rochester community twice during the past several years.

Nazareth College was established in 1924. It has earned widespread popularity for training professionals in the fields of liberal arts and fundamental sciences, taking into consideration the future economic and spiritual needs of the world. The college offers over 40 bachelor’s and master’s degree programs.