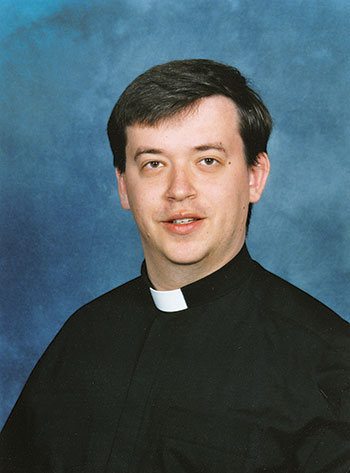 The new bishop has been assigned the Titular See of Germaniciana.

The Very Rev. Andriy Rabiy currently serves as vicar general and as vice-chancellor for the Ukrainian Catholic Archeparchy, and as a dean of the Lehigh-Schuylkill Deanery in Pennsylvania. He is also a member of the College of Consultors, the Archieparchial Finance Advisory Council, the Presbyteral Council, the Archieparchial Administrative Council and Administrative Board at the Pennsylvania Conference of Bishops.

He was born on October 1, 1975, in Lviv. His parents, Anton and Iryna Rabiy, reside in Zymna Voda, Lviv region of Ukraine. He has one younger brother, Vitaliy, who is married to Iryna. The couple and their two children live in Ukraine.

Andriy Rabiy graduated from Zymna Voda High School No. 1 in 1992. In the fall of that year, he entered Ivano-Frankivsk Seminary, where he studied philosophy for two years. In August 1994 he moved to the United States to continue his studies at St. Josaphat Ukrainian Catholic Seminary while attending classes at the Catholic University of America in Washington. Following completion of a one-year program studying English at the Metropolitan College of the Catholic University, he was enrolled in the School of Philosophy and Religious Studies at that university. He graduated in May 1999 with a bachelor’s degree in philosophy.

He was ordained as a subdeacon in May 1998, and as a deacon in November 1999 by Archbishop Stephen Sulyk. He received his presbyteral orders from Archbishop Stefan Soroka in December 2001 in the Ukrainian Catholic Cathedral of the Immaculate Conception in Philadelphia.

In the fall of 2005, Father Andriy returned to the Catholic University of America in Washington for studies in canon law. In 2008, he graduated with a Licentiate in Canon Law, having completed his dissertation on the patriarchal tribunal in the Eastern Church.

Since 2008, he has served as pastor of Nativity of the Blessed Virgin Mary Church in Reading, Pa., where he successfully relocated the parish. He also serves St. Andrew the Apostle Church in Lancaster, Pa., a newly formed mission parish which he began in February 2013.

The newly nominated auxiliary bishop Andriy Rabiy will be ordained by Patriarch Sviatoslav during the opening hierarchical divine liturgy for the Synod of Bishops to take place on Sunday, September 3, at St. George Ukrainian Catholic Cathedral in Lviv. Co-consecrators will be Archbishop Soroka, metropolitan of Philadelphia, and Bishop David Motiuk, eparch of the Edmonton Eparchy in Alberta. The newly ordained Bishop Andriy will then participate in his first meeting of the Synod of Bishops.