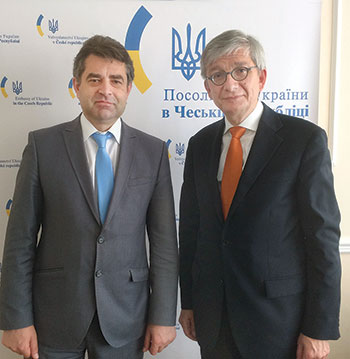 TORONTO – The president of the Ukrainian World Congress, Eugene Czolij, traveled to Germany, Switzerland, Poland and the Czech Republic at the end of June and in July to meet with high-ranking state officials and representatives of civil society, and to participate in commemorations of the 50th anniversary of the UWC.

The UWC – the international coordinating body for Ukrainian communities in the diaspora – was founded in 1967 in New York as the World Congress of Free Ukrainians. Today it represents the interests of over 20 million Ukrainians and has ties with Ukrainians in 53 countries.

Mr. Czolij began a working visit to Germany, on June 30. In Munich, he met with the president of the Bavarian Parliament, Barbara Stamm, and high-ranking officials of Bavaria to discuss support for Ukraine and securing peace and stability in Europe.

During the meetings, the UWC president thanked Germany for its leading role in the Normandy-format negotiations geared toward peace n Ukraine, and its support for Ukraine in various areas, including humanitarian aid.

Mr. Czolij called upon Germany to continue actively promoting the defense of the territorial integrity of Ukraine and maintaining pressure on the Russian Federation until it fully complies with the Minsk agreements and de-occupies Crimea. He also urged greater interest in issues concerning Ukrainian political prisoners in Russian-occupied Crimea, the Donbas and the Russian Federation itself.

Taking into account that a component of the hybrid war of the Russian Federation is disinformation designed to present Ukraine as a failed state, Mr. Czolij spoke about the significant progress made by Ukraine that is reforming, modernizing, integrating with Europe, battling corruption and has great potential for economic development.

In addition, Mr. Czolij called upon the governing authorities of Bavaria to work more closely with the Association of Ukrainian Organizations in Germany (AUOG), particularly in the framework of cooperation between the twin cities of Munich and Kyiv.

During his meetings, the UWC president was accompanied by president of the AUOG, Lesya Shramko; the director of the UWC Mission to International Organizations in Brussels, Maryna Iaroshevych; and Consul of Ukraine in Munich Dmytro Shevchenko.

Also on June 30, Mr. Czolij participated in the commemoration of the 50th anniversary of the UWC organized by a UWC member organization, the Association of Ukrainian Organizations in Germany (AUOG), led by Ms. Shramko.

The UWC president delivered the keynote address during a commemorative banquet held at the Ukrainian center. In his address, Mr. Czolij noted the accomplishments of the UWC throughout its history of one half century, highlighted the priorities of the UWC for the future and called upon the Ukrainian community in Germany to continue working with the UWC, primarily in supporting Ukraine in the defense of its territorial integrity.

The commemorative program included the presentation by the UWC president of certificates of recognition, the screening of a short documentary film, “50 Years of the Ukrainian World Congress,” and performances by local Ukrainian artists.

The next day, Mr. Czolij visited the Ukrainian heritage school headed by Director Olena Yust, and spoke to the students. He also visited the village of Puch, where he attended divine liturgy celebrated by Bishop Petro Kryk in memory of St. Edigna, granddaughter of Kyivan Rus’ Prince Yaroslav the Wise. Mr. Czolij addressed the Ukrainian community of Puch and together with Ms. Shramko gifted an icon of St. Princess Olha to the chair of the Edigna Community Organization.

The UWC president also visited the Ukrainian Free University (UFU), where he discussed cooperation between the UFU and the UWC with Rector Maria Pryszlak and Chancellor Andriy Dovhaniuk.

Next on the UWC president’s itinerary was Switzerland. On July 2 he traveled to Zurich, where he met with the local Ukrainian community.

He attended divine liturgy at the Crypt of the Church of Our Lady and met Fathers Nazariy Zatorskyi and Ihor Rantsya of the Paris Eparchy of St. Volodymyr the Great, the territorial diocese for the Ukrainian Catholic Church in France, Belgium, Netherlands, Luxembourg and Switzerland. He also attended a community luncheon during which he spoke about the 50-year history of the UWC.

On July 3-4 it was on to Bern, where Mr. Czolij held meetings with the federal chancellor of Switzerland, Walter Thurnherr, high-ranking government officials and the Ukrainian community during which he promoted the fundamental values of civilization, and specifically the principles of the territorial integrity of states, and respect for and protection of human rights.

During his meetings, the UWC president noted the significance of the non-recognition by Switzerland of the illegal occupation of Crimea and the implementation of restrictive measures to prevent the circumvention of European Union sanctions against the Russian Federation for its gross non-compliance with the Minsk agreements. He called on Switzerland to continue assisting Ukraine in restoring its territorial integrity. Mr. Czolij also called for further efforts to secure the release by the Russian Federation of Ukrainian political prisoners and an end to the human, national and religious rights violations perpetrated against the residents of the occupied territories of Crimea and eastern Ukraine.

The UWC president thanked Swiss authorities for the technical and humanitarian assistance provided in the framework of the Swiss Cooperation Strategy for Ukraine 2015-2018 in the amount of nearly 100 million Swiss francs.

While in Bern, Mr. Czolij met with the Ukrainian community, spoke about the work of UWC during its 50 years of activity and presented certificates of recognition.

In Geneva on July 5, the Ukrainian World Congress leader met with high-ranking representatives of international organizations and participated in a commemorative evening on the occasion of the UWC’s 50th anniversary, delivering the keynote address.

In his address, Eugene Czolij highlighted the accomplishments of the UWC in furthering Ukrainian interests, drew attention to future plans and urged the Ukrainian community in Switzerland to continue working with the UWC to support Ukraine in defending its territorial integrity.

The commemorative program included a screening of “50 Years of the Ukrainian World Congress.”

During his meetings in Geneva Mr. Czolij called for the international community to ensure respect by the Russian Federation of the U.N. Charter and fundamental human rights. He noted the importance of international aid in response to the humanitarian needs in Ukraine resulting from Russia’s aggression, including the overwhelming number of internally displaced persons.

He was accompanied by Ambassador Yurii Klymenko of Ukraine’s Permanent Mission to the U.N. Office Branch and Other International Organizations in Geneva; and the mission’s first secretary, Olha Kavun.

On July 6-8, Mr. Czolij traveled to Poland on a working visit during which he attended an event of the summit of the Three Seas Initiative, participated as a panelist in the 360/OS Open Source Summit and addressed a commemoration of the 50th anniversary of the UWC. He also held meetings with government officials, representatives of civil society and the Ukrainian community.

On July 6, the UWC president was in Krasinski Square in Warsaw when U.S. President Donald Trump in his address specifically stated: “We urge Russia to cease its destabilizing activities in Ukraine and elsewhere…”

In addition, on the invitation of President Andrzej Duda of Poland, Mr. Czolij attended a gala evening on the occasion of the summit of the Three Seas Initiative.

On July 7, he spoke on the topic of disinformation in a panel discussion titled “What the Fact?” during the 360/OS Open Source Summit organized by the Atlantic Council’s Digital Forensic Research Lab. He also attended a closing reception during which the Atlantic Council presented its Freedom Awards.

On July 6 and 7, the UWC president held meetings with high-ranking state officials and representatives of Polish civil society during which he recognized Poland’s support for Ukraine in the fight against Russian aggression and in furthering the processes of European and Euro-Atlantic integration. During the meetings, Mr. Czolij also raised issues in the common history of the Ukrainian and Polish peoples, including the anti-Ukrainian Akcja Wisla, the 70th anniversary of which is being marked this year.

Speaking with Bishop Artur Mizinski, the secretary general of the Conference of Bishops of Poland, Mr. Czolij presented the book “Facts of the Przemysl Archeparchy. Ukrainian-Polish Reconciliation in Documents of the Clergical Hierarchy” and underscored the Christian approach to resolving issues of the common historical past.

On July 8, Mr. Czolij addressed a 50th anniversary commemoration of the UWC in Warsaw organized by a UWC member organization, the Union of Ukrainians in Poland, which is led by Petro Tyma. The program included presentations of UWC certificates of recognition and the screening of a short documentary about the Ukrainian World Congress.

Mr. Czolij also met with leaders of the Ukrainian community in Poland to discuss strategic issues of continued cooperation and the organization on August 15 in Warsaw and Łańcut of events to honor Maj. Gen. Mark Bezruchko of the Ukrainian National Republic’s army, who in 1920 near Warsaw helped stop the advance of the Bolshevik army into Europe.

On to the Czech Republic

In Prague, on July 9-11, Mr. Czolij met with high-ranking state officials of the Czech Republic and representatives of civil society, and participated in anniversary celebrations of the UWC.

On July 9 he attended divine liturgy at St. Clement Ukrainian Greek-Catholic Cathedral and learned about Ukrainian religious life in Prague during a meeting with Father Vasyl Slyvotskyi.

On that day he also participated in a commemoration of the UWC’s 50th anniversary at an event organized by a UWC member organization, Ukrainian Initiative in the Czech Republic, led by Viktor Rajcinec. In his address, he highlighted the accomplishments of the UWC and future priorities. “50 Years of the Ukrainian World Congress” was shown.

The UWC leader also visited a summer recreational camp organized by the Ukrainian community in the Czech Republic for orphans whose parents were killed defending eastern Ukrainian territories.

During the next two days, Mr. Czolij had a series of meetings with high-ranking officials and representatives of civil society to whom he expressed gratitude for the Czech Republic’s assistance to Ukraine in the fight against Russian aggression and in furthering European integration.

He also thanked the governing authorities of the Czech Republic for bringing to trial the so-called honorary consulate of the Donetsk People’s Republic, the activities of which the regional court in Ostrava ruled illegal on the grounds that it violated international law. Taking into account that the Czech Republic currently heads the Council of Europe, the UWC president encouraged support for the release of Ukrainian political prisoners held by the Russian Federation and the deployment of a Council of Europe observer mission (or a joint mission with the Organization for Security and Cooperation in Europe) to Crimea.

In addition, Mr. Czolij called upon the Czech Republic to recognize the Holodomor of 1932-1933 as an act of genocide against the Ukrainian people. He also raised the issue of the replacement of the Museum of the Liberation Movement of Ukraine, which was destroyed during World War II, and access to a government program on the maintenance of graves.