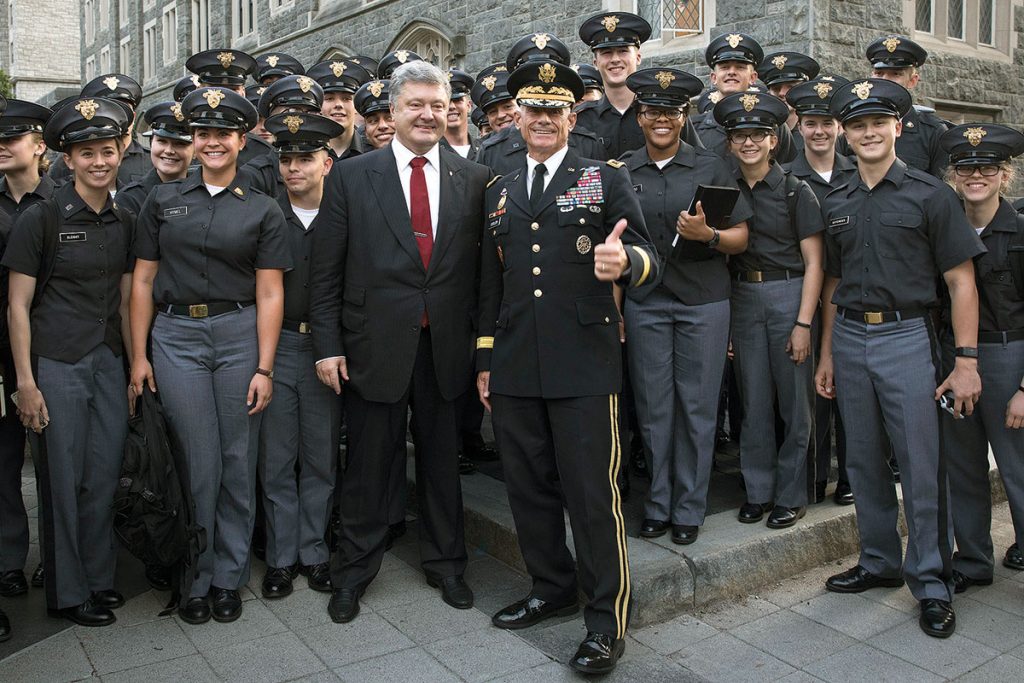 WEST POINT, N.Y. – President Petro Poroshenko of Ukraine visited the U.S. Military Academy at West Point in the course of his recent working visit to the United States. He had a chance to interact with the academy’s leaders as well as students.

In his meetings at the academy on September 19, Mr. Poroshenko underscored that Ukraine is struggling both for its land and for the freedom of the world. “The whole world is with us and we have an effective instrument – sanctions against the Russian economy,” he noted in response to questions posed after his address to the student body.

He also explained that “Russia’s illegal annexation of Crimea and aggression in the east of my country completely destroyed the post-war world security, which was based on the U.N. Security Council, “ adding that “one of the permanent members of the Security Council, who has the right to veto, became an aggressor.”

The president also reminded his listeners that in 1994 Ukraine gave up the third largest nuclear arsenal in the world, having received guarantees of security from the signatories of the Budapest memorandum.

Mr. Poroshenko said that it was a great pleasure for him to be in such a prominent place filled with feelings of duty and honor, aspirations for freedom, democracy and dignity.

“The centuries passed, and we thought that oppression, aggression and disrespect for human freedoms were already in the past. In fact, the world was moving towards progress. However, unfortunately, Russia is still lost in the 18th century, unable to get rid of the legacy of tyranny. With hybrid terror and cowardly aggression, Moscow cannot accept the sovereignty of Ukraine and wants to suppress the will of the Ukrainian people and our freedom. Today, Ukraine is on the forefront for its independence, the future of the world of free nations and is among those who are struggling for a new and better world order,” the president said.

He said that three years ago, when Crimea was occupied and the Donbas was invaded, nobody believed that Ukraine could withstand the aggression of Russia. “We are proud that many Ukrainians from all over the world rallied to defend their historic homeland,” Mr. Poroshenko continued, and he pointed out that an alumnus of West Point was among them. “Immediately after the beginning of Russia’s aggression against Ukraine in 2014, Mark Paslawsky, nom-de-guerre Franko, left the United States and joined the struggle for our freedom,” he said. Sadly, he noted, the hero was killed in action near Ilovaisk in eastern Ukraine.

President Poroshenko invited representatives of West Point to join the military education project in Ukraine through partnership with one of the Ukrainian military institutes. “We are waiting for you in Ukraine, where you can learn more and get your own experience of the hybrid war,” he noted.

In his speech to West Point cadets, the president gave examples of successful military cooperation between Ukraine and the United States, and said that battalions prepared by American instructors have showed the best tactics and the lowest level of casualties during hostilities. “Due to the technical equipment already provided by the United States, the number of victims among the Ukrainian soldiers has significantly decreased, and thanks to the new defense technology, we can save more lives, both civilian and military,” he added.

Mr. Poroshenko also praised the courage, perseverance and invincible will of Ukrainian veterans and recalled that last year a team of four wounded Ukrainian soldiers took part in the U.S. Marine Corps Marathon for the first time. Two of them underwent rehabilitation at the Walter Reed National Military Medical Center.

“In a few days the Ukrainian team will also take part in the Invictus Games in Toronto. Their bright and extraordinary example encourages us that a country with such people and such support from our American partners will inevitably win,” President Poroshenko stated.