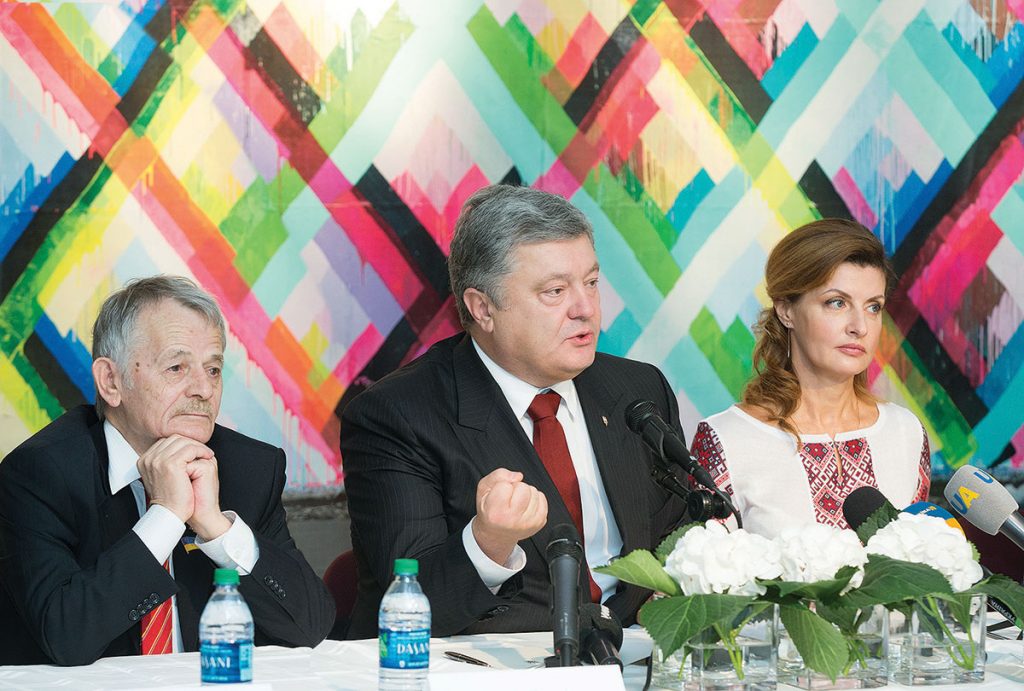 Presidential Administration of Ukraine
At The Ukrainian Museum for a meeting with Ukrainian community leaders and Crimean Tatar representatives (from left) are: Mustafa Dzhemilev, commissioner of the president of Ukraine for the affairs of Crimean Tatars, President Petro Poroshenko and First Lady Maryna Poroshenko.

NEW YORK – President Petro Poroshenko and his wife, Maryna Poroshenko, met with leaders of the Ukrainian community and representatives of Crimean Tatar organizations in the United States. The presidential couple toured The Ukrainian Museum in New York.

Mr. Poroshenko recalled the creation of the new Ukrainian army, inter alia, with the assistance of Ukrainians in the diaspora. He noted the steps of the U.S. Congress to help Ukraine, including its approval of defensive lethal weapons.

“This is not just a position that helps increase the price the Russian aggressor will pay for assuming the offensive. It also opens an opportunity for the United Kingdom, Canada and other countries to provide the same assistance for us. We are waiting for the political decision by the United States,” the president said adding that huge progress had already been achieved in the negotiations.

He stressed: “Another importance of defensive weaponry is not just Javelin anti-tank missiles, we produce the Stugna missile, which has a different principle, but still is very efficient. We are talking about a radioelectronic warfare system that presents irrefutable evidence of Russia’s crimes to the world – from where they open fire to kill our civilians, where and when, what is the caliber of the heavy weaponry they brought, contrary to the Minsk agreements. After all, this evidence will help us form a legal position when the crimes of Russia will be considered at The Hague.” The president emphasized that “it is not just weaponry, but a legal instrument of protecting the Ukrainian position” that are important.

“Ukrainians are a peaceful nation. We do not want to kill anyone, but our state has paid a huge price – over 10,000 Ukrainians, including 2,700 Ukrainian warriors killed,” President Poroshenko noted.

He emphasized that Ukrainians are a European nation and thanked the Ukrainian diaspora in Europe for the joint work that led to the ratification of the Association Agreement with the European Union and the beginning of its implementation.

Mr. Poroshenko also spoke about the course of reforms in Ukraine. In particular, he cited the recently approved educational reform. The president added that the Verkhovna Rada would continue consideration of judicial reform to create an independent judicial institution and return the right to truth to the people of Ukraine.

The president focused special attention on the importance of supporting the Crimean Tatars. “We must jointly demonstrate that the problem of the Crimean Tatars is our common problem, that we are united and preserve solidarity. We are not going to put up with the actions of the aggressor and invader,” he stated.

Mr. Poroshenko also cited the 85th anniversary of the Holodomor and the importance of recognizing it as genocide. “We do not only defend Ukraine and Ukrainians who gave life for our independence, but also remember our history,” he noted.

Andriy Futey, president of the Ukrainian Congress Committee of America, said that the Ukrainians present at the meeting make great effort to help their ancestral homeland and to defend the rights and freedoms of Ukrainians irrespective of their place of residence. He assured the audience: “Our goal is one united community that can influence the decisions of the U.S. government and Congress as regards their foreign policy and, thus, help in your bilateral efforts.”

Editor’s note: Among the community leaders attending the meeting was President Stefan Kaczaraj of the Ukrainian National Association, which publishes The Ukrainian Weekly and Svoboda.