Support for Ukraine main theme at commemoration in Illinois 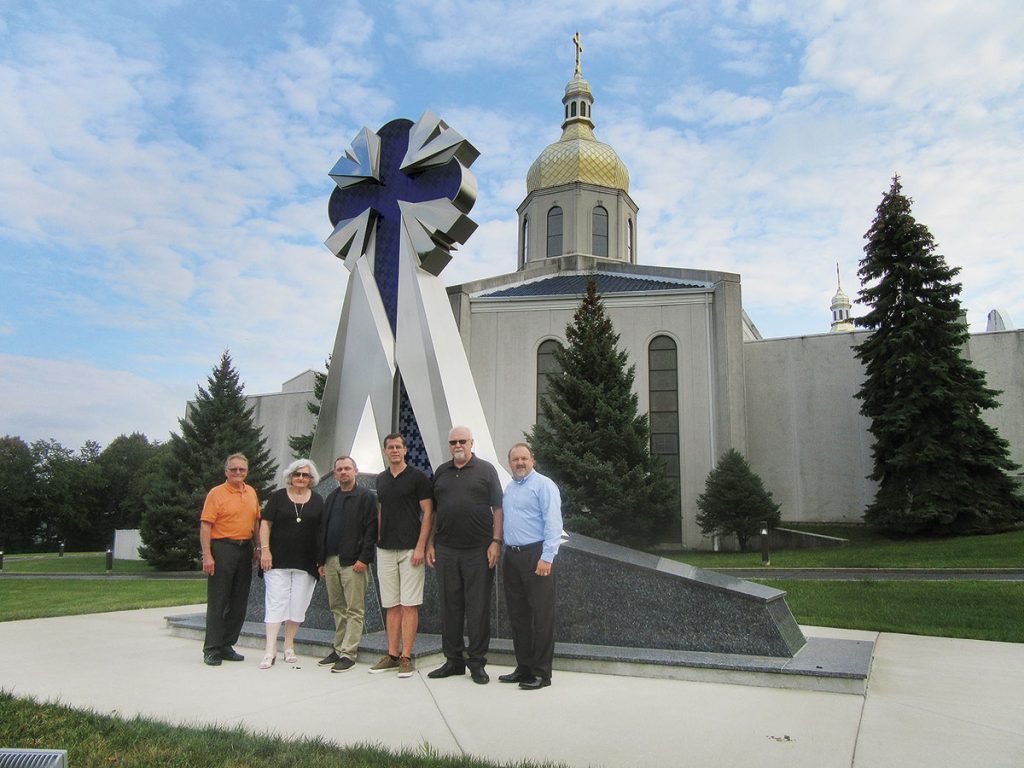 CHICAGO – The 26th anniversary of renewed Ukrainian independence was celebrated on August 26-27 with the traditional raising of the flag at Daley Plaza and the Ukrainian Days Festival in the newly selected venue in the heart of Ukrainian Village.

The Ukrainian community was honored by the participation of Consul General of Ukraine in Chicago Larysa A. Gerasko and members of the Chicago Consular Corps.

The community hosted three guests of honor: Andriy Levus (Member of Parliament of Ukraine, chairman of the Subcommittee on State Security of the Parliamentary Committee on National Security and Defense, former vice-commander of Maidan Self-Defense, founder of the Free People network as the first self-defense unit of Euro-Maidan); Serhiy Kuzan (an attorney by training, vice-president of the Free People civic organization); Borys Potapenko (president of the International Council in Support of Ukraine; member of the Ukrainian Congress Committee of America and the Ukrainian Canadian Congress).

In his address to the attendees National Deputy Levus stated “…26 years ago Ukraine resumed de jure statehood. We had all the attributes of statehood – constitution, flag, anthem, borders, currency – but were not masters of our country. Key mechanisms of politics, economy, security and military were controlled by Russia and its protégés in Ukraine. It is this latter control that has allowed the ruin of our country from the inside.”

“We have huge difficulties, but steadily and consistently, step by step we are creating a new reality – Ukraine as a country of free people, who know what they want, know how to win, but appreciate help from friends in the difficult hour,” he noted. “We are working on getting rid of corruption, the inefficiency of state mechanisms, the tendency toward populism and finding easy answers to complex problems… Ukraine needs large-scale constitutional reform.” He concluded, “we are confident that we will be able to overcome and build a comfortable, strong and truly independent Ukraine.”

Mr. Kuzan explained the mission of the Free People humanitarian network in Ukraine. Following the occupation of Crimea and the attack on the Donbas region of Ukraine, many members of the Euro-Maidan Self-Defense set out to form and join volunteer battalions, National Guard units or the Special Forces of the Ministry of Internal Affairs. Given that the state coffers were looted by the former regime, Free People was organized to provide defense forces with material support to carry on the fight against Russian military occupation by providing humanitarian assistance to the troops at the frontlines and in the forward bases.

Free People is registered with the government of Ukraine and works in cooperation with the national government and local units of the Ministry of Defense, Ministry of Internal Affairs and the National Security and Defense Council of Ukraine. The Free People network has supplied soldiers with everything from personal items to non-lethal military equipment received from donors in Ukraine, Canada, Poland, Germany, the U.S., Israel, Italy, Spain, Lithuania, Belarus and Russia, he noted.

Mr. Potapenko took the opportunity to speak briefly about the advocacy work of the International Council in Support of Ukraine. Mr. Potapenko stated: “We, as Ukrainian Americans, need to openly discuss our nation’s security and defense strategy. We must help America resolve to deal effectively with the threats in far flung regions of the world and prioritize and confront the existential danger posed to the U.S. by Russia’s war in Ukraine.”

He continued: “Russia invaded and occupies for three years now the territory of one of the largest European countries – Ukraine… Russia has stepped up intimidation of NATO member states in Central and East Europe to destabilize the Euro-Atlantic partnership… U.S. and Canadian borders have not been immune from Russian military probing… We need to call for the U.S. to return to a position of leadership in global affairs where our foes fear us, our friends trust us and where all respect our national will and military capacity to defend U.S. interests.”

He also called on the United States to provide additional economic, humanitarian, and military assistance to Ukraine, including lethal defensive weapons; and to mobilize Europe and the international community to impose much greater sanctions against Russia until Ukraine’s territorial integrity is fully restored.

Mr. Potapenko indicated that the Ukrainian American community in Chicago and nationwide is well positioned to communicate with government officials, both Republican and Democratic. Our fellow Americans need to be made aware of the vital importance of the U.S.-Ukraine strategic partnership in overcoming the dangers that Vladimir Putin’s Russia poses to both America and Ukraine, he said.

Messrs. Levus and Kuzan visited St. Andrew Ukrainian Orthodox Cathedral – Kyiv Patriarchate in Bloomingdale, Ill. On premises of the parish, President John J. Jaresko and members of the church board familiarized the guests from Ukraine with the monument to the Heavenly Brigade and all heroes of Ukraine which was authorized for construction in 2015 by the St. Andrew Church Council in memory of those who perished violently during the Maidan Revolution of 2013-2014 in Kyiv and all heroes of Ukraine who sacrificed their lives for a free and independent Ukraine. It stands as a symbol of support for those who are currently at war with Russia in eastern Ukraine. This is the only such monument in the United States.

Also on the parish property is the Ukrainian Genocide Famine Memorial, constructed in the mid 1980s to commemorate the 10 million victims of death by forced starvation perpetrated by Joseph Stalin in 1932-1933 Ukraine.

The third point of interest for guests from Ukraine was the section of the St. Andrew Cemetery that serves as the final resting place of patriots and freedom fighters of the Organization of Ukrainian Nationalists and the Ukrainian Insurgent Army who sacrificed their lives for a free and independent Ukraine. 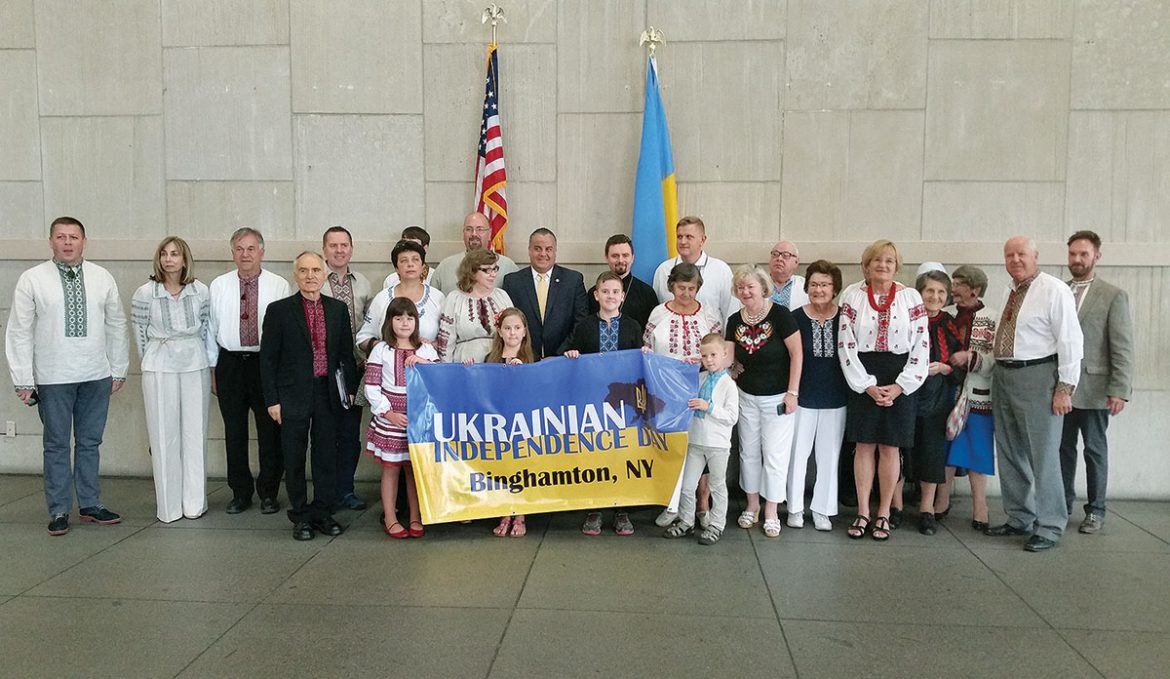 BINGHAMTON, N.Y. – The local branch of the Ukrainian Congress Committee of America organized its annual Ukrainian Independence Day celebration at Binghamton City Hall on August 24. The ceremonial flag-raising was emceed by Victor Czumak, who was joined by Mayor Richard David, the Revs. Teodor Czabala of Sacred Heart Ukrainian Catholic Church and Ivan Synevsky of St. John the Baptist Ukrainian Orthodox Church, and Anatolij Pradun of First Ukrainian Pentecostal Church, who spoke for Pastor Nikolay Ilchishin. Mr. Czumak recited the “Prayer for Ukraine” in English and it was sung in Ukrainian by Eugene Czebiniak. Commentaries were submitted by Taras Stets and Stephan Wasylko, whose statement was read by Lubomyr Zobniw. The Ukrainian Independence Day ceremony, which has continued since 1950 on different dates, concluded with the recitation of the “Pledge of Allegiance” and the singing of the Ukrainian national anthem.