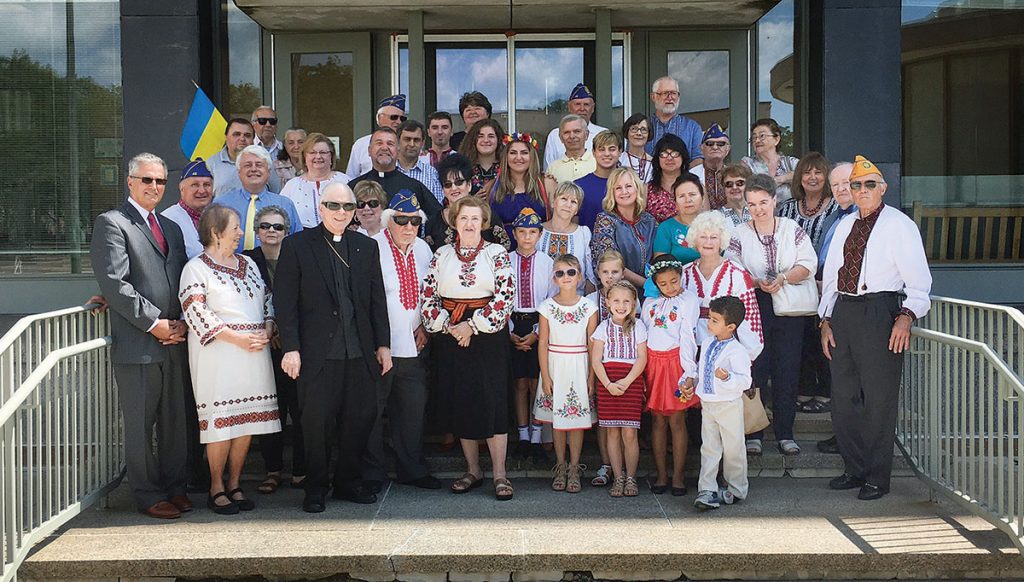 Jaroslaw Chorwat led the Allentown program, which began with the raising of the Ukrainian flag in front of City Hall by Ukrainian American Veterans Post 42 member Viktor Litkewycz. Jerry Kindrachuk delivered the keynote address and Mayor Ed Pawlowski presented a proclamation from the city of Allentown. Proclamations from the district’s state and federal representatives were also read by their respective staff members.

Later that day in Bethlehem, Oksana Koziak welcomed the attendees on behalf of Branch 91 of the Ukrainian National Women’s League of America and turned the program over to Oksana Kipa, who then led the proceedings. The American and Ukrainian flags were raised by UAV Post 42 members Messrs. Chorwat and Litkewycz, while the national anthems were sung by Carol Hanych, cantor of St. Josaphat’s Ukrainian Catholic Church in Bethlehem.

Bethlehem Mayor Robert J. Donchez addressed the audience and presented a proclamation from the city of Bethlehem. This was followed by a proclamation and address by State Rep. Samuelson. Mr. Kindrachuk delivered the keynote address titled “Ukraine Today.”

Oksana Satkanitch delighted the audience, singing two Ukrainian songs, “Cranes Drinking Water” and “A Woman’s Fate.” Father Troyan ended the program with a prayer and a blessing for Ukraine. U.S. Rep. Charlie Dent (R-Pa.) then arrived to present his greetings and congratulations.