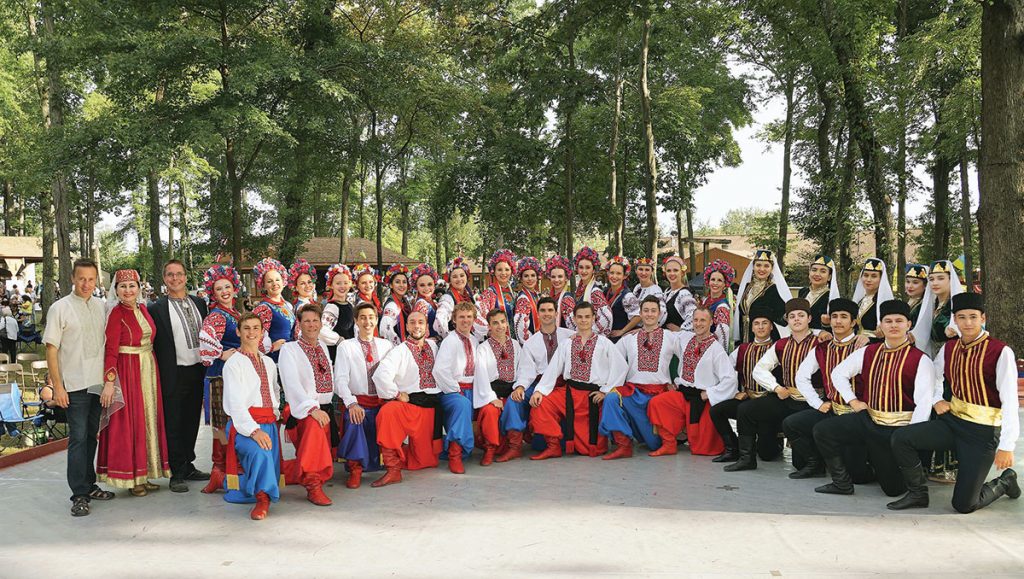 Christine Syzonenko
Members of the Efsane, Iskra and Voloshky ensembles in a group photo.

HORSHAM, Pa. – Over 2,500 attended the 26th Annual Ukrainian Independence Folk Festival, on Sunday, August 27, at the Ukrainian American Sport Center – Tryzubivka. On this stellar, gorgeous summer afternoon, a cool shady festival glade – adorned with the flags of the United States and Ukraine and with the vibrant and colorful Ukrainian embroideries, folk arts and crafts, jewelry, emblems, motifs and wares displayed by the vendors – welcomed a very diverse crowd of festival-goers.

Ukrainians, hailing, directly or through ancestry, from nearly all regions of Ukraine, demonstrated solidarity with their homeland and its people through their spirited attendance, clothing and accessories: beautiful embroidered shirts and blouses, flags, tryzubs, Ukrainian sports and thematic jerseys.

Many non-Ukrainians who attended came to experience the culture and history of a people that dares to defy Vladimir Putin and his formidable arsenal of soldiers, arms, tanks, artillery, naval and air forces, and advanced resources for foreign intrigue, and deception.

A bountiful Ukrainian kitchen and BBQ grill served festival-goers tasty meals and desserts. An assortment of tap beers, wines, spirits and other refreshments added to the flavors of the day.

The Kuban Kozak Society of New Jersey, as well as the Banner of Jasna Gora historical re-enactment group, provided living, walking and talking displays of the clothing, armor, armaments and daily wares from Ukraine’s Kozak era. Their presence and presentation of arms on stage during the festival concert’s opening ceremonies was a reminder of the struggle of Ukraine’s Kozaks for the freedom, independence and dignity of the Ukrainian homeland and its people.

Danylo Nysch, president of the Philadelphia Ukrainian Nationals, Tryzub’s soccer program, and Anatoli Murha and Yuliya Stupen, representatives of chief festival sponsor, the Ukrainian Selfreliance Federal Credit Union of Philadelphia, greeted the audience and introduced this writer as the concert’s master of ceremonies.

Ukrainian American Veterans Posts 1 (Philadelphia) and 42 (Lehigh Valley), dedicated respectively to the memories of Anthony Bilyi, a young Ukrainian American who sacrificed his life defending Pearl Harbor, and Wolodymyr Palahniuk (Jack Palance), presented the colors. Included was the flag of Crimea and its indigenous Crimean Tatars.

Guest soloist Ms. Stupen of Philadelphia delivered masterful renditions of the American and Ukrainian national anthems.  The hymn of the Crimean Tatars was played as well.

Then, a tremendous cast of performers presented a briskly paced program of Ukrainian music, song and dance.

As is the tradition at Tryzub, the artists themselves, spearheaded by Voloshky and Iskra Ukrainian Dance Ensembles’ artistic directors, Taras Lewyckyj and Andrij Cybyk, and by Efsane Crimean Tatar Ensemble’s artistic director, National Artist of Crimea, Dinara Faisova, designed, created and executed an integrated collaborative concert program.  The artistic unity underscored the theme: “United Ukraine; United with Us.”

Repeatedly, the Voloshky and Iskra dancers, at times accompanied by Innesa Tymochko Dekajlo’s vibrant violin, took to the stage and danced together, as one ensemble.

The featured performer, Honored Artist of Ukraine Iryna Lonchyna, a singer-songwriter from Ivano Frankivsk, gave an awesome performance of a vibrant mix of her own works and well-known Ukrainian folk tunes.

Throughout the concert, there were greetings from many interesting guests: Vladyslava Bondarenko, counsellor for Ukrainian community outreach of the Embassy of Ukraine,who read a letter of greetings from Ambassador Valeriy Chaly; Congressman Brian Fitzpatrick (R-Pa.); Philadelphia Court of Common Pleas Judge Carolyn Nichols; Lara Kitain Flynn, regional representative for Sen. Bob Casey (D-Pa.), who read a letter of greeting from the senator; and Aron Momand, president of the Afghani-American community in the U.S. The MC also extended greetings from Congressman Brendan Boyle (D-Pa.) who was kept from attending by a pressing personal matter.

Another stirring moment occurred when Col. Vitaliy Halitsyn of Ukraine’s army addressed the festival-goers. The officer is here for special surgical and restorative treatment for injuries to his eyes that occurred on the Russian front when a mine exploded in his face. An organization by the name of Revived Soldiers Ukraine, a welcome addition to Tryzub’s community service area, had arranged for the colonel to be treated at Will’s Eye Hospital, under the care of Ukrainian American physician Jurij Bilyk. Both the hospital and this fine physician are providing care and treatment pro bono.

Col. Halitsyn drew the audience’s attention to Ukraine’s current struggle for freedom and self-determination. He emphasized that the Ukrainian people can, must and will fully attain and celebrate not only their independence, but also the freedom and dignity that promise to be the progeny of the Maidan revolution. He encouraged everyone to actively assist Ukraine and its people. He expressed heartfelt thanks to the Revived Soldiers organization, its volunteers, Ms. Lonchyna who had arranged an earlier fund-raising concert for the organization, and to Wills Eye and Dr. Bilyk.

Basil Tarasko (“Mr. Baseball,” as he is known to his fellow Tryzub Club members), commissioner of Ukraine Baseball, presented a special award to Tryzub for its work in helping to develop baseball programs in many orphanages in Ukraine.

Towards the end of the program, the Voloshky and Iskra dancers broke out into a majestic “Hopak.” It was a manifestation of the selfless cooperation of the performing artists. One of the highlights was the integration of two Crimean Tatar dancers, mother and son Dinara Faisova Arslanova and Yunus Faisov, into the show-off portion of the “Hopak.”

As the encore music of the “Hopak” continued to play, the MC called all of the performers to the stage for a final good-bye. Jurij Matolak of Vox Ethnika led all in a rousing “Mnohaya Lita.” Shouts of “Glory to Ukraine” and “Glory to its Heroes” closed the concert.

A vibrant dance at the outdoor pavilion followed to the tunes of Vox Ethnika. Throughout the day, festival-goers were able to visit the vendors’ grove which was chock full of Ukrainian arts and crafts. Face painting, caricature drawings and a myriad amusements were available for “kids of all ages.”