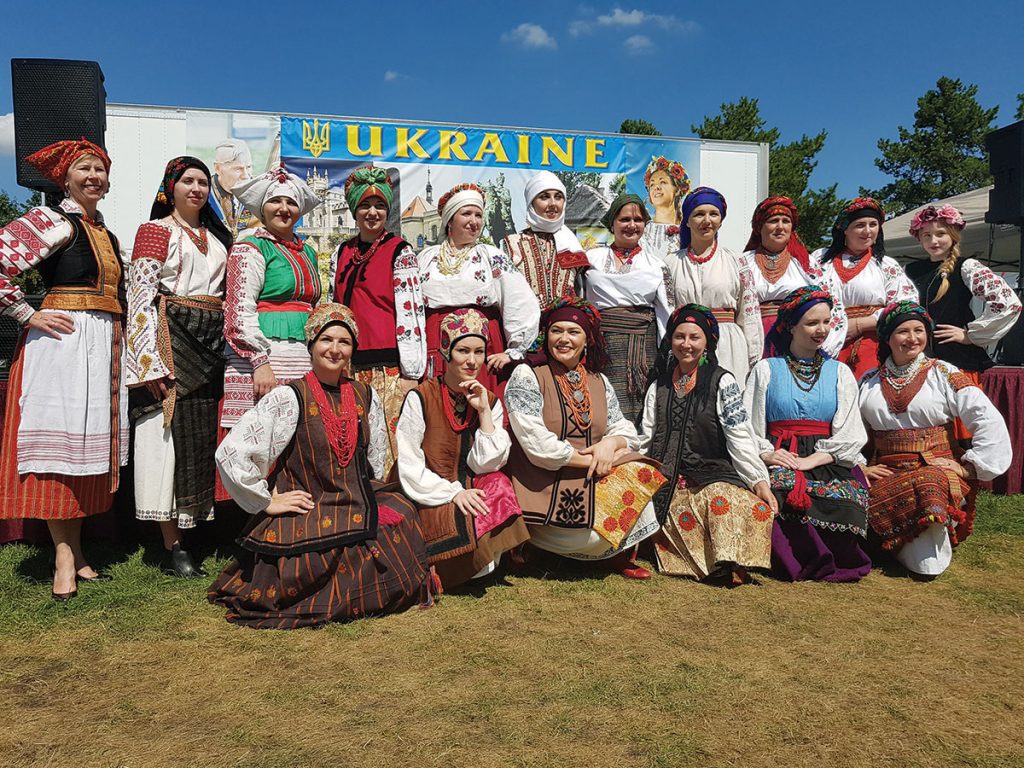 EDMONTON, Alberta – Where does one see an elderly couple get up to dance to the modern music of two young musicians recently settled in Canada? Where do a young Alberta members of the legislative assembly and her sister dance in the pouring rain to the traditional tunes of Ukrainian Canadian old-timers? Answer: At the Ukrainian Pavilion at the Edmonton Heritage Festival.

The Ukrainian Pavilion at the Edmonton Heritage Day Festival, which took place on August 5, 6 and 7, was a big success in spite of less-than-ideal weather.

The weather on Sunday was perfect and crowds filled Hawrelak Park. An estimated 375,000 people attended on that one day, breaking the attendance numbers for all three days in years past.

Saturday and Monday had less favorable weather with rain on both days. Still, people did come and the many Ukrainian Pavilion volunteers provided them with delicious food, informative displays of arts and crafts, and non-stop entertainment, which paused only briefly in the most severe downpours. Groups like the New Melody Kings played in the rain, huddled under a canopy rapidly erected on the stage; the arm-wrestling contest, initially delayed, also went ahead under the same canopy.

The Ukrainian entertainment was rich and varied with shows every half-hour for the duration of the festival. The performers included: the Korinnya Ukrainian Choir from Calgary, the Yatran Ukrainian Dance Academy, the KaRAR Performing Arts group of Ukrainian dancers and the Zorianka Ukrainian Dancers.

There were two fashion shows, one showcasing traditional outfits and another displaying modern vyshyvanka (embroidered) clothing. A special part of the modern show featured entire families in their embroidered shirts. Arm wrestling was part of the show, with Ukrainian contestants taking on champions from other pavilions.

The Arts and Culture Pavilion was richly enhanced with museum displays that were organized under the leadership of Elaine Harasymiw, representing the Ukrainian Museum of Canada, Alberta Branch, of the (Orthodox) Ukrainian Women’s Association, and by Evelyn Cook, who represented the Ukrainian Catholic Women’s League Museum. The Canadian Institute of Ukrainian Studies provided a display, as did the Ukrainian Genealogical Project. Ludwig Marianych promoted Ukrainian classes for adults, while Peter Holloway and Daria Polianska showed the websites produced by students at the University of Alberta. These provide interactive Ukrainian materials for elementary education.

Several tables sold embroideries, T-shirts, necklaces and other wares. One of these was a philanthropic organization collecting money for wounded Ukrainian soldiers. One table sold sculptures and showcased two korovai breads that were cut and served to the public on the last day. Laryssa Luciw provided a display with pictures and stories about Ukrainian Canadians, both new arrivals and people who had come with the early migrations to Canada. There were also quizzes which, if answered correctly, won the participant free food.

As always, the food tent was a big hit. People bought and ate pyrohy, kovbasa and borshch for breakfast, lunch and dinner, as well as for snacks in between. The line-ups by the food tent were enormous, even in the rain. The tent sold 29,520 pyrohy and 365 kilograms of sausage, with sour cream and borshch numbers to match. Head chef James Schaub deserves credit for both the wonderful cuisine and the many dedicated and hard-working volunteers who worked cheerfully to make the food tent such a resounding success.

Of course all of these individual contributions would not be possible without Orysia Boychuk, president of Ukrainian Canadian Congress Edmonton Branch, taking on the leadership of this event and Dmytro Petruschak, president of the Friends of the Ukrainian Heritage Festival Society, for coordinating the event.

All are invited to join us next year for an event that both provides an opportunity to showcase Ukrainian Canadian heritage and is a fun way to meet others.