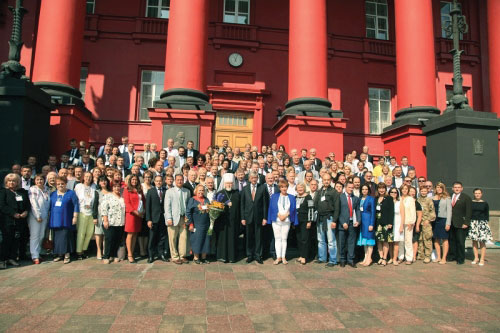 UWC
Participants of the annual general meeting of the Ukrainian World Congress held in Kyiv.

KYIV – The Ukrainian World Congress (UWC) held its 50th anniversary commemoration at the Mystetskyi Arsenal in Kyiv on August 26.

Speaking on behalf of the UWC, President Eugene Czolij enumerated the international organization’s achievements in furthering Ukrainian interests throughout its 50-ayear history. He particularly focused on the activities of the over 20-million strong Ukrainian diaspora headed by the UWC in support of the restoration and consolidation of Ukrainian statehood, and highlighted the current priorities related to the support of Ukraine in countering Russian aggression, and in the realization of its aspirations for European and Euro-Atlantic integration.

President Petro Poroshenko, in his address at the jubilee event, thanked the UWC for its longstanding support of Ukraine and asserted that the UWC is a strong and consolidated voice for Ukraine’s aspirations and its loyal defender worldwide.

The UWC president presented the Ukrainian president with a symbolic gift – an “Angel of Peace” glass sculpture.

The program of the commemoration included a screening of the short documentary film titled “50 years of the Ukrainian World Congress” and a thematic presentation of the most important stages of the UWC history designed by art director Serhii Proskurnia based on material from the travelling exhibit produced by the International Institute for Education, Culture and Diaspora Relations of Lviv Polytechnic National University.

President Poroshenko and Mr. Czolij also had the opportunity to exchange views on further processes related to the European and Euro-Atlantic integration of Ukraine. “The over 20-million strong Ukrainian diaspora headed by the Ukrainian World Congress will continue to actively promote the interests of Ukraine and the Ukrainian people,” Mr. Czolij reaffirmed.

On August 25, participants of the UWC’s annual general meeting took part in a special session at Ukraine’s Ministry of Foreign Affairs that was convened on the occasion of the UWC’s 50th anniversary.

The session was chaired by Foreign Affairs Minister Pavlo Klimkin, who congratulated the UWC on its anniversary and highlighted its contribution to the re-establishment of Ukraine’s independence and consolidation of its statehood, as well as to this year’s historic achievements of Ukraine – the ratification of the European Union-Ukraine Association Agreement and the visa-free regime for Ukrainian citizens to Schengen zone member states.

Minister Klimkin emphasized that Ukrainian diaspora communities are the people’s ambassadors of Ukraine for advancing Ukrainian issues in the world.

The participants were greeted by Patriarchs Filaret and Sviatoslav, Archbishop Yevstratiy of Chernihiv and Nizhyn of the UOC-KP, Minister of Education and Science Liliya Hrynevych, Minister of Culture Yevhen Nyshchuk and acting Minister of Health of Ukraine Dr. Ulana Suprun.

Mr. Czolij emphasized the current priorities of the UWC, foremost among them furthering the consolidation of the international community in support of Ukraine’s defense of its territorial integrity, and the importance of continued effective cooperation between the Foreign Affairs Ministry of Ukraine and the UWC.

Also discussed during this session were the defense of the national interests of Ukraine and countering the Russian disinformation campaign that constitutes part of the hybrid warfare of the Russian Federation against Ukraine.

The participants were also viewed an exhibit of the Central State Archive of Foreign Uсrainica titled “Our Love for Ukraine.”

On August 25-26, the Ukrainian World Congress held its annual general meeting at Taras Shevchenko National University of Kyiv with 206 delegates and guests from 32 countries participating. The meeting adopted the UWC President’s report, which reflected the major activities of the UWC.

Written greetings were received from the patriarchs of the UOC-KP and the UGCC, Ukraine’s president, prime minister, foreign affairs ministers and Verkhovna Rada chairman, as well as the president of the World Federation of Ukrainian Women’s Organizations, and the rectors of Taras Shevchenko National University of Kyiv and Lviv Polytechnic National University.

On August 24-26, participants of the annual general meeting also attended various Ukrainian Independence Day events, including the military parade on Independence Square. They also participated in the inaugural economic forum “Support for Ukraine’s Economic Development: Cooperation between the Government of Ukraine and the Diaspora” on August 25. Also on August 24, the UWC leadership attended a reception at St. Sophia of Kyiv National Reserve.

The UWC annual general meeting adopted a series of resolutions, among them those calling for the ecumenical patriarch to issue a Tomos of Autocephaly to the Ukrainian Orthodox Church – Kyiv Patriarchate; and for the Catholic Church to recognize the patriarchal status of the Ukrainian Greek-Catholic Church.

On August 30, Verkhovna Rada Chairman Andriy Parubiy congratulated the delegates of the UWC’s annual general meeting on the 50th anniversary of the UWC during a joint meeting with members of the Committee on Foreign Affairs and Committee on European Integration held in the Parliament.

Mr. Parubiy noted the important role of the UWC in uniting the over 20 million strong Ukrainian diaspora and the role of the UWC in supporting Ukraine during the process of ratification of the EU-Ukraine Association Agreement and in obtaining a visa-free regime for Schengen area states.

UWC President Eugene Czolij focused on current UWC priorities, which are primarily related to supporting Ukraine in order to overcome Russian aggression, promoting reforms and furthering Ukraine’s membership in the EU and NATO.