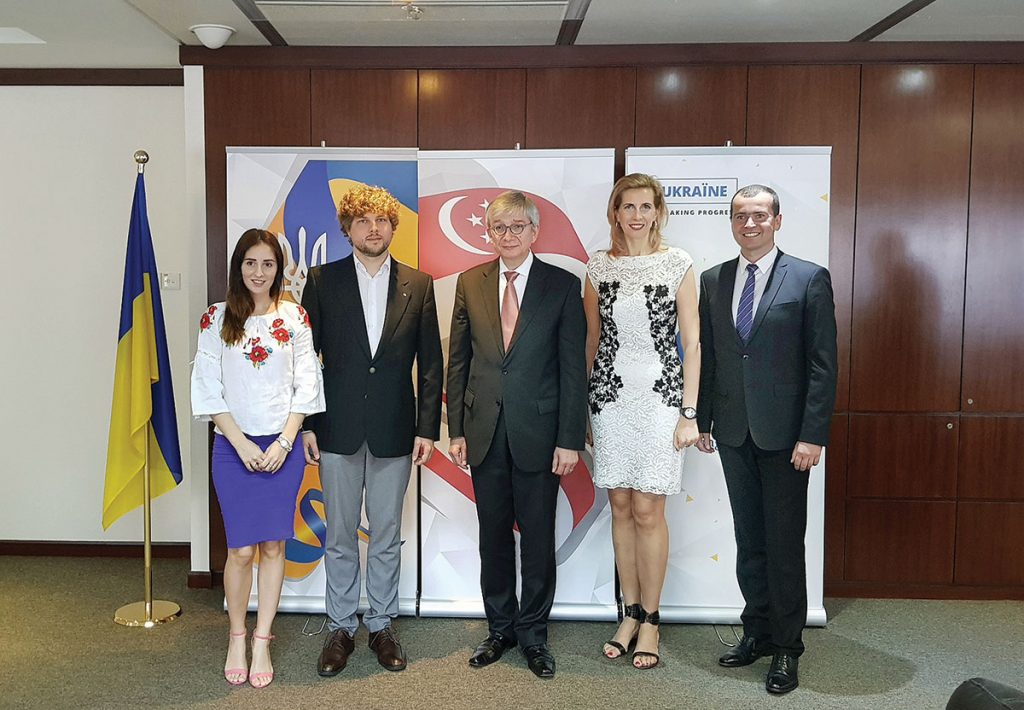 TORONTO – Ukrainian World Congress President Eugene Czolij visited Ukrainian communities in New Zealand, Australia and Singapore in the final days of July and in August. He attended special commemorations of the 50th anniversary of the founding of the Ukrainian World Congress, spoke at various community gatherings and met with top government officials. A key goal of his visits was to strengthen contact with the communities and churches in those countries.

While in Australia Ms. Czolij also delivered a public lecture on August 9 at the Center for European Studies of the Australian National University on the topic of “EU Attitudes Towards Former Warsaw Pact States and Former Soviet Republics.”

The next day, he spoke at a roundtable titled “The UWC at 50 and Beyond: the Australian Context” that was held at the Mykola Zerov Center for Ukrainian Studies at Monash University in Melbourne, Australia.

A first visit to New Zealand

On July 30-31, the UWC president Eugene Czolij, together with his wife, Anna, fulfilled his first visit to Aukland and Wellington, New Zealand, to present current Ukrainian issues to its governing authorities and strengthen ties with the Ukrainian community.

Mr. Czolij met with the manager of the Europe Division at the Ministry of Foreign Affairs and Trade, Rob Taylor, and Member of Parliament Kennedy Graham, who is a member of the Foreign Affairs Committee and spokesperson for Global Affairs of the Green Party.

Mr. Czolij focused attention on the aggressive acts of the Russian Federation in Ukraine, which also pose a serious threat to global peace and security, and called upon New Zealand to support Ukraine in the defense of its independence and territorial integrity. He also discussed the importance of New Zealand adopting the Autonomous Sanctions Bill and introducing sanctions against the Russian Federation, and to refrain from negotiations on a free trade zone with the Russian Federation until it stops blatantly violating its international commitments.

The UWC president expressed gratitude to New Zealand for co-authoring the United Nations resolution on human rights violations in Crimea and on the defense of critical infrastructure from terrorist attacks.

Mr. Czolij also called upon New Zealand to recognize the Holodomor of 1932-1933 as a genocide of the Ukrainian people.

In addition, Mr. and Mrs. Czolij participated in an event in the Parliament of New Zealand during which the local Ukrainian community presented an embroidered map of New Zealand to be displayed in Parliament.

He also had a separate meeting with Mr. Klish and Ms. Vorobey to discuss the possibility of UWC associated membership for their organizations and cooperation in creating an umbrella organization for Ukrainians in New Zealand.

“The trip to New Zealand helped me to better understand the community life of Ukrainians in New Zealand and to strengthen their ties with the Ukrainian World Congress,” Mr. Czolij commented.

Visiting the land down under

On August 7 and 9 in Canberra, the capital of Australia, and August 1 and 10 in Melbourne, the UWC president held meetings with Australian high-ranking government officials to discuss issues related to continued support for Ukraine and securing peace and stability in the world.

Mr. Czolij urged Australia to continue supporting Ukraine in the defense of its territorial integrity and emphasized that, while protecting its borders, Ukraine is actively reforming, modernizing, fighting corruption and exhibiting great potential for economic development.

In addition, Mr. Czolij stressed that the tragic downing of Malaysia Airlines Flight 17 is a clear indication that Russian imperialism is a serious threat for global peace and security.

On August 9 in Canberra, Mr. Czolij delivered a lecture at the Center for European Studies of the Australian National University. He noted that the Russian Federation is actively challenging the resolve of the international community with its military aggression against Ukraine and Georgia, destabilization activities against former Soviet republics, numerous cyberattacks and interference in the elections of independent states.

Mr. Czolij focused on the situation in eastern Ukraine, which he said is particularly grave and requires immediate action on the part of the international community in order for Ukraine to overcome the military aggression of the Russian Federation and stop it from advancing further west. In this regard, the UWC president underscored that the international community must remain united, firm and proactive, instead of reacting to the geopolitical agenda of the Russian Federation.

He also emphasized that the European Union and NATO should offer the prospect of membership to Eastern Partnership states, including Ukraine, as was done for former Warsaw Pact states at the end of the Cold War in order to secure lasting peace, security and stability in that region. He pointed out that the ratification of the EU-Ukraine Association Agreement was an important success for the Eastern Partnership program that enhanced a number of concrete and tangible reforms in Ukraine, including those in relation to its battle with corruption.

The UWC president had the opportunity to discuss current issues with the academic coordinator of the Center for European Studies, Dr. Katarzyna Williams, and with visiting fellow Dr. Sonia Mycak.

At Monash University on August 10, Mr. Czolij highlighted UWC priorities and achievements throughout its 50-year history. He focused on the current challenges of Ukraine and the potential of the multimillion Ukrainian diaspora to promote current Ukrainian issues before the international community. Mr. Romaniw also was a panelist at this roundtable moderated by Dr. Alessandro Achilli, lecturer of Ukrainian studies at Monash University.

This roundtable, organized by Dr. Marko Pavlyshyn, director of the Mykola Zerov Center for Ukrainian Studies at Monash, was part of a series of international educational events on the occasion of the 50th anniversary of the UWC aimed at engaging various regions of the world to develop the future roadmap of the UWC.

On August 14-15, Mr. Czolij and his wife were in Singapore, another first-time visit for the UWC leader.

During the meetings with high-ranking government officials the UWC president expressed gratitude for the strong objection of Singapore to the invasion of Crimea by the Russian Federation, its support for the territorial integrity of Ukraine, the implementation of customized courses for Ukrainian officials on anti-corruption strategies and the facilitation of other training courses through the Singapore Cooperation Program.

Mr. Czolij also emphasized that the hybrid war of the Russian Federation against Ukraine includes a widespread disinformation campaign which attempts to convince the world that Ukraine is a failed state, noted the important reforms in various areas in Ukraine and concrete initiatives in combating corruption. He underlined that Ukraine is an attractive country for investment.

The UWC president called on Singapore to continue its support for the territorial integrity of Ukraine and its reform process. He also urged Singapore, during its chairmanship of the Association of Southeast Asian Nations (ASEAN) in 2018, to promote an observer status for Ukraine in the ASEAN Parliamentary Assembly. He underlined the importance of activating the Ukraine-Singapore Parliamentary Friendship Group.

“This trip was very successful and contributed to strengthening the ties of the Ukrainian World Congress with Ukrainians in Singapore,” stated Mr. Czolij.

The UWC is the international coordinating body for Ukrainian communities in the diaspora representing the interests of over 20 million Ukrainians. The UWC has a network of member organizations and ties with Ukrainians in 53 countries. Founded in 1967, the UWC was recognized in 2003 by the United Nations Economic and Social Council as a non-governmental organization with special consultative status.