Washington events focus on Ukraine and the importance of U.S. support 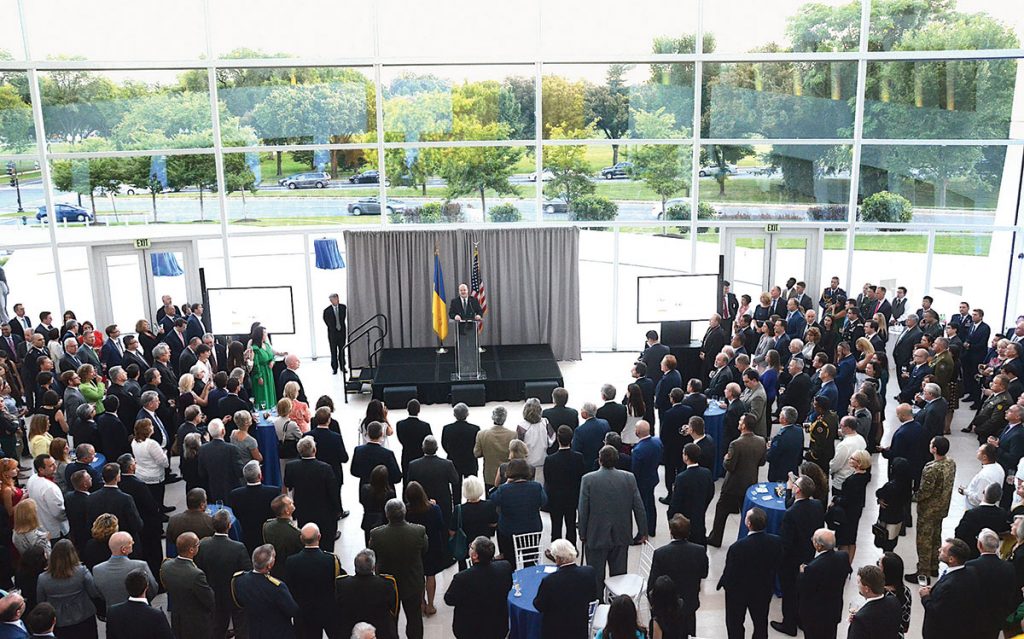 WASHINGTON – U.S. relations with and future support for Ukraine was the focus of two important gatherings in the nation’s capital held in recent days.

On the following day, a much smaller group of prominent people actively involved in the positive development of that bilateral relationship met at the U.S. Capital Visitor Center under the auspices of the Congressional Ukrainian Caucus (CUC) and the Friends of Ukraine Network of the U.S.-Ukraine Foundation (USUF).

And attendees at both gatherings were honored to hear the Ukrainian government’s assessment of Ukraine’s development, its conflict with Russia and what assistance it is seeking in the West, directly from Ukraine’s Vice Prime Minister for European and Euro-Atlantic Integration Ivanna Klympush-Tsintsadze, who was in Washington for a series of meetings with senior U.S. government officials and others.

The Ukrainian Embassy reported that the reception at the U.S. Institute of Peace was attended by an estimated 500 guests, among them U.S. government officials, members of Congress, political analysts, diplomats from more than 70 countries, and representatives of international organizations and financial institutions, U.S. businesses and the Ukrainian American community.

In their addresses at the anniversary reception, Vice Prime Minister Klympush-Tsintsadze and Ukrainian Ambassador Valeriy Chaly highlighted the growing U.S.-Ukraine strategic partnership and expressed their gratitude for the strong U.S. bipartisan support for Ukraine.

Ms. Klympush-Tsintsadze continued presenting Ukraine’s domestic and foreign policy goals and concerns the following day on Capitol Hill, during the CUC-USUF meeting on its “Priority Recommendations for U.S. Assistance” report.

Introduced at the discussion by Congressional Ukraine Caucus co-chair Rep. Nancy Kaptur (D-Ohio), the vice prime minister thanked her and her colleagues for their understanding and assistance for Ukraine, especially over the last nine months, which especially strengthened its economic, defense and energy sectors.

“We do count on the U.S. continued support for Ukraine and continued pressure on the Kremlin to comply in full with the provisions of the international law to implement the Minsk agreement in its entirety [and]cease Kremlin’s illegal attack to occupy Crimea,” she said, adding, “This unity and this leadership really is something that has to be carried on. And dependent on this leadership, we will be able to regain our territorial integrity and regain our sovereignty over the land and use all of our efforts to bring the wellbeing of our people to a better state.”

Ukraine is very grateful for the latest sanctions act passed by the U.S. Congress and signed by President Donald Trump, she said, and happy with the bipartisanship it demonstrated.

“Ukraine does have a very vibrant and very engaged civil society, but it still needs the support and engagement from all parties in the U.S., she said, concluding, “So we do count on the solidarity, expertise and unwavering support of the American people for our noble causes.”

Opening the CUC session on September 13, co-chair Rep. Andy Harris (R-Md.) set a tone that was repeated by just about every participant that followed.

“It’s time for the U.S. to step up its activity to enhance the defensive capability of Ukraine and to make certain that Russian aggression and separatist aggression on the eastern part of the border is contained,” the congressman stated.

His CUC colleague and Foreign Affairs Committee member Rep. Brian Fitzpatrick (R-Pa.) followed suit: “What was abundantly clear to me is that the Ukrainian people desperately need our help, desperately want their independence.”

The director of the U.S.-Ukraine Foundation, Nadia McConnell, in her introductory statement, quoted Ukraine’s poet laureate Taras Shevchenko, who wrote in 1857: “When will Ukraine have its Washington with his fair and just laws?” Its people have worked to this end since then, she added, and, most recently, they arose spontaneously on the Maidan “to uphold and nurture their pro-European aspirations and values.”

Ukraine’s battle for its freedom and European values continue, she added, concluding: “We must allow the people of Ukraine to defend themselves. The victims of Putin’s war grow daily. They deserve our help.”