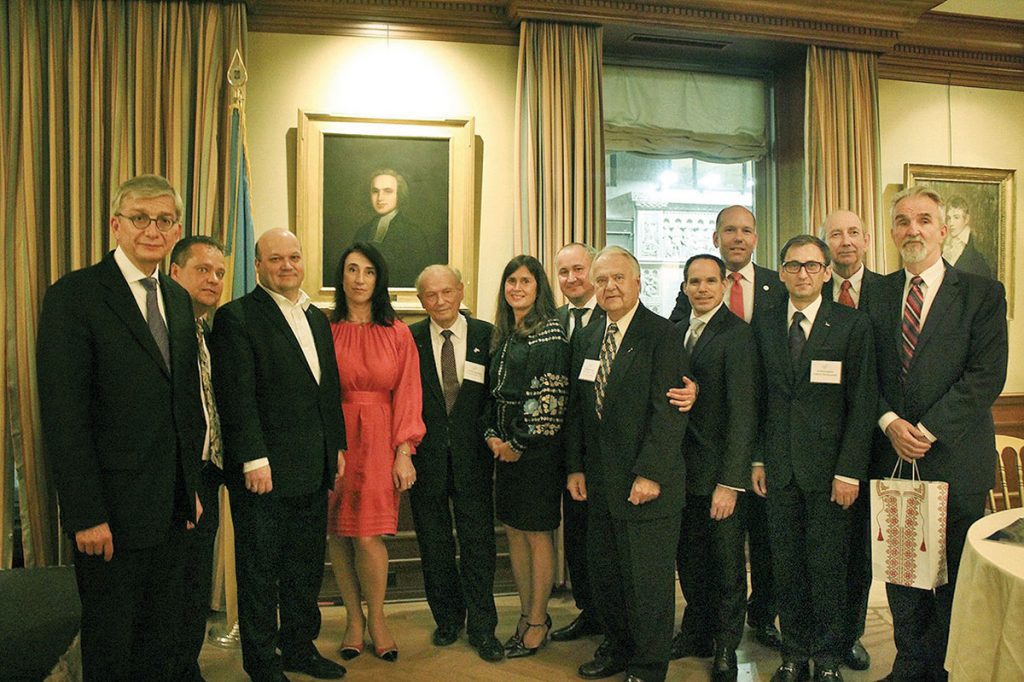 NEW YORK – Over 150 attendees gathered at the prestigious Princeton Club of New York on Saturday, September 16, to celebrate 50 years of success in uniting Ukrainian communities worldwide. Touting New York City as the “place where it all began,” the Ukrainian Congress Committee of America (UCCA) hosted an evening banquet marking the Ukrainian World Congress’ (UWC) golden jubilee following a daylong conference looking back at the history of the Ukrainian diaspora’s international coordinating body.

The evening began with a cocktail reception in the Alexander Hamilton room, where participants of the earlier conference mingled with guests just arriving for the evening banquet, including both keynote speakers: former First Lady of Ukraine Kateryna Yushchenko and the current head of the Security Service of Ukraine (SBU), Vasyl Hrytsak.

Guests also viewed a special video presentation that was projected in the room, recounting five decades of UWC leadership. (The entire series of specially prepared video presentations marking the UWC’s 50th anniversary can be found online at uwc50.org.)

Filing across the hall to the James Madison Room, guests quickly found their seats before the evening’s master of ceremonies, Michael Sawkiw, UCCA vice-president, began the program with a bilingual welcome.

Bishop-Emeritus Basil Losten of the Ukrainian Catholic Eparchy of Stamford delivered the evening’s invocation. Bishop Losten was then joined at the podium by Andrij Dobriansky, who sang the Ukrainian and American national anthems.

Eugene Czolij, president of the UWC, remarked on the significance of the UWC returning to its birthplace, where the worldwide diaspora unified in 1967 under the World Congress of Free Ukrainians to “help the Ukrainian people restore Ukraine’s independence.” Quoting his late father, Mr. Czolij reminded everyone that “every day Ukraine is an independent country, is a day to be cherished.” Although the unified efforts of Ukrainians worldwide provided Mr. Czolij with numerous accomplishments to hail at this occasion, he also took the time to recognize that the UWC’s celebrations were “overshadowed by Russia’s relentless aggression against Ukraine.”

Valeriy Chaliy, ambassador of Ukraine to the U.S., delivered the evening’s final greeting, on behalf of independent Ukraine.

Mr. Sawkiw introduced the first of the evening’s two special guests, Ms. Yushchenko. The former first lady of Ukraine spoke on a variety of topics, including her personal connection to both the United States and Ukraine, contemporary developments in Ukraine and the great potential Ukraine possesses, especially given its talented youth. Her keynote address succinctly summarized why Ukraine matters to the global community.

Gen. Hrytsak delivered the second keynote address of the evening. Speaking with an interpreter, Gen. Hrytsak focused his presentation on personal stories of loss, given his intimate knowledge of members of the Security Service of Ukraine (SBU) and their families. At one point he held up his wrist to display a handwoven bracelet with stars punched through for every member of the SBU to have lost a life since 2014 to Russia’s invasion of Ukraine. In his emotional remarks, Gen. Hrytsak thanked the Ukrainian diaspora for its continued support and love of Ukraine, and urged the UWC to continue its important work.

Unexpectedly, Gen. Hrytsak closed his remarks by presenting a special series of awards to members of the UWC community who have demonstrated extraordinary support to the mission of the SBU. Awards were presented to Andriy Futey, Borys Potapenko, Eugene Czolij, Paul Grod and Walter Zaryckyj.

Former UWC President Askold Lozynskyj was asked to address the room with the final remarks of the evening. Mr. Lozynskyj took the opportunity to press the Ukrainian government officials in attendance to work towards bringing to reality the vision of Ukraine professed in 1967 by the founders of the World Congress of Free Ukrainians.

The evening was closed with a benediction delivered by Archbishop Daniel of the Ukrainian Orthodox Church of the U.S.A. Following tradition, Archbishop Daniel finished by intoning a blessing of “Mnohaya Lita” (Many Years) for all to sing.

The U.S. Steering Committee for the entire day’s events was a collaboration between the Ukrainian Congress Committee of America and the Center for U.S.-Ukrainian Relations, including event coordinators Mr. Dobriansky, Mykola Hryckowian and Lesia Orach, program coordinator Dr. Zaryckyj and executive coordinator Ms. Olexy. The worldwide series of 50th anniversary commemorations, which continue in October in Brussels and Toronto are the initiative of the UWC’s 50th Anniversary Committee, headed by Iryna Mycak.