Club Suzie-Q meets at Soyuzivka for annual excursions and presentations 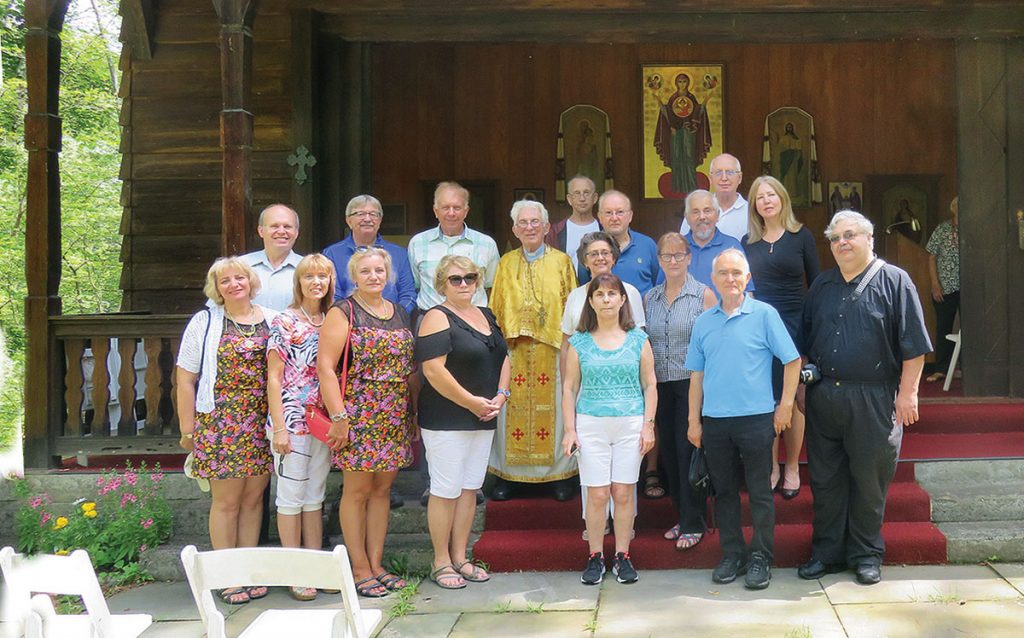 Andrew Hrechak
Club Suzie-Q members and Father George Bazylevsky at the Soyuzivka chapel after a service in memory of the late Taras Dobusz.

KERHONKSON, N.Y. – Another season has passed, along with another enjoyable Club Suzie-Q event that took place the week of August 12. Twenty-three members met at Soyuzivka, renewed friendships and participated in numerous activities.

Club Suzie-Q is a group of Ukrainian American professionals who have been meeting annually since 1984. Plans for the week traditionally include annual activities such as an initial hug-in and reception, a “zabava” (dance) on Saturday evening, a visit to Mohonk Mountain House on Monday and a hike at Lake Minnewaska during the week.

This year, members gathered for a service for the late Taras Dobusz, conducted by the Rev. George Bazylevsky at the chapel located on the grounds of Soyuzivka. Mr. Dobusz, an architect, was a long-time Club Suzie-Q member. He is remembered especially because at the August 2016 Club Suzie-Q gathering he presented a narrated slide show of the six Ukrainian churches that he designed in the tri-state area, along with an explanation of the historical development of various church plan forms .

A separate prayer was offered by the Rev. Dr. Ivan Kaszczak of Holy Trinity Ukrainian Catholic Church for both the late Sonia Semanyszyn and Mr. Dobusz. Ms. Semanyszyn, a longtime employee at Soyuzivka, was involved in planning the annual August meetings for many years; her expertise was invaluable and she was consistently available to advise and assist. Club Suzie-Q members set time aside to reminisce about Mr. Dobusz and Ms. Semanyszyn.

There was also a discussion with Father Kaszczak of a spiritual nature, which culminated in his speaking about being the best that we can be.

The two featured Club Suzie-Q excursions this year were the Rhinebeck Air Show and the West Point Military Academy tour.

The Rhinebeck Air Show in Redhook, N.Y., organized by Club Suzie-Q member Yuri Mykolayevych, was a two-hour dynamic, narrated show of various types of colorful World War I bi-planes, taking off and performing stunts in the sky.

The excursion to West Point Military Academy in West Point, N.Y., was organized by Club Suzie-Q member Richard Vasyl Strayves. This included a narrated West Point bus tour as the grounds and various buildings were explained, and the life of cadets at West Point was described. The tour included walking through one of the chapels, as well as a walk on the banks of the Hudson River and viewing monuments and old cannons. Members also toured the museum at West Point.

Mr. Mykolayevych treated the group to a scenic drive on the way to and from West Point. Members viewed the Shawangunk’s Millbrook Mountain escarpment, the Moodna Railroad viaduct and the Bear Mountain Bridge, and got a bird’s eye view of the Hudson River from Storm King Highway.

Club Suzie-Q’s annual evening presentations are done by members and consist of the presenters’ narrated slide shows. This year there were four presentations.

Yuri Mykolayevych presented his and Lyuda Mykolayevych’s 2016 trip to Italy. Mr. Mykolayevych described geographical features of Italy and its perimeters, as well as points of interest in Milan, Rome, Florence, Lake Como/the Alps and Venice. The presentation ended with a description of linguistic similarities between the Italian and Ukrainian languages.

Daria Dykyj offered two slide presentations, the first showing highlights of a 2016 ecology tour to Costa Rica with Club Suzie-Q member Slavka Jarema. During the tour, Dr. Dykyj and Ms. Jarema experienced different levels of tropical forest along with typical fauna. The second presentation highlighted Dr. Dykyj’s May 2017 experience of archaeological discovery while on a dig of a 1,000-year-old Mayan settlement in the deep forest of Belize. She presented interesting facts about the Mayans, the finds and the conditions of excavation. For Dr. Dykyj the dig was a welcome return to her experience and study of archaeology as a graduate student years ago.

The fourth Club Suzie-Q presentation was Handzia Mycak’s slide show about her and George Mycak’s trip to the Canadian Rockies. The show included spectacular views and sites unique to this mountainous area.

During the annual Ukrainian sharing night at Club Suzie-Q, members exchanged information about the various charities that were established to help Ukrainian soldiers and their families.

Throughout the week, everyone enjoyed catching up with each other and engaging in discussions during breakfast in the Main House dining room, as well as during dinner either at Soyuzivka or in area restaurants.

Roma Marie Cehelsky Nightengale of Rochester, N.Y., and Dr. Andrew Hrechak of Irvington, N.J., have planned and managed the last five years of Club Suzie-Q weeks at Soyuzivka. Club Suzie-Q is independent of Soyuzivka and has met in numerous other locations over the years in addition to the annual gatherings at Soyuzivka for the last 34 years.

Club Suzie-Q welcomes new Ukrainian American professional members and is open to singles or married couples. For further information and to be added to the e-mail list, readers may write to Ms. Nightengale at clubsuzieq@gmail.com.