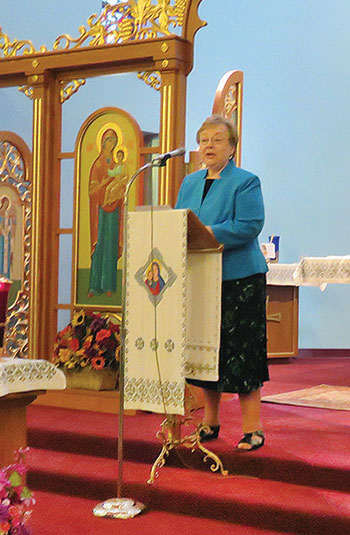 Ukrainian Weekly Editor | The Ukrainian Weekly | Subscription
Ann Pettigrew, president of the Hillside Historical Society, provides an overview of Phil Rizzuto’s achievements and her personal experiences with the baseball great and his wife, Cora.

HILLSIDE, N.J. – New York Yankees legend and 57-year resident of Hillside, N.J., Phil Rizzuto (a.k.a. The Scooter), would have been 100 years old on September 25. Sixty years ago, in 1957, Rizzuto was one of the early benefactors of the building fund of Immaculate Conception Ukrainian Catholic Church in Hillside – despite having no ties to the parish other than being a resident of the town.

To honor Rizzuto and to show appreciation of his past generosity, on Sunday, September 24, the Hillside parish offered the liturgy intentions for him.

Immediately after the liturgy, Ann Pettigrew, president of the Hillside Historical Society, gave a captivating speech about Rizzuto’s storied life and her own personal accounts of having known the baseball great and his wife, Cora, very well. She also brought several memorabilia to church from the Phil Rizzuto Exhibit collection housed in the Woodruff House of the Hillside Historical Society, of which Rizzuto was an active and dedicated member.

Some of the outstanding career achievements of Rizzuto that Ms. Pettigrew mentioned: named the American League’s Most Valued Player (MVP) in 1950; played in nine World Series over his 13-year career with the Yankees, winning seven of those; considered the best Yankees shortstop in history prior to Derek Jeter; elected to the National Baseball Hall of Fame in Cooperstown, N.Y., in 1994; had his No. 10 retired in Monument Park of Yankee Stadium in 1985; was radio and television announcer for the Yankees for 40 years.

The guest speaker described Rizzuto personally as “a very humble, sweet, unassuming, endearing gentleman who also had a great sense of humor. He was able to take a joke, as well.” She also mentioned that he was “very generous – mostly quietly” including raising over $2 million through his celebrity golf tournament and the Rizzuto family for St. Joseph’s School for the Blind in Jersey City, N.J., a Catholic institution founded by the Sisters of St. Joseph of Peace.

The parish was also blessed to have received a personal letter from Larry Berra (Yogi Berra’s son) written specifically for the September 24 gathering at the church. In his letter, which was read by parishioner Joe Shatynski, Mr. Berra shared a very personal side of the strong friendship that Yogi Berra and Rizzuto had.

“They were both good men who cared about people and showed over and over again that physical stature is no indication of the size of a person’s heart. They are both remembered as much for their goodness off the field as they are for their greatness on it, and for that reason, Phil’s legacy, like my Dad’s, ain’t over yet,” the letter read.

Just as the organist played “Ave Maria” in Yankee Stadium after Rizzuto died, one of the young parishioners of Immaculate Conception performed a beautiful rendition on the flute in honor of Rizzuto.

Parishioner Michael Szpyhulsky closed the celebration by thanking Rizzuto for his generosity and, more importantly, for bringing parishioners and non-parishioners together in church 60 years after his gift to the parish.