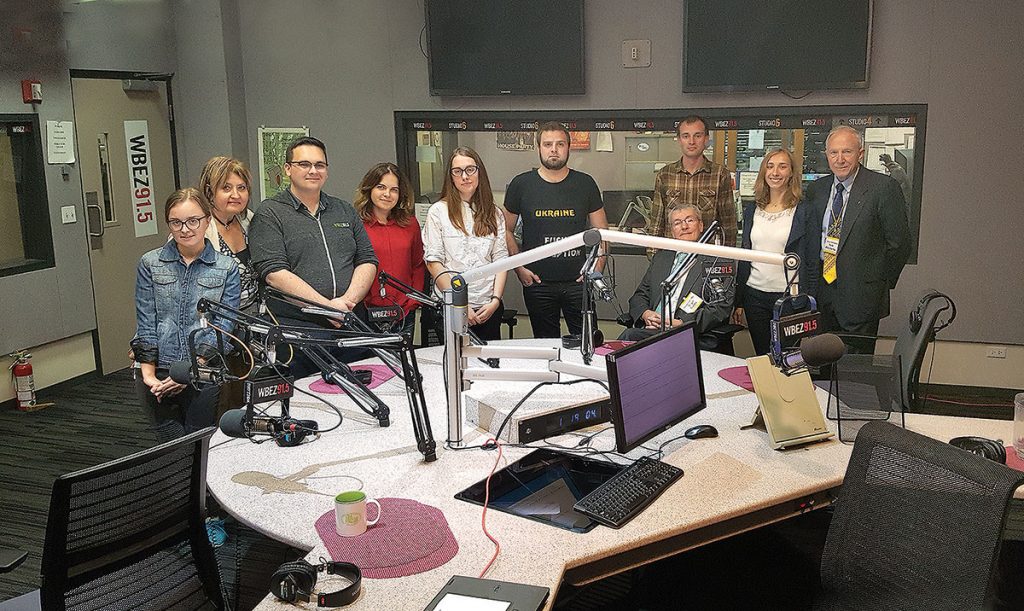 CHICAGO – A group of journalists from Kyiv took part on September 8-16 in a professional exchange program sponsored by the Open World Leadership Center, an international exchange agency of the U.S. legislative branch with administration provided by the U.S.- Ukraine Foundation.

The program was organized and hosted by the Kyiv Committee of Chicago Sister Cities International and the Ukrainian Genocide Famine Foundation.

Prior to their arrival in Chicago, delegates completed an orientation in Washington on Capitol Hill.

In Chicago, delegates collaborated on best practices for media literacy and countering false information with seasoned journalists, media professionals and experts involved in the sphere of communications and government to see how they expose false reporting/information and search for objectivity. They discussed thoughts on how society can be better prepared to think critically, check facts and respond to disinformation in effective ways.

During an intense week of activities, the group visited the offices of Sen. Dick Durbin (D-Ill.), Chicago Mayor Rahm Emanuel’s press office, Bloomberg, Fox, NBC and Reuters news outlets and the “Worldview” program of WBEZ on National Public Radio. The delegation also met journalists at the Chicago Tribune and Columbia College of Communications.

To become acquainted with governance and policy, they visited the Better Government Association and the Illinois Policy Institute. Each morning the group also had an opportunity to speak on myriad issues to the Ukrainian diaspora on Chicago’s Ukrainian Independent Radio program.

Rep. Mike Quigley (D-Ill.), who actively supports Ukraine and the battle against fake news, spoke with the delegation at the Ukrainian Institute of Modern Art. This included a viewing of Daria Marchenko and Daniel Green’s exhibit “The Elements of War.”

Another meeting of note was held with Walter Dudycz, former state senator of Illinois. Mr. Dudycz shared his experiences of being a target of falsified news reporting and how this adversely impacted the good he tried to accomplish.

The highlight of the week was a public lecture at DePaul University’s Center for Journalism Integrity and Excellence titled “Journalistic Veracity: A Lesson from History,” featuring Nigel Colley, great-nephew and biographer of murdered Welsh journalist Gareth Jones. Jones was the only Western journalist to break and cover the story of the Famine-Genocide against Ukrainians in 1932-1933. The journalists had an opportunity to discuss the issue of false information and media literacy today. Three years after an invasion by Russia, Ukraine is the biggest example where fake news and war fuel one another. Programs like Ukraine’s Stopfake.org show how important fact checking is in the face of war.

Thanks are due to WBEZ Program Producer Julian Hayda for organizing this event, Mr. Colley for traveling to the U.S. to share this story and the president of the Ukrainian Genocide Famine Foundation, Nicholas Kotcherha, for helping to make it possible.