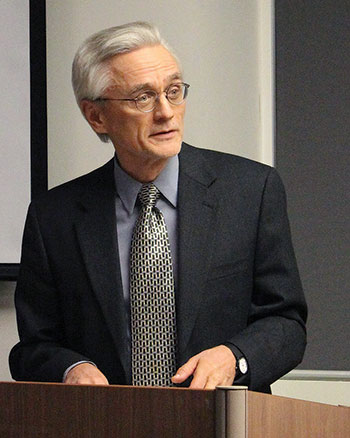 KYIV – Rutgers University-Newark political science professor Alexander Motyl is known for swimming against the tide when it comes to speaking about post-Maidan Ukraine. All is not lost and not everything is “doom and gloom,” his writings and observations often say. Unlike many of his Ukrainian and Western contemporaries, Prof. Motyl insists that Ukraine is historically in the best position since the 17th century to forge a stronger state entity, one that can consolidate democracy in five years, to become economically and socially prosperous, and Westernize in the coming years.

On October 13, the professor, novelist and poet spoke with The Ukrainian Weekly via an online messenger service, sharing his views on Ukraine’s new law on education, the situation in the Donbas and Ukraine’s options in the ongoing war being waged by Russia.

After earning his Ph.D. at Columbia University in 1984, Prof. Motyl embarked on an academic and teaching career. The Ukrainian American has earned a reputation for having expertise on “Ukraine, Russia and the USSR,” according to the World Affairs Journal. He is, together with Bohdan Klid, the editor of “The Holodomor Reader: A Sourcebook on the Famine of 1932-1933 in Ukraine.” An avid fiction writer and poet as well, Prof. Motyl has authored several novels, perhaps the best known of which is “The Jew Who Was Ukrainian” (2011). His most recent book is “Ukraine vs. Russia: Revolution, Democracy, and War” (2017).

The following interview was edited and condensed for clarity and space. It is being published in two parts, with the conclusion to appear next week.

Starting with the education law and the reaction to it by Ukraine’s neighbors. Since you’re an educator in a sense, what’s behind the complaints by Hungary and Romania? I realize that Hungary has national elections next year… what’s this all about?

Well, in the case of Hungary, it’s purely straightforward. Yes, they’ll have elections, but it’s the Viktor Orban government. And Poland has also been hysterical in its reactions. Let’s call them somewhat anti-democratic and somewhat chauvinistic, to be kind. And they simply overreacted. Imagine if right-wing Svoboda party leader Oleh Tyahnybok, heaven forbid, be prime minister of Ukraine. He would be probably responding in a similar fashion to whatever the Poles or Hungarians do. I explain it in those terms.

The bottom line is: Are they right or wrong? From what I’ve seen… Ukraine has adopted a very even-handed law that is similar to the kinds of educational practice in just about any other European or North American country. There’s nothing discriminatory about insisting that every kid in the country speak the language of the country. The law actually encourages the learning of minority languages. This law is pretty much business as usual.

Regionalism and separate identities, that’s again business as usual… which country doesn’t have them? There’s Texas… every country has regions… like California, like Bavaria, like Catalonia, none of this is terribly unusual. Sometimes these regions want more autonomy, sometimes they don’t, and sometimes they want independence.

That’s not the issue for me. The issue for me is Ukraine’s challenges, and the first one is surviving the war with Russia. Challenge number two is continuing with serious reforms. If Ukraine manages to do the first, it survives. If the second, it survives and is prosperous and democratic. I want Ukraine to thrive.

The question is: Is Ukraine more likely to survive with the Donbas or without? It’s far better off without the occupied territories. It’s far more capable of integrating with the West, of embarking on reform, of putting up a solid front against Russia. In that sense, it’s an absolute blessing in disguise.

I’m not saying Ukraine should give away the occupied regions. I’m saying that Ukraine should realize that it has a wonderful opportunity to become strong and prosperous precisely because the one region that has always been the main obstacle to strength and prosperity and Westernization has been withdrawn from Ukraine and the political process by Russian President Vladimir Putin.

In one fell swoop, Putin removed 3 to 4 million people who have traditionally voted in elections for the worst possible parties. The worst political elements, the worst oligarchs, and of course the strongest criminal elements, they were all based in the Donbas. You remove them and their pro-Sovietism, their pro-Russianism and anti-Ukrainianism, and suddenly Ukraine becomes a viable country.

Otherwise, we would’ve had the same Ukraine that we had after the Orange Revolution of 2004.

In Foreign Policy you wrote that the semi-frozen conflict is the best option. Every day, one cow dies, one soldier gets killed or wounded. On the ground living here, I see the war spreading beyond the Donbas. There are abductions, cyberattacks, and four Ukrainian arms depots have exploded. It’s an everyday toll on society. Now we’re seeing post-traumatic stress and suicides among the veterans. How much can Ukraine endure while keeping it as a semi-frozen conflict?

The question has to be the following: What are Ukraine’s options? Can Ukraine win back the Donbas militarily? I don’t see that as an option. Russia has an army of a million soldiers. They have nuclear weapons. So the last thing you want to do is start a war with Russia.

Can Ukraine get the Donbas back on Putin’s terms? It can. Give them full rights, reintegrate them in society. That means essentially reform would end and Ukraine would slowly but surely drift back to Russia’s sphere of influence.

Both options are about self-destruction. What’s left?

The only one is the reality of the present moment. It is deeply unsatisfying. People want resolution, as do I. I just don’t see what the alternatives are. A frozen conflict is to Ukraine’s advantage. Minimally it keeps out these people and keeps Russia at bay.

By the way, the stalemate in the Donbas is actually a military victory for Ukraine. Kyiv stopped Russia using its own forces. How many countries have done that? Now, you have to make the best of it. Hence, Ukrainian policy makers understand this. They’ve been arguing for the introduction of U.N. peacekeepers. To think that Russia would seriously accept U.N. peacekeepers in the entire Donbas as well as on the border with Russia, that’s obviously a non-starter.

As to what happens five, 10 or 20 years from now, let’s see. One of the things that strikes me of people who criticize the options I propose is that they have no alternatives. There’s no military alternative. Count your good fortune because this won’t last permanently. You’re in a position to leave Russia’s sphere of influence and finally move Ukraine into the West.

Two laws were passed last week that moved ahead on the Donbas, one of which, in its final reading, catches up legislatively to the reality on the ground there. What is your assessment of them?

This is essentially the Ukrainian interpretation of Minsk [the peace deal of 2014 and 2015 designed to end the war in the Donbas]. Get all the forces and weapons out. Ukraine re-takes control. Then we have free and fair elections, and whoever happens to win gets to have something resembling autonomy… so what else is new?

The issue is whether Russia will ever agree to it; will the Luhansk, Donetsk militants agree to it. The answer is no, no, no. I understand that countries need laws and there needs to be a legal framework. I would prefer personally if Ukraine devoted half as much energy as it has to these laws to doing big privatization of state-owned assets, work to privatize agricultural land.

I see that people since the Maidan Revolution, for the most part, they’re not feeling the transformative effects of reforms that have been passed so far. There are still low wages, inflation is still hovering yearly at 15 percent, and the average monthly salary is at about $200 per month. Utility prices have gone up. There’s a growing consensus that President Petro Poroshenko is doing the bare minimum. We see that Ukraine finally sold a Eurobond whose coupon rate is 7.5 percent, which is about twice the International Monetary Fund interest rate. So, it could live without IMF money for the time being. Where do you see this all going, you visit Ukraine often. Are people feeling the positive effects of reforms?

No, and you wouldn’t expect them to. Imagine that Ukraine did everything right. Sort of follow the IMF playbook: raise prices on energy, introduce reforms in heating, and introduce market reforms with regard to banking and the agricultural land privatization. The immediate effect for a significant portion of the population would be awful.

People say they want more reforms, as do I, and that they should be faster. But to think they will suddenly transform living standards from what they are today – no!

Ukraine has been living in a distorted, deformed, half-market system for the last 25 years and you want to get everything in sync.

Point one is: If the reforms were faster, then the pain would be even greater. Everybody knows this. What happens very often in countries who do follow the IMF playbook is that the legitimacy of the government declines, populist forces rise, left-wingers and rights-wingers with them.

Point two: Are there reforms taking place? Again, I don’t understand people who say that they aren’t or are imitative. If you look at the semi-objective indices like from Freedom House or assessments of people in the know, you see significant changes. The changes that have been taking place are largely of the institutional or structural nature. They don’t lead to increased wages immediately, which the populists want but can’t deliver without ruining other things in the way.

From your vantage point, do you think that President Petro Poroshenko, Prime Minister Volodymyr Groysman and others in government are doing a good enough job of explaining why these changes are needed to the public?

That’s one of the key problems. Poroshenko and Groysman, especially Poroshenko, he should be doing town hall meetings, he should be turning up his sleeves and doing photo opportunities some place, he should be meeting with people. And he should do this on a regular basis. Do those regular call-in five-hour marathon shows that Putin does. Bring in people, have them ask tough questions and give them straight answers. That could make a big difference. You don’t want to be the guy who is ensconced on Bankova Street with no connection with the people. It’s not enough to give an occasional speech on Independence Day. It has to be more of this reaching out to the population, presumably with good will – you’re not doing this as a propaganda stunt.

I’m not enamored with Poroshenko or Groysman, but you have to ask compared to what? You have to compare these guys to the current alternative in Ukraine, whether it is Kyiv Mayor Vitali Klitschko, Tyahnybok, ex-Prime Minister Yulia Tymoshenko, or any of these other guys.

Frankly by that standard, this is a pretty good bunch. If you compare this bunch with the group that preceded it: Viktor Yanukovych, ex-presidents Viktor Yushchenko, Leonid Kravchuk, Leonid Kuchma. Compare them to existing leaders like Orban and [Jaroslaw] Kaczynski. Pretty good. How does he compare to U.S. President Donald Trump? Really good. You have to look at these things realistically.