Ukrainian art on exhibit at University of North Carolina 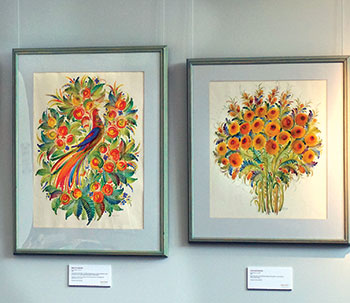 Maryna Kapustina
Petrykivka paintings on view as part of the exhibit at the University of North Carolina at Chapel Hill, N.C.

CHAPEL HILL, N.C. – The exhibit “Image of Ukraine: Exploring Ukrainian Culture through Embroidery and Painting” was officially inaugurated at the University of North Carolina at Chapel Hill (UNC) on September 14.

The exhibit was organized by the Ukrainian Association of North Carolina and the Center for Slavic, Eurasian and Eastern European Studies (CSEEES) at UNC, with support provided by UNC’s Center for Global Initiatives, Department of American Studies and Department of Germanic and Slavic Languages and Literatures. It is hosted by UNC Global and is on display until December 8.

The CSEEES has been very interested in introducing Ukrainian studies at UNC for some time, and this resulted in a very productive collaboration with the Ukrainian Association of North America. Five years ago the association organized a scholarly conference on the Holodomor, with the active participation of faculty, students, experts and local universities; two years later, it hosted an exhibit of Ukrainian Easter eggs. The “Image of Ukraine” exhibit is the latest example of this fruitful collaboration.

The idea for the exhibit was proposed by the Ukrainian Association and, after approval by the university, an organizing committee of association members, chaired by Donna Goldstein, started its planning and implementation. This was a truly collaborative effort. Local Petrykivka artist Olena Zintchouk, a member of the association, contributed her paintings and, with her daughter Lesia, curated the elements for the embroidery exhibit. The Ukrainian American Club of Southwest Florida loaned framed embroidery from its permanent collection. Ladies from the Ss. Volodymyr and Olha Ukrainian Catholic Church in Garner, N.C., prepared traditional Ukrainian food for the reception. Ingrid Smith, events and exhibition’s manager at the Global Center, and Adnan Džumhur, associate director of the Slavic Center, spearheaded the effort on the university side.

“We always look for opportunities to work with the local community to create cultural programming and globally relevant exhibits. Collaborating with the Ukrainian Association of North Carolina became a wonderful opportunity to bring Ukrainian culture to campus,” said Ms. Smith.

According to Mr. Džumhur, “[This] is a unique exhibit that really illustrates a serious dedication from the local Ukrainian community and introducing their culture in a way that’s meaningful to them… A lot of what you’re seeing is sincere community effort.”

The inauguration was opened with remarks by Ron Strauss, chief international officer and executive vice-provost at UNC. It was attended by Andriy Futey, president of the Ukrainian Congress Committee of  America. The ambassador of Ukraine to the U.S., Valeriy Chaly, sent his greetings.

Natalie Kononenko, professor and Kule Chair in Ukrainian Ethnography in the Department of Modern Languages and Cultural Studies at the University of Alberta in Canada gave the keynote address.

A list of cultural activities is planned for the duration of the exhibit, and the Slavic Center is sponsoring other activities to increase the presence of Ukraine on the UNC campus.

Donna Goldstein, a member of the Ukrainian Association of North Carolina, played a key role in organizing the exhibit and associated activities.