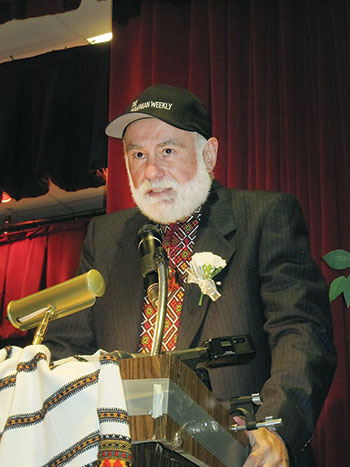 Roma Hadzewycz
Ihor Stelmach, sports writer for The Ukrainian Weekly since the 1970s, was among the 2017 inductees. He also served as the event’s master of ceremonies.

WHIPPANY, N.J. – The Ukrainian Sports Museum held its second annual Ukrainian Hall of Fame induction ceremony at the Ukrainian American Cultural Center of New Jersey (UACCNJ) in Whippany on Saturday, September 16. Fifty individuals and three teams were inducted into the hall’s class of 2017. Categories for induction were Olympic athletes, professionals, amateurs and “builders.”

Returning master of ceremonies Ihor Stelmach, long-time sports correspondent for The Ukrainian Weekly, himself a 2017 Hall of Fame inductee, led the evening’s program. His bilingual, lyrical opening remarks about sports flowed into trivial facts about select Hall of Famers and he again donned some 18 different sports caps, representing specific themes or an inducted athlete’s team.

Myron Bytz, president of the board of directors of the Ukrainian Sports Museum, officially greeted the assembled guests and spoke of the museum’s achievements and growth over the past year. He introduced his board members/partners: Christine Bytz (his wife), Roman Bulawski, Teodor Bodnar, Bohdan Porytko and Tania Soltys, acknowledging their grand efforts in the organization’s success.

A major highlight of the evening was the presence of Eugene Melnyk, Ukrainian owner of the National Hockey League’s Ottawa Senators, who flew in on his private jet from his home in Barbados. Mr. Melnyk, an inductee in the builders category, was one of the evening’s two keynote speakers. His inspirational message could be characterized by one simple word: passion.

Mr. Melnyk explained how his love for horses was passed down to him from a dear uncle, eventually leading to owning several racehorses and his induction into the Canadian Horse Racing Hall of Fame. His passion for hockey, a sport he grew up playing, manifested itself later in life, when in 2002 he had the opportunity to purchase the Ottawa Senators hockey club. He did so with the firm understanding the club would remain in Ottawa and never relocate.

He then passionately expressed his patriotism by spearheading medical relief efforts to war-torn eastern Ukraine and proposed a boycott of sponsors of the 2018 FIFA World Cup in Russia to protest its involvement in the war in eastern Ukraine.

A second highlight was the presence of Vasiliy Karlenko from Kyiv, officially representing President Serhiy Bubka of the National Olympic Committee of Ukraine. Mr. Karlenko is the head of the Athletics Department and Cycling of the Ukrainian Institute of Physical Education and Sports and head coach of Ukraine’s powerful biathlon team. He has been tasked with the responsibility of strengthening relations between the diaspora and Ukraine.

Mr. Karlenko gave a short address extolling the virtues and importance of the Ukrainian Sports Museum as an international institution, fully supported by Ukraine’s National Olympic Committee. Mr. Karlenko arrived with many items of memorabilia and sports artifacts from Ukraine which were donated to the Ukrainian Sports Museum and awarded to members of the museum’s board of directors and select honored guests. These included flags, medals, jackets, hats, autographed items and certificates of merit.

Among the 2017 inductees present at the event were ex-Philadelphia Flyers center and two-time Stanley Cup champion Orest Kindrachuk and heavyweight boxer Chuck Wepner (his mother was Dolores Hrynko). Both pro athletes reiterated great pride in their Ukrainian heritage and expressed sincere gratitude for being recognized by the Ukrainian Hall of Fame.

Mr. Bytz announced that the Ukrainian Sports Museum and Hall of Fame would soon be relocating from the UACCNJ in Whippany to the Tryzub sports complex in Horsham, Pa., having outgrown its present premises. The move will allow the museum to be more cost effective, provide necessary space for the growing institution and place it in the middle of a strong Ukrainian sports environment.

EDITOR’S NOTE: To see the list of 2017 inductees into the Ukrainian Sports Hall of Fame, as well as the inaugural class from 2016, go to http://www.ukrsportsmuseumhof.org/.