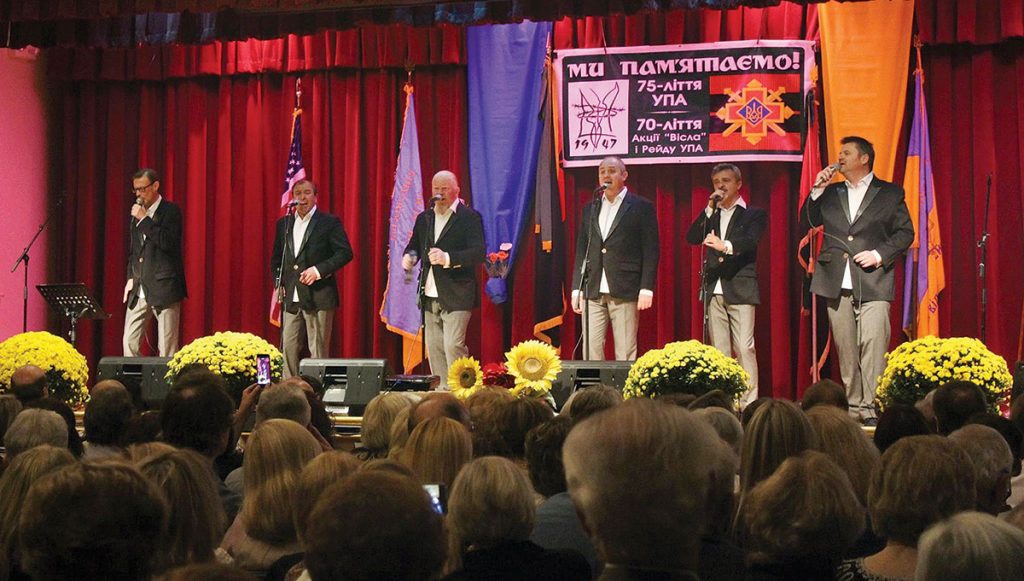 WHIPPANY, N.J. –  A commemorative concert held here at the Ukrainian American Cultural Center of New Jersey on Saturday, October 14, marked three historic anniversaries that are being observed by Ukrainians around world.

Headlining the sold-out concert were well-known performers from Ukraine, the six-member a cappella group Pikkardiyska Tertsiya and bard Taras Chubay, a singer, musician and songwriter, as well as the Iskra Ukrainian Dance Ensemble of Whippany, N.J.

The concert was opened with the Ukrainian and American national anthems performed by the gifted young singer Anya Kosachevich. The color guard was composed of members of Plast Ukrainian Scouting Organization and the Ukrainian American Youth Association (UAYA). The Rev. Stepan Bilyk, pastor of St. John the Baptist Ukrainian Catholic Church in Whippany, delivered the invocation.

The audience was addressed by Michael Sawkiw, director of the Washington-based Ukrainian National Information Service, and Ukraine’s ambassador to the United States, Valeriy Chaly, who was in attendance with his wife, Liudmyla Mazuka, and their children.

Also appearing in the concert program were members of the Stamford, Conn., branch of the UAYA, who presented a short play and performed several songs, including the mournful “Plyve Kacha.”

During the program, Ambassador Chaly presented certificates of appreciation to Mmes. Brozyna and Duplak for organizing the commemorative event and to Ukrainian National Women’s League of America President Marianna Zajac for many years of work for the good of the Ukrainian community and Ukraine.

The significance of the commemorative concert’s October 14 date is that it is the Day of the Holy Protectress, which is historically identified as the date when the UPA was officially established.