“Fall for Art” kicks off new season at The Ukrainian Museum 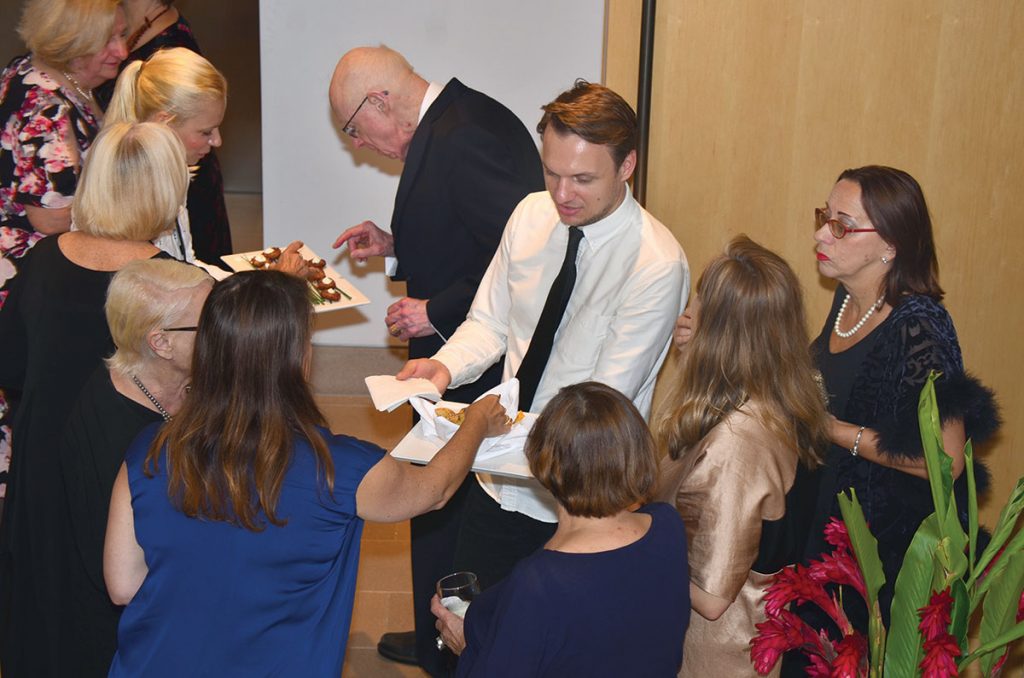 Yurij Leshko, ©The Ukrainian Museum
During the cocktail hour.

NEW YORK – The Ukrainian Museum’s benefit event “Fall for Art: Soirée & Art Auction” on September 30 was a resounding success, as more than 150 friends and supporters of the museum attended the event and many of the guests participated in the lively auction of fine artwork.

Board member Alla Leshko worked tirelessly on organizing this special event with the invaluable support of her husband, Prof. Jaroslaw Leshko, former president of the board of trustees, and Daria Merhle. In addition to obtaining donations of artwork for the auction, they handled many of the complex details involved in organizing such an elegant affair. Ms. Leshko made it clear, however, that “it couldn’t have been done without the steadfast assistance of other board members and museum staff, and the numerous volunteers who contributed in so many ways.”

Ms. Leshko underscored the major contribution made by the Veselka Restaurant, owned and operated by Tom Birchard and Jason Birchard, which donated the delicious hors d’oeuvres and wines served at the event. The guests showered praise on the savory offerings prepared by chef Olesia Lew and her crew – all expertly served by Veselka wait staff under the direction of the restaurant’s general manager, Irena Piasecka.

The evening began in the museum’s main galleries, where the artworks to be auctioned graced the walls, giving prospective bidders the opportunity for an intimate look at each piece. Chryzanta Hentisz, president of the board of trustees, welcomed the guests and thanked them for their support of the museum, stressing that the museum is able to fulfill its mission because of that support.

During the cocktail hour, guests were entertained by Adriana Helbig, a talented pianist, associate professor at the University of Pittsburgh and director of the Carpathian Music Ensemble.

The guests were later ushered into the “auction gallery” for the main event, picking up their numbered paddles and auction catalogues on the way.

All 36 pieces on the block were donated to the museum, many by the artists themselves and others from private collections.

Museum trustee Lida Chaplynsky, a L’Oreal executive, and Dr. Taras Odulak, who is a practicing chiropractor when not volunteering for the museum, were superb auctioneers, garnering nearly $40,000 for the museum with the help of the enthusiastic bidders. Several of the artworks, the Archipenko lithograph, the Borzemsky and Hnizdovsky woodcuts, and the two Moroz oils, engendered considerable excitement among competing bidders, the final bids calling out cheers of congratulations and applause from the audience.

The Viennese table at the end of the evening was the pièce de résistance, with delectable tortes baked and donated by master bakers, including several donated by Balthazar’s pastry chef, Mark Tasker.

Proceeds for the event were generated not only by the auction, but also by the generous donations of the event sponsors, ticket sales and contributions by some who were unable to attend the event. Veselka was a major sponsor of the cocktail hour, and generous sponsorships were also provided by Luba Firchuk, Lydia Hajduczok, Prof. Renata Holod and Prof. Oleh Tretiak, Prof. Jaroslaw and Alla Leshko, Myron and Christine Melnyk, and Oleh and Christina Samilenko.

“It was an exciting and extremely satisfying evening,” said Ms. Shust. “It is especially gratifying to see such strong support for our museum by the Ukrainian community and beyond.”