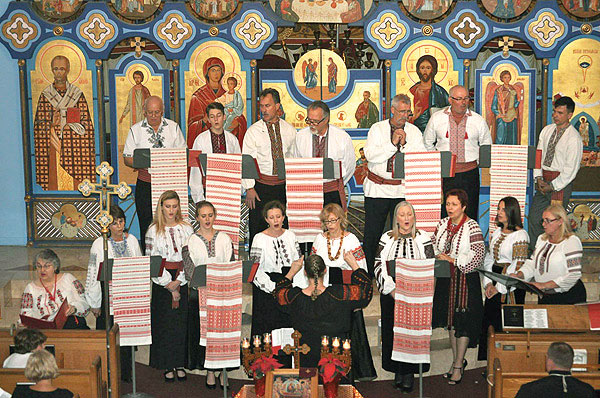 Zorianna Romankiv
The choir of the Assumption of the Blessed Virgin Mary Ukrainian Catholic Church during a concert in 2016.

MIAMI – The highlight of the Christmas season for many families in Florida and out-of-state visitors is the annual Christmas pageant in Disney World in Orlando. The park turns into a fantasy world of Christmas experiences through colorful costuming, lighting extravaganzas and musical programs. The Candlelight Processional is the highlight of the festivities: a parade of Disney characters, a choir of 300-plus singing the most beloved American carols and spectacular fireworks afterwards.

Miami’s choir of the Assumption of the Blessed Virgin Mary Ukrainian Catholic Church was invited by Disneyworld to try out for the Candlelight Processional. After submitting a video of several carols to the auditioning committee, choir director Donna Maksymowich-Waskiewicz announced several weeks later that the choir was selected to be part of the Disney Choir and perform in the concert. The choir was pleased to accept the invitation since there was competition from other choirs.

A celebrity narrator will lead the choral concert, intertwined with a narration of the Nativity story. For this concert on December 29, actress Chandra Wilson, who has been nominated multiple times for an Emmy Award for her role as Dr. Miranda Bailey on “Gray’s Anatomy,” will narrate. A 50-piece orchestra will accompany the 300-plus-voice.

It is expected that the participation of Miami’s Ukrainian choir will inspire Florida’s large Ukrainian community to support and attend this event.

The following evening, December 30, the choir will sing the divine liturgy at St. Mary Ukrainian Catholic Church in Apopka, Fla., followed by a concert of Ukrainian Christmas carols.

The Assumption BVM Choir will give its annual Ukrainian Christmas Carol Concert in Miami on Saturday, December 2, at 7 p.m. Every year the multicultural audience becomes larger, with more and more people enjoying and praising the beauty of Ukrainian carols.