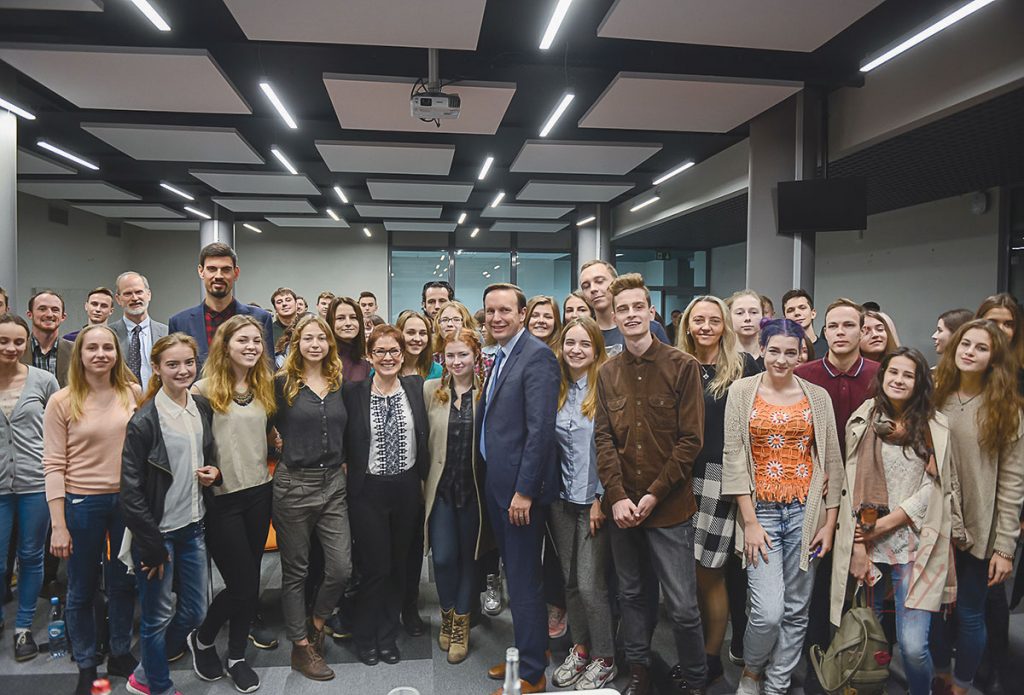 The senator is also ranking member of the U.S. Senate Subcommittee on Europe and Regional Security Cooperation. Thus, he knows very well what is happening in the area and in Ukraine, in particular.

This was Sen.Murphy’s fourth time in Ukraine, though his first time in Lviv and at UCU. Together with Sen. John McCain (R-Ariz.), he was on the Maidan during the Revolution of Dignity. “At that time we assured that the people of the United States of America are together with the people of Ukraine,” he said.

He stated that the U.S. is carefully watching what is happening in Ukraine. “I want to treat this visit as an opportunity to understand what changes have happened… and also how friends of Ukraine in The States can help. Clearly, the United States of America offers grants and credit, which help stabilize the economy of Ukraine. We hope that our support in the implementing of anti-corruption reforms will also be effective. But I know that we can do much more,” he commented.

The senator shared his experience on his blog, writing:

“Thankfully our pilots are able to land despite the low cloud ceiling, and we head off to my first speech at Ukrainian Catholic University. The Lviv area is where many of those in the Ukrainian community in Connecticut come from, and the Connecticut diaspora has specifically been very supportive of this school. That’s why I’m here to give a speech in front of about 75 students (a pretty good turnout for a Saturday afternoon!).

“These students are primarily concerned with the high level of public and private sector corruption in Ukraine. I learn from them how normalized corruption has become in Ukraine  –  teachers, doctors, parking enforcement officers all take money on the side to carry out functions that we would simply take for granted in the United States. Russia benefits from the corruption, because it undermines support for the Ukrainian national government that is trying to rally the country to fight the Russian invasion.

“I leave the speech energized to do more to help Ukraine in this fight for cleaner government.”