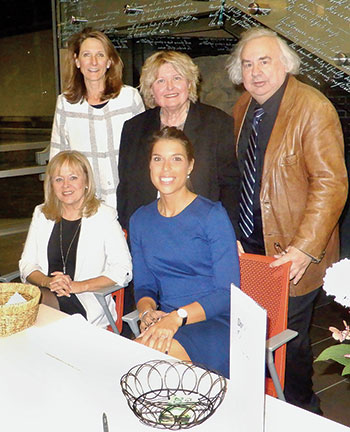 OTTAWA – The Ottawa screening of the award-winning feature documentary film “Recovery Room,” organized by the Ukrainian National Federation (UNF) Ottawa-Gatineau branch, was held at the City of Ottawa Centrepointe Theater Archives on October 19.

Mr. Luhovy described some of the many challenges Adriana Luhova, the film’s director, had in filming in the operating room in Kyiv, and the challenges he had in editing the hours of remarkable film footage and interviews that she shot.

Ms. Hrycenko mentioned that the documentary helps bring public attention to the ongoing war, and that the film reinforces the efforts of the Ukrainian Canadian Congress, the Ukrainian World Congress, the Canadian government and many community organizations in trying to help Ukraine. “Recovery Room” shows up-close the humanitarian work and dedication of the Canadian medical missions organized by the Canada Ukraine Foundation to help wounded Ukrainian soldiers. She also read greetings written by Ms. Luhova from Lviv for the Ottawa public attending the screening of her documentary.

The reception following the film gave an opportunity for everyone to linger and share their impressions. Present were Nadia Vozdigan, the first secretary of the Embassy of Ukraine in Ottawa, and Ihor Michalchyshyn, chief executive officer of the Ukrainian Canadian Congress.

The film screening was accompanied by a display of some large-scale photographs taken by Ms. Luhova at the Main Military Clinical Hospital in Kyiv.

Among the many comments written at the Ottawa screening in the books placed on the table for viewer impressions were: “An outstanding piece of work, very well put together in the context of the whole conflict. Very moving. Should be seen worldwide!”; “What an important piece of work! It shows the truth about Russian aggression in Ukraine…”; “You have managed to capture this story beautifully and honestly… eloquently told”; “Wonderful film! Should be in all the public libraries”; and, “Your dedication, Adriana, is so inspirational. Thank you for touching our hearts and sharing your story with the world…”.

The documentary “Recovery Room” continues to be screened in Canada and United States. The documentary is under the patronage of the Ukrainian World Congress and sponsored by many Edmonton organizations.

For further information, to help support the film or to organize a screening, readers may contact mmlinc@hotmail.com, see www.recoveryroomthemovie.com or call 514-481-5871.

A trailer of the film may be viewed at:  https://www.youtube.com/watch?v=1E3 DR4aULmg.