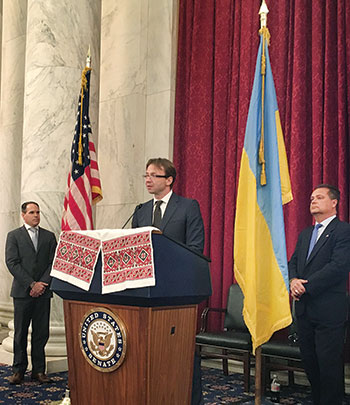 WASHINGTON – The Ukrainian National Information Service (UNIS), the Washington bureau of the Ukrainian Congress Committee of America (UCCA), marked its 40th anniversary with an evening reception on Capitol Hill on Wednesday, October 11.

Michael Sawkiw, UNIS director and UCCA vice-president, began the evening’s program by warmly thanking the guests for supporting the work of the UNIS office before introducing Bishop John Bura, auxiliary bishop for the Ukrainian Catholic Archeparchy of Philadelphia, to deliver the invocation. UCCA’s Andrij Dobriansky was invited to sing the Ukrainian and American national anthems.

In keeping with the tradition established at previous advocacy events, Mr. Sawkiw bestowed several Friend of UNIS Awards – an honor reserved for those in Washington who have advocated for and expressed their continued support for Ukraine.

A vocal member of the House Foreign Affairs Committee, Congressman Boyle, who represents part of Philadelphia and its suburbs, has been an outspoken advocate for Ukraine since entering Congress during Ukraine’s Revolution of Dignity. Upon receiving his award, he stated, “I am truly honored to be recognized by the Ukrainian American community but more importantly, to be considered a friend of Ukraine. I am proud to represent a community of strong, vibrant and proud Ukrainian Americans that live in my congressional district.”

Ambassador Chaly warmly thanked the UNIS office, UCCA’s network of Ukrainian organizations and volunteer members, and the entire Ukrainian American community in general, for their decades of work in support of Ukraine’s Independence and for the strengthening of bilateral relations between our two nations.

Following his words of gratitude for the Friend of UNIS Award, the ambassador surprised Mr. Sawkiw by presenting him with the Order of Prince Yaroslav the Wise (5th degree) on behalf of the president of Ukraine. Emphasizing Mr. Sawkiw’s significant contribution to strengthening U.S.-Ukraine relations, the ambassador went on to explain that this award, the second highest civilian honor bestowed by Ukraine, recognized the totality of his work as the director of UNIS, his current vice-presidency and his former presidency of the UCCA, as well as his chairmanship of the U.S. Committee for Ukrainian Holodomor-Genocide Awareness.

Lithuania’s ambassador to the United States, Rolandas Kriščiūnas, accepted the last award of the evening on behalf of Minister Linkevičius. The ambassador read a letter of acceptance from the foreign affairs minister, which stated in part: “Today Lithuania stands with Ukraine as her friend and as an ally. Aggression against Ukraine was also an act of aggression against the values that unite the Euro-Atlantic community. Therefore, it is not Ukraine’s fight alone. I thank UNIS for this award and for its tireless efforts in informing the public about the gravest dangers to Europe’s freedom in the 21st century. In this common mission, Lithuania will continue supporting Ukraine…”

Throughout the evening, additional members of Congress stopped by to congratulate the UNIS office on its 40th anniversary, including Congressional Ukrainian Caucus Co-Chair Rep. Marcy Kaptur (D-Ohio) and Rep. Paul David Tonko (D-N.Y.).

John Lansing, the CEO of the Broadcasting Board of Governors, the U.S. government agency that supervises Voice of America, also attended the reception. Addressing the attendees, he emphasized the importance of the media in today’s society and conveyed his congratulations to the UNIS office.

Two former directors of the UNIS office were invited to the podium to share remarks: Tamara Olexy, current executive director of the UCCA National Office and a former UCCA president, and George Nesterczuk, a founding member of UNIS and longtime political advisor and government official since his appointment to the U.S. Office of Personnel Management during the Reagan administration.

The evening’s program concluded with a special video presentation from Kyiv by Marie Yovanovitch, the ninth and current U.S. ambassador to Ukraine, and the performance of two Ukrainian dances by the Carpathia Folk Dance Ensemble.

In her pre-recorded remarks, Ambassador Yovanovitch congratulated the UNIS office on its 40 years of service to the community, and quoted the words of Taras Shevchenko, “Keep fighting – you are sure to win.”