Chicago and New York events raise more than $500,000 for UCU 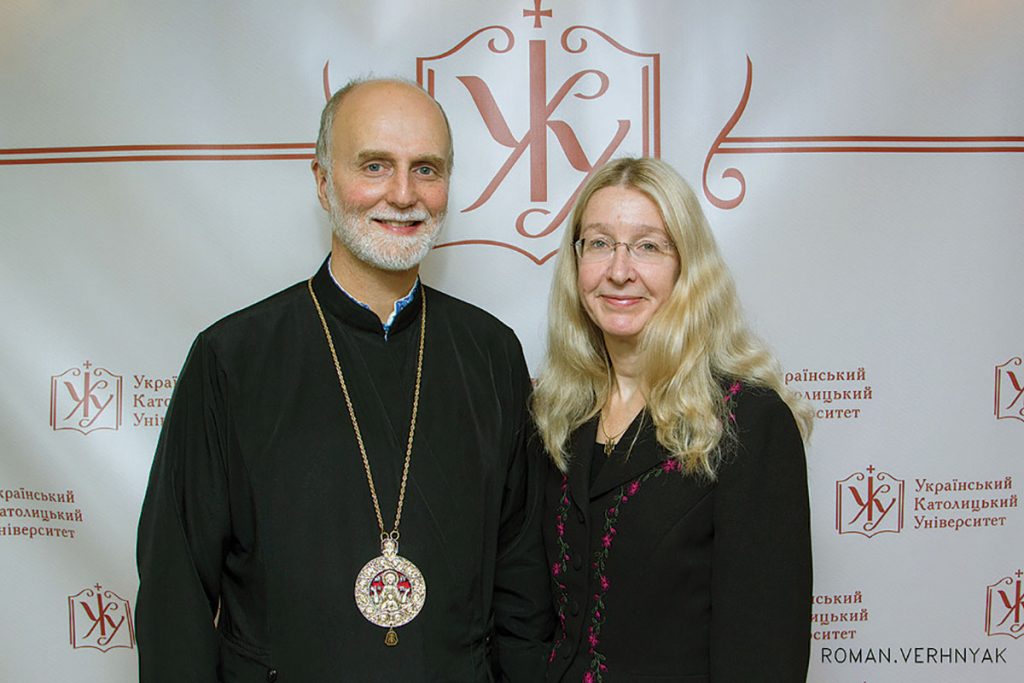 CHICAGO – Recent events in Chicago and New York City together raised more than half a million dollars for Ukrainian Catholic University (UCU). Both the spiritual and the secular were emphasized at the events: Bishop Borys Gudziak, president of UCU, shared the New York program with Michigan-born Dr. Ulana Suprun, acting minister of health of Ukraine, while Chicago’s audience greeted Bishop Benedict Aleksichuk and noted international business consultant Adrian Slywotzky.

Chicago’s October 29 luncheon was held at the Ritz-Carlton Hotel. Bishop Benedict, a graduate of the UCU Lviv Business School and a former UCU senator (member of the board), gave the blessing and then spoke to the gathered supporters.

Local friends of UCU also had an opportunity to meet other graduates and students and to see and hear about their accomplishments, starting with a brief video presentation, “Aspire to Greatness.” The film showed the results of the recently completed, seven-year Comprehensive Campaign, “A New Generation for a New Ukraine.” The fund-raising effort gathered donations from 15,000 contributors worldwide for a total of $67.1 million, which were used to build a new campus with four buildings, expand programs and faculty, increase scholarships and student enrollment, including an outreach effort to enroll students from throughout Ukraine, including a young woman, a Crimean Tatar, who was highlighted in the film.

The Rev. Stepan Sus, an UCU graduate who is now a chaplain for the Ukrainian military, spoke of the challenges of his ministry. Also, four current students of the Lviv Business School (LvBS) at UCU, who were visiting the U.S. to learn “how business works,” as one of them expressed it, shared their experiences at UCU that help them bring both professionalism and ethics to the entrepreneurial activities in which they are already engaged.

Entertainment was in abundance at the event, as well. The highlight was the P&P Quintet (of the Garrison Church of the Holy Apostles Peter and Paul in Lviv), which sang for guests in the vestibule as they arrived at the event and then gave a mini-concert at the end of the afternoon. The Chicago Bandura Ensemble Char-Zillia, which has an UCU graduate as a member, performed, as did violinist Krystyna Dobrowolsky Lopez, daughter and granddaughter of dedicated donors to UCU’s funding arm in North America, the Ukrainian Catholic Education Foundation (UCEF).

Keynote speaker Mr. Slywotzky, partner emeritus of leading global management consulting firm Oliver Wyman, informed the assembled guests of the numerous, sometimes not well-known, accomplishments of the young university and of reasons he has dedicated his time and talent to UCU, both as a guest lecturer and supporter of LvBS.

The audience was clearly convinced by Mr. Slywotzky, as $230,000 was raised for the support of the university, including a $100,000 scholarship endowment and major support from the Selfreliance Foundation and  Selfreliance Ukrainian American Federal Credit Union and The Heritage Foundation of First Security Federal Savings Bank.

The UCEF expressed gratitude to first-time master of ceremonies Andrij Glubisz, the Chicago Friends of UCU Committee, and committee chairs Dr. Vassyl Lonchyna and Dr. Roksolana Tymiak-Lonchyna, who, among their other numerous contributions to the event, “discovered” the wonderful quintet in Lviv.

The luncheon in New York City was held a week later, on November 5, at The St. Regis. A little more than seven years ago, the start of the UCU Comprehensive Campaign was announced at an event in New York City by Bishop Borys Gudziak, then rector of UCU. With the end of this seven-year fund-raising effort, Bishop Borys, now president of UCU, returned to New York City.

He thanked the more than 200 guests, many of whom have been attending the luncheons for more than a decade, for their continuous support of the university in Lviv. He reflected on the long history of UCU, first as a dream of Metropolitan Andrey Sheptytsky, then through the efforts of Patriarch Josyf Slipyj in Rome, to the remarkable campus now in Ukraine. Despite the long, at times complicated, history, the dream of having such a university and vision of the university’s purpose always remained, stated Bishop Borys.

He introduced the Rev. Taras Lonchyna, who later offered the benediction, as both a close friend and one of Patriarch Josyf’s first students in Rome. He awarded and personally thanked Jaroslawa Rubel and Mykola Haliv, members of the original New York Friends committee, for their years of friendship, personal support and boundless efforts to build UCU.

The Rev. Michael Perry, who offered the opening prayer, spoke about his recent trip to UCU. In the United States, he noted, if grass is needed on a plot of land, sod is delivered, watered and immediately there is a lawn. In Ukraine, he said, he looked out his window at UCU and saw a gardener every morning. “First the soil is prepared, then the seed is sown, the plot is watered, the first blades are tender, but the roots grow strong and with patience and time, the land becomes green.” From a decrepit Soviet building with a small number of students, UCU has grown deep roots and thrived, having been tended with the support of thousands of gardeners through the years, he noted.

The dean of the School of Public Health at the University of Maryland, Dr. Boris Lushniak, a friend since childhood of Bishop Borys, was the master of ceremonies who tied the event together with his dynamic style. A former acting surgeon general of the United States, he was instrumental in containing the spread of Ebola and preventing an epidemic. Introducing Acting Minister of Health Suprun, who has pioneered the effort to reform health care in Ukraine, Dr. Lushniak joked that some people view the title of “acting” as a temporary placeholder, when, in fact, it really means that these are the people who “actually act and get things done.”

Dr. Suprun has close ties to UCU. Under her leadership, the School of Rehabilitation Medicine was established. She began her serious and comprehensive presentation with a moment of lightness. Standing with her back to the guests, she took a “selfie” with UCU supporters in the background. This clever idea, she noted came from her assistant, a graduate of UCU. “Before I finish speaking this afternoon,” she said, “my assistant will have received this photo, will have posted the photo on my page with an explanation of what we are doing here, which then will be seen by thousands of people.” While this may seem to be an insignificant moment, this spirit of innovation, of communicating with people, of bringing change and energy to the government, in service to the citizens of Ukraine, she noted, is embodied in UCU.

The event in New York was fortunate to have not just one, but two members of the Slywotzky family as part of the program. Soprano Vira Slywotzky, daughter of Mr. Slywotzky and Christine Balko Slywotzky, strong and dedicated supporters of UCU, held the guests spellbound with her magnificent voice and presence. Singing in Italian, English and Ukrainian, she moved through a selection of popular songs, as well as familiar solos from famous operas.

As he did a week earlier at the event in Chicago, Mr. Slywotzky took the guests through a serious, yet entertaining quiz about the accomplishments of UCU. This type of information, he noted, is the type that guests can bring to conversations with their friends and thereby encourage support for UCU with examples of success.

Early in the afternoon, Bishop Borys Gudziak presented awards to Self Reliance New York, the Ukrainian National Women’s League of America and Roma and George Temnycky for their significant contributions to the Comprehensive Campaign.