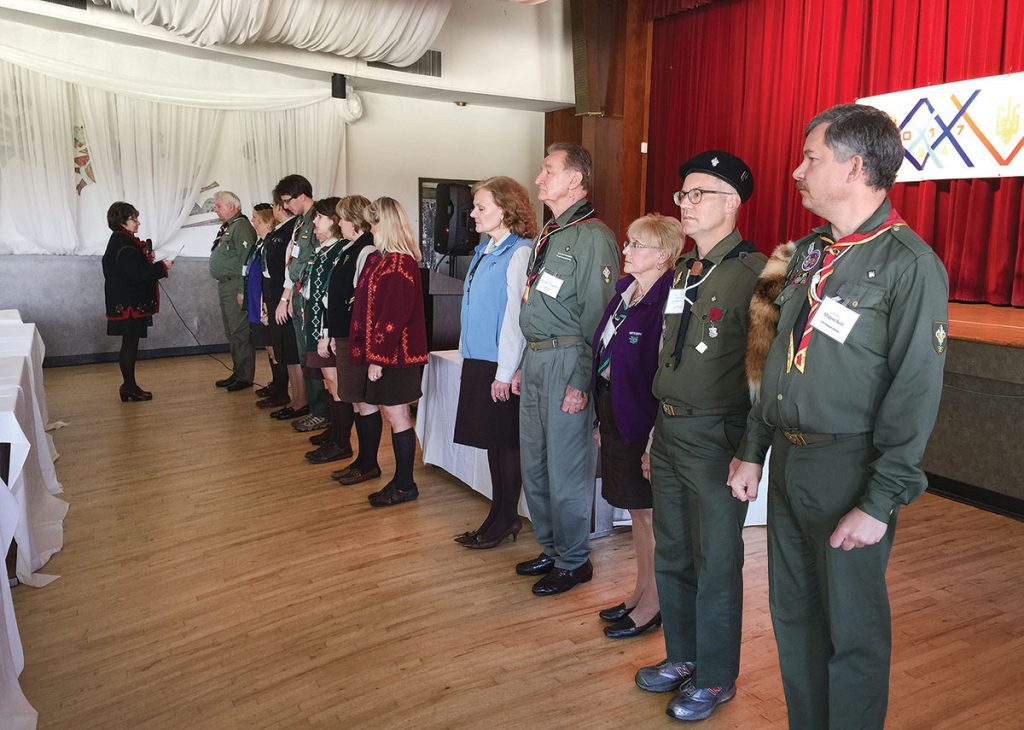 Andrea Zharovsky
The new leadership of Plast Ukrainian Scouting Organization in the U.S.A. is sworn into office.

KERHONKSON, N.Y. – The 35th annual national convention of Plast Ukrainian Scouting Organization in the U.S.A. was held over the weekend of October 20-21 at Soyuzivka Heritage Center in Kerhonkson, N.Y. Members from various branches of Plast came together to report on activities of the previous year and to decide on the organization’s goals for the upcoming year.

The annual convention, known as Krayovyi Plastovyi Zyizd, is a forum for discussion of resolutions regarding programs for Ukrainian scouts in the United States and for making changes within the organization. Representatives of all Ukrainian scouts – delegates of Plast branches and groups, and of young adult and senior sororities and fraternities, as well as members of the Plast National Board of Directors participated in the conference. Representatives of the World Plast Executive also attended.

The current chair/chief corporate officer of Plast U.S.A., George Huk, addressed convention participants and thanked everyone for their teamwork in the organization, which is thriving. He also stressed the importance of improving Plast educational programs for both cub scouts and scouts.

Various committees were formed on Saturday to discuss issues concerning camps, youth programs, amendments to the by-laws and finances. Later in the day, the committees presented the results of their discussions and recommendations.

Late on Saturday afternoon, convention participants attended liturgy at Holy Trinity Ukrainian Catholic Church. The pastor, the Rev. Dr. Ivan Kaszczak, who is Plast’s chaplain and a member of the Khmelnychenky fraternity, officiated.

That evening’s program included a banquet and an indoor
“vatra” (campfire) in Soyuzivka’s Main House lobby that was prepared by young adult Plast members. The vatra was very jovial with lots of singing and laughter, and the evening ended with the traditional “Nich Vzhe Ide.”

During the convention it was reported that several new Plast groups are being formed, including a group in Sloatsburg, N.Y., which will be operating as part of Plast’s Yonkers branch, and another in Lindenhurst, N.Y.  There is interest in Plast activity also in other parts of the United States; thus, Plast is growing and expanding its footprint.

To commemorate the 100th anniversary of the date (April 29, 1918) when Ukrainian sailors raised the Ukrainian national flag on all the ships of the Black Sea Fleet, 2018 has been declared the Year of Sea Scouting.

For more on the Plast National Board of Directors and the 35th annual convention of Plast U.S.A., readers may log on to www.plastusa.org.

Natalia Voronka Bilash is the director of press and publications on the Plast National Board of Directors in the U.S.A.