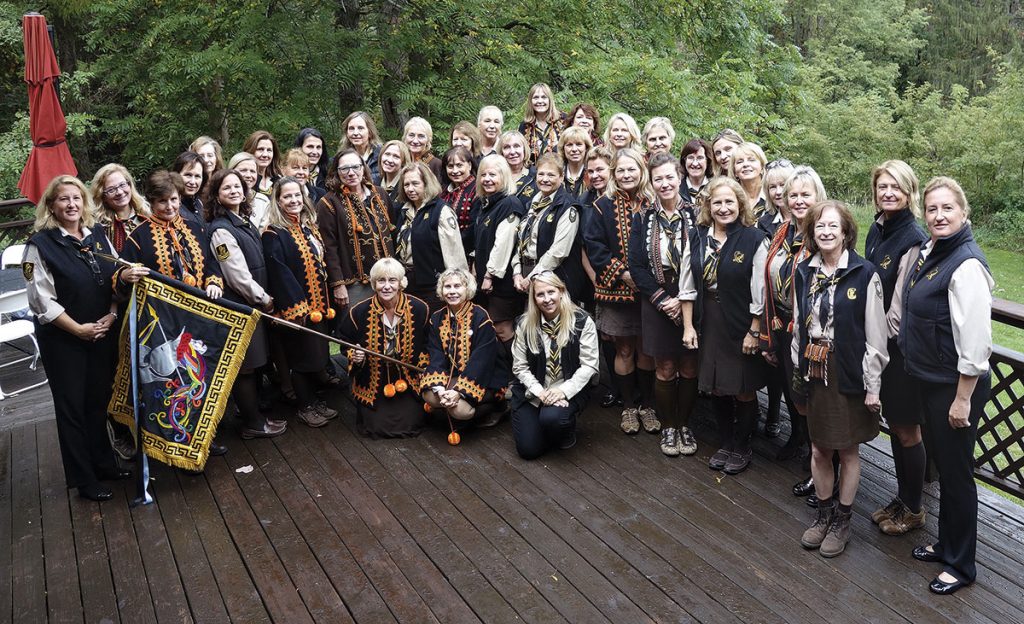 KERHONKSON, N.Y. – Members of the senior Plast sorority Spartanky met for their annual retreat and conference on September 29-3 at the Soyuzivka Heritage Center in Kerhonkson, N.Y.

Thirty-nine members from the tri-state and Philadelphia areas reunited at the annual conference to refresh their commitment to Plast Ukrainian Scouting Organization, review the sorority members’ accomplishments of the past year, and plan another year of actively supporting the goals of the parent Plast organization.

The attendees were fortunate to enjoy delightfully warm fall weather and participated in several of the Autumn Wild Mushroom Retreat activities, including a yoga class on Friday night.

The conference officially began on Friday night with a sumptuous multi-course dinner created by chef Andrey Sonevytsky that featured farm-to-table seasonal fare with a focus on using mushrooms as an ingredient. Afterwards the conferees took part in a traditional campfire with a program of skits that, under the theme of “Health and Longevity,” poked fun at the foibles of aging gracefully (or not). The jokes and skits continued late into the evening to everyone’s delight.

The serious planning stage of the conference took place on Saturday. Roksolana Kyzyk and Ariadna Holynsky, both from New Jersey, were enthusiastically inducted into the sorority as full members after their one-year terms as candidates. As candidates, they had organized St. Andrew’s Eve (Andriyivskiy Vechir) activities for Plast scouts. A new member, Marianka Hawryluk of Kerhonkson, was warmly welcomed into the sorority as a candidate.

During the formal deliberations, the sorority members reviewed their major projects from the previous year: Beginners’ Camp at East Chatham, N.Y.; testing of older campers for Plast physical fitness badge requirements; and the Ecology Committee’s clean-up of a heavily used trail at the camp in East Chatham during the summer.

In addition, local chapters organized several events, including a winter outing where cub scouts could complete merit badges in snow sports, a traditional St. Andrew’s Eve for teen scouts, as well as a Christmas party for senior Plast members in New Jersey.

Everyone left the conference refreshed and uplifted by the wonderful feeling of fellowship and union. The next conference is already being planned for 2018 by the New York/ New England chapter. For further information about the Spartanky sorority, readers may contact Ms. Iwanik at ciwanik@yahoo.com.