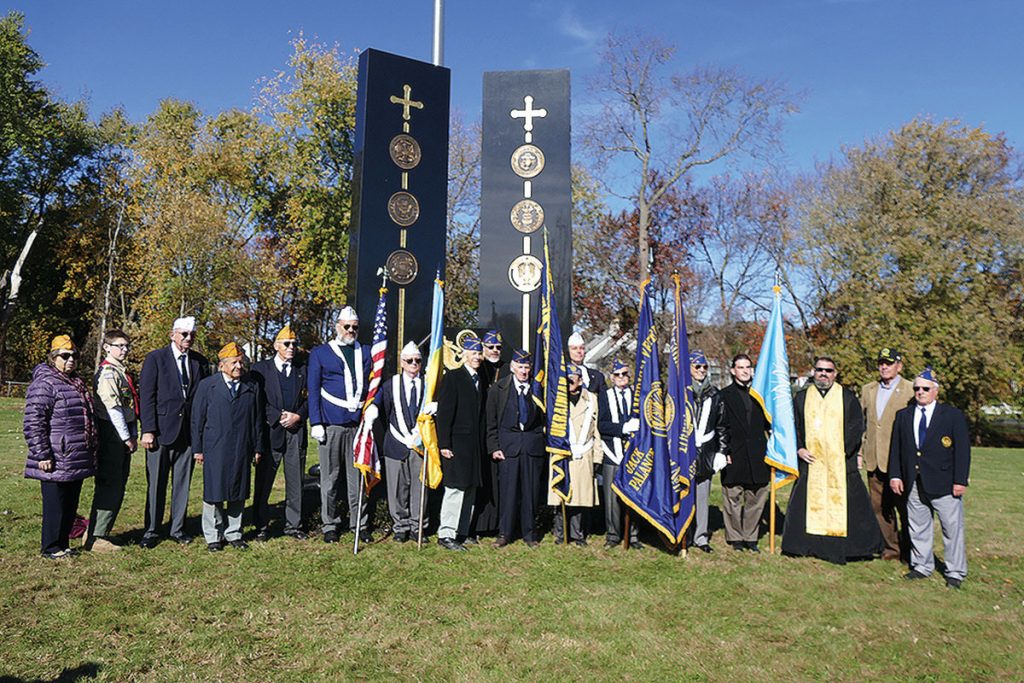 WESTFIELD, N.J. – Veterans Day was celebrated at the Ukrainian American Veterans National Monument, in front of St. Andrew Memorial Church in South Bound Brook, N.J., with a service conducted by Archbishop Daniel of the Ukrainian Orthodox Church of the U.S.A., with the assistance of clergy and seminarians from St. Sophia Ukrainian Orthodox Theological Seminary.

Archbishop Daniel explained that Veterans Day was first celebrated on the 11th hour of the 11th day of the 11th month, in recognition of Armistice Day, November 11, 1918, commemorating the end of World War I. Later, the holiday was changed to Veterans Day to commemorate all veterans, who have served during war and peace. The archbishop also explained that the UAV National Monument honors all Ukrainian American men and women who have served in the U. S. Armed Forces, living and deceased.

Assisting Archbishop Daniel, who is a member at large of the UAV, in presenting the wreath were Mike Fedirko and Walter Bodnar, both World War II veterans. A luncheon followed.

Attending the Veterans Day Ceremony at Arlington National Ceremony, in Arlington, Va., were Walter Stepaniak of Post 17 (Whippany,) and Nicholas Jakowiw of Post 19 (Spring Valley, N.Y.). Mr. Stepaniak, a Vietnam war veteran, visits the grave of his brother Master Sgt. Jurij Stepaniak, also a Vietnam veteran, who is buried at the cemetery. The Ukrainian American Veterans color guard marched with nationwide veterans organizations, as well as the U.S. Armed Forces. This tradition was started by Matthew Koziak, while he was national commander of the Ukrainian American Veterans in 2008-2012. This year the ceremony was attended by Vice-President Mike Pence, with thousands in attendance.

The Veterans Day Ceremony is an annual event that is open to those who want to remember and honor all veterans, and each post holds ceremonies at its local monuments as well. For information about the UAV, including membership and the UAV National Registry, see www.uavets.org.