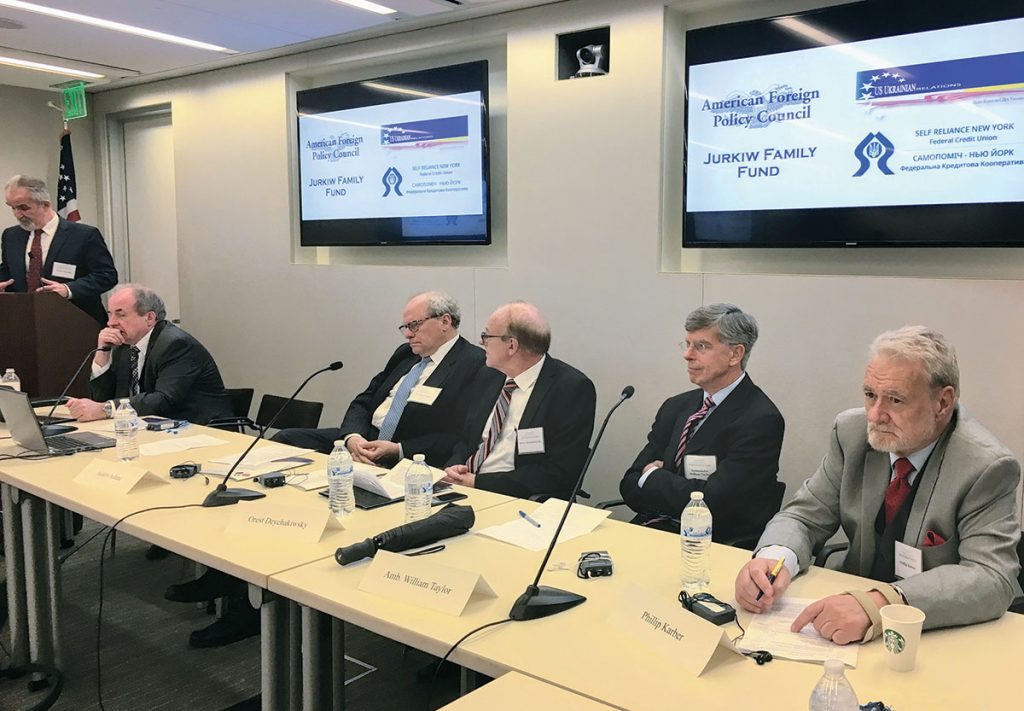 WASHINGTON – The Center for U.S.-Ukraine Relations (CUSUR) hosted its 18th roundtable conference in Washington, continuing on a theme established three years ago – “Ukraine’s Quest for Mature Nation Statehood.” Over the course of the late morning and afternoon on October 12, 20 scholars and diplomats took part in two panel discussions and three highlight presentations focusing on the issue of “Social Cohesion in Contemporary Ukraine.”

This roundtable conference coincided with several additional events in Washington, including UCCA’s Ukrainian Day advocacy event on October 11, as well as the Open World Leadership Center’s visit of 20 Ukrainian activists currently in training in Kansas, Illinois and Colorado. Many participants of both groups attended the conference and participated in the open forum of questions and answers following each presentation.

Prof. Walter Zaryckyj of CUSUR welcomed the conference attendees and summarized the broad discussions of the earlier “Quest” roundtables. Tamara Olexy, director of the Ukrainian Congress Committee of America’s (UCCA) National Office, introduced Andrii Levus, a member of Ukraine’s Parliament, former vice-chairman of Security Service of Ukraine (SBU) and an active leader of the Maidan Self-Defense Corps during the Revolution of Dignity. Mr. Levus drew on his understanding of that revolution, describing its spirit as the basis of Ukraine’s modern civil society.

While the activists who occupied Kyiv’s Maidan of Independence were a collection of people from different social strata, adherents of different religious faiths and conversant in many languages, he explained that their experience on the Maidan, as well as subsequently, during their defense against Russia’s recent military aggression, served to unite the Ukrainian nation as one in a manner that had not happened since Ukraine regained independence. In his estimation, the Ukrainian nation – government and civil society – errs whenever it deviates from the principles expressed on the Maidan.

Adrian Karmazyn of the U.S.-Ukraine Foundation moderated the first panel discussion of the day, “Taking Measure of Actual and Potential Social Divisions in Ukraine.”

Adrian Karatnycky, senior fellow at the Atlantic Council, focused on class associations in Ukraine, where he said nearly 80 percent of Ukrainians live on the margins of the economic spectrum. On the issue of the recent education reforms passed by Ukraine’s Parliament, Mr. Karatnycky pointed out that, for all of the outrage recently expressed about the right of minority languages in Ukraine, this legislation included only a “fairly modest” change when mandating that Ukraine language education begin in high school. Considering the lack of common understanding in some fields of industry or areas of the country, he did not view such a standard as either harsh or excessive in comparison to true language repression.

Both Herman Pirchner of the American Foreign Policy Council and Glen Howard of the Jamestown Foundation expounded on their most recent fact-finding missions to Ukraine, which focused on the state of Ukraine’s armed forces. In their estimation, the recent transformation of Ukraine’s military services to a modern fighting force cannot be undervalued. However, as within other government departments, the need to root out corruption in the defense sector is paramount for this transformation to succeed.

In his remarks, Lewis Madanick of the Open World Leadership Center attempted to look ahead to the 2019 election cycles in Ukraine, determining which political parties or personalities could best harness a transformed Ukrainian society four years after the Revolution of Dignity and Russia’s military invasion and current occupation. Political analysis, he said, should include the 2 million people displaced from Crimea and the occupied territories in the Donetsk and Luhansk oblasts.

Lastly, Myroslava Gongadze, head of Voice of America’s Ukrainian Service, went into detail about the gulf exhibited between Ukrainian society and the government, both before the Revolution of Dignity and after. Of note, she said, is the remaining deficit in Ukraine’s civil society of leaders and analysts with experience in the military and national security sector. Whereas Western countries such as the United States have a long record of civilian involvement in military affairs, Ms. Gongadze traced this gap in Ukraine to a legacy whose origins predate Ukraine’s independence.

During the question-and-answer period following this panel, journalist Irene Jarosewich focused on gender roles in Ukraine. According to figures she provided, women are responsible for nearly all the fresh fruit and vegetable production in Ukraine, as well as for an equally large proportion of livestock cultivation. Given their outsized role in maintaining the nation’s economy, there exists a deficit in the role of women in government and other sectors that should be addressed on a national level. In response to Ms. Jarosewich, Ms. Gongadze leaned into her microphone and succinctly stated, “I agree.”

Following a lunch break, the room overflowed with additional attendees arriving in time to hear remarks by Josef Zissels, head of the Association of Jewish Organizations and Communities of Ukraine and a founding member of the December First Initiative. Following a brief introduction by Roman Popadiuk, former ambassador of the United States to Ukraine (1992-1993), Mr. Zissels presented his views on the present Presidential Administration of Ukraine, Ukraine’s civil society and the interrelation between the two, following three years of societal transformation.

In response to his presentation, one of the Open World delegates in attendance rose to validate the existence of a robust civil society in Ukraine, describing the swift citizen mobilization in her hometown that managed to respond to a fire faster than the local authorities.

The afternoon’s panel discussion was moderated by Janusz Bugajski of the Center for European Policy Analysis. Broadly centered on whether a “value-based national agenda” could mend remaining fissures in Ukrainian society, the panel comprised Ambassador William Taylor of the United States Institute of Peace; Orest Deychakiwsky, former longtime advisor to the U.S. Helsinki Commission; Anders Aslund of the Atlantic Council; and Phillip Karber, president of the Potomac Foundation.

The final speaker of the day was Julia Osmolovska of the Mykhailevych Foundation, who added to the different perspectives on Ukraine’s social cohesion by presenting both over-all and specific views from established voices in Ukrainian academia. Her suite of demographic research was presented in detailed charts and graphs, some of which harkened back to themes discussed earlier in the day. Ms. Osmolovska’s closing presentation was introduced by CUSUR’s Mykola Hryckowian, who also contributed to the roundtable conference by serving as English-language translator for many of the day’s speakers.