2017: Our Churches: hierarchs, institutions in the news 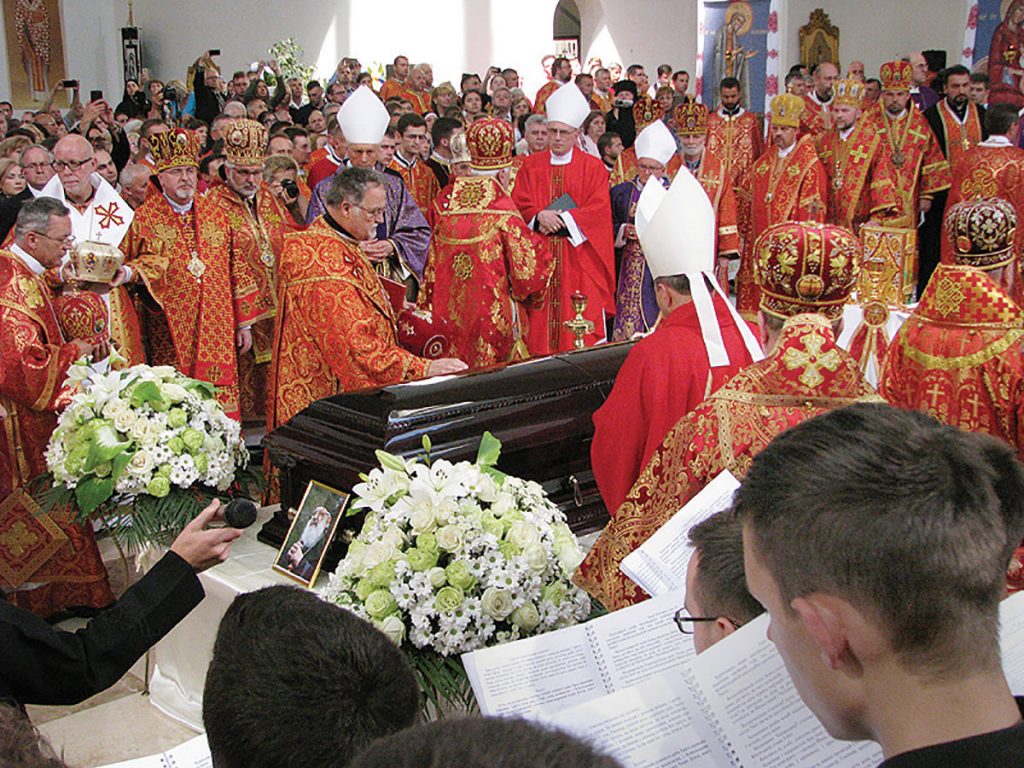 UCC
Metropolitan-Archbishop Stefan Soroka, joined by numerous bishops and clergy, pays his last respects to Cardinal Lubomyr Husar, former primate of the Ukrainian Greek-Catholic Church, at the Patriarchal Cathedral of the Resurrection of Christ in Kyiv on June 5.

Thousands attended the annual St. Thomas Sunday Pilgrimage weekend on April 22-23 at St. Andrew Ukrainian Orthodox Memorial Church and cemetery grounds. Divine liturgy was celebrated by Archbishop Daniel on Saturday and by Metropolitan Antony on Sunday. As the faithful had the gravesites of relatives blessed by local and visiting clergy, visitors had an opportunity to enjoy Ukrainian foods as well as the myriad items for sale at the Ukrainian Cultural Center. Other events during the weekend included a picnic, sponsored by the Ukrainian Orthodox League to benefit the St. Sophia Theological Seminary, and the blessing of an icon of the history of Christianity in Kyivan Rus’ by Rem Bahautdinov, in addition to six other works by Mr. Bahautdinov that were displayed at the Ukrainian Historical and Educational Center of New Jersey. Following divine liturgy on Sunday, visitors prayed for the victims of the Holodomor and the Chornobyl disaster, as well as all servicemen and women who have fought for the United States and Ukraine. Prayers were also offered at the crypt of Patriarch Mstyslav I, located in Holy Resurrection Mausoleum underneath St. Andrew Memorial Church.  An ice cream social was hosted at the St. Sophia Theological Seminary on Sunday afternoon to conclude the weekend’s events, while children played on the grounds nearby.

Cardinal Lubomyr Husar, major archbishop of the Ukrainian Catholic Church from February 26, 2001, to February 10, 2011, died on May 31 following a serious illness at the age of 85. He was revered as patriarch of the Ukrainian Catholic Church. Born in Lviv in 1933, he and his family in 1944 fled westward, ahead of the advancing Soviet army. He lived in displaced persons’ camps near Salzburg, Austria, and in 1949 emigrated to the United States. He studied at St. Basil’s College in Stamford, Conn., from 1950 through 1954, and continued his studies at the Catholic University of America in Washington and at Fordham University in New York.

Cardinal Husar’s priestly years began with his ordination on March 30, 1958, in Stamford, Conn., where he taught at St. Basil’s until 1969. Between the years 1966 and 1969, he was pastor at Holy Trinity Ukrainian Catholic Church in Kerhonkson, N.Y.  From there, he went to study in Rome, he earned his doctorate at the Pontifical Urbaniana University in 1972, where he joined the Studite Ukrainian monastic order at the Studion Monastery and was elected hegumen (superior) of the monastery in 1974.  In 1977 he was consecrated a bishop by Cardinal and Patriarch Josyf Slipyj and in 1978 was named archimandrite of the Studite Monks in Europe and North America. With the collapse of the Soviet Union, Bishop Lubomyr returned to Ukraine to re-build the Church beginning with its Holy Spirit Seminary in Lviv. When Major Archbishop Myroslav Ivan Lubachivsky died on December 14, 2000, Pope John Paul II named Bishop Lubomyr as apostolic administrator. In 2001, Bishop Lubomyr was elected by the Synod as head of the Ukrainian Greek- Catholic Church and the following month was named a cardinal by Pope John Paul II, who visited Ukraine that year. Cardinal Husar was named the first chancellor of the Ukrainian Catholic University in Lviv. Under his leadership, the major archiepiscopal see was moved from Lviv to Kyiv, Ukraine’s capital.

Cardinal Husar’s funeral, which was held at the Patriarchal Cathedral of the Resurrection of Christ in Kyiv on June 5, was led by Patriarch Sviatoslav. He was joined by Archbishop Cyril Vasil, secretary of the Congregation for the Eastern Churches, as a personal envoy of Pope Francis, and Archbishop Claudio Gugerotti, apostolic nuncio to Ukraine. Pope Francis paid his final respects to Cardinal Husar in a letter addressed to Patriarch Sviatoslav. After his ministry as “father and head” of the Ukrainian Greek-Catholic Church, the pope said, and with the onset of old age and illness, Cardinal Husar’s presence became “even more intense and rich.” He prayed for all, and when he spoke, “everyone felt that a Christian was speaking, a Ukrainian passionate about his identity, always full of hope, open to the future of God.”

The Ukrainian Catholic University in Lviv hosted a conference on April 24 with U.S.- and Canada-based as well as worldwide leaders of occupational therapist organizations. With a focus on Ukraine, the conference hoped to highlight foreign experience in occupational therapy and explore how it can help the development of the practice in Ukraine. These topics were discussed not only at the academic level, but at the governmental level as well. At the time of the conference, only four certified OTs in Ukraine had received education abroad. It was explained that students should focus on the OT standard practice to not propose prescriptions, and how they should be sensitive to local culture, support human rights and that they look to prevent health issues and promote good health as these relate to intervention and treatment. The entire needs of the patient must be considered – physical, cognitive and emotional. UCU’s School of Rehabilitation Medicine and Ukraine’s Ministry of Health are cooperating on programs in Kyiv in addition to Lviv and Dnipro.

The Metropolitan Andrey Sheptytsky Center of the Ukrainian Catholic University on September 10 opened its first exhibit, “Ecce Homo: Sheptytsky Among Us.” Oleh Yaskiv, director of the center, recounted how the metropolitan from the years 1865-1944 can speak to today’s youth through a non-traditional exhibit and can perhaps serve as a motivator. The exhibit space itself, with its glass walls, forces a modern approach toward video, audio, installations and artifacts. The center, Dr. Yaskiv noted, hopes to attract not only scholars, researchers and historians, but intellectuals, the general public and youth as well. The center was blessed by Bishop Borys Gudziak on September 10, with some 180 guests from the United States and Canada to witness the event and take part in the celebrations. The center was made possible with donations during UCU’s campaign “A New Generation, A New Ukraine” (2010-2016). Bishop Borys noted that the aspergillum he used to bless the center was the same one used by Pope John Paul II during his visit to Ukraine in 2001. The main funder of the center, James Temerty, a Canadian philanthropist, was honored with a symbolic key to the center, and Stefan Behnisch, the architect who designed the center, was recognized for his work.

The Ukrainian Orthodox Church of the U.S.A. kicked off its centennial celebrations with a proclamation and advertisement card. The card was distributed on August 14 as part of the Great Feast of the Baptism of Ukraine, and the proclamation was made on September 12. Founded in 1918, the UOC-U.S.A. will celebrate 100 years at St. Andrew Memorial Church in South Bound Brook, N.J., during the Feast of Holy Equal-to-the-Apostles Great Prince Volodymyr on July 28, 2018, during the convention of the Ukrainian Orthodox League, scheduled to be hosted at the Metropolia Center of the UOC-U.S.A. in Somerset, N.J.

The League of Ukrainian Catholics (LUC) held its 78th annual convention on October 6-8 in Wilkes-Barre, Pa., hosted by the North Anthracite Council of the LUC. The convention slogan this year was “Serving One’s Neighbor, Serving Christ,” and the delegates were joined by Bishop John Bura, auxiliary bishop of Philadelphia who is based in Washington, and Bishop Andriy Rabiy, auxiliary bishop of Philadelphia. During the convention, guest speakers presented examples of caring for one’s neighbor. Delegates also visited St. George Orthodox Church in Taylor, Pa., to venerate the Myrrh-Streaming Icon of the Blessed Mother. The convention concluded with the celebration of divine liturgy, led by Bishop John and local clergy, which was followed by a farewell brunch. It was communicated that the 2018 convention is to be hosted by the Niagara Frontier Council.

Sen. Chris Murphy (D-Conn.), ranking member of the U.S. Senate Subcommittee on Europe and Regional Security Cooperation, and U.S. Ambassador to Ukraine Marie Yovanovich met with approximately 75 students at the Ukrainian Catholic University in Lviv on October 21.This was Sen. Murphy’s fourth trip to Ukraine (having stood on the stage during the Revolution of Dignity in Kyiv with Sen. John McCain) and his first to Lviv and UCU. He informed the students that he is impressed by the capabilities of Ukraine’s younger generation and its impact on the transformation of Ukraine. Sen. Murphy explained how the U.S. cooperates with Ukraine to stabilize the economy with grants and credits, in addition to anti-corruption efforts. Corruption, the students noted, had become normalized in Ukraine, from teachers and doctors, to parking enforcement officers. The students underscored how corruption benefits Russia, as it undermines the Ukrainian government, which is defending the country from the Russian invasion.

Cardinal Timothy Dolan, archbishop of New York, held an impromptu meeting with the entire student body and faculty of St. George Academy (SGA) in New York on November 1. The cardinal was in the school to celebrate a mass for All Saints Day that was organized by LaSalle Academy, which shares the SGA building.  LaSalle Academy invited the students from SGA to attend the mass. Following the service, the SGA students gathered in the library to hear an address by SGA principal Andrew Stasiw. It was then that Cardinal Dolan entered the library to surprise the students. Not only has Cardinal Dolan been to Ukraine twice, he explained his understanding of the perils endured during the Ukrainian Catholic Church’s history, especially during Soviet times, and his friendship with Patriarch Sviatoslav.

The Ukrainian Catholic Education Fund hosted two major fund-raising events in 2017 – one in Chicago on October 29 at the Ritz-Carlton Hotel and one in New York City on November 5 at The St. Regis – that together collected more than $500,000 for the Ukrainian Catholic University. In Chicago, guest speakers included Bishop Venedykt Aleksiychuk of the Ukrainian Catholic Eparchy of St. Nicholas in Chicago (a graduate of UCU’s Lviv Business School and former member of the UCU’s board) and Adrian Slywotzky, a noted international businessman. In New York, guest speakers included Bishop Borys Gudziak, president of UCU, and acting Minister of Health Dr. Ulana Suprun. During the Chicago event, guests viewed a film that showcased the progress of the seven-year campaign “A New Generation for a New Ukraine,” which had collected $67.1 million for the development of UCU, its academic offerings and its campus facilities. Students from UCU in Lviv, who were visiting the U.S. as part of gaining experience on how business works, shared their experiences from UCU.

During the Chicago event, $230,000 had been raised for the support of UCU, and an additional $100,000 scholarship endowment was made possible by the Selfreliance Foundation and the Selfreliance Ukrainian American Federal Credit Union, and the Heritage Foundation of First Security Federal Savings Bank. At the New York event, Bishop Borys introduced the Rev. Taras Lonchyna, and together they honored Jaroslawa Rubel and Mykola Haliv, members of the original New York Friends committee, for their years of friendship, personal support and efforts to build UCU. Other noted speakers included the Rev. Michael Perry, who recounted his experience at UCU, and Dr. Boris Lushniak, a childhood friend of Bishop Borys and former acting surgeon general of the United States, who introduced Dr. Suprun to the audience, noting that she was responsible for the establishment of UCU’s School of Rehabilitation Medicine.

Alex Kuzma, chief development officer of UCEF, thanked all of the donors who made it possible to raise $137,500, including from institutions such as Self Reliance New York Federal Credit Union, SUMA (Yonkers) Federal Credit Union, Brody-Lew and the Kozicky family Foundation.  Individual donations from major supporters were recognized, including by George Smith and Maria Moroz-Smith, the Rev. Michael Perry and a large anonymous donation, totaling $161,000. Awards were presented by Bishop Borys to Self Reliance New York, the Ukrainian National Women’s League of America, and Roma and George Temnycky for their contributions to the Comprehensive Campaign.