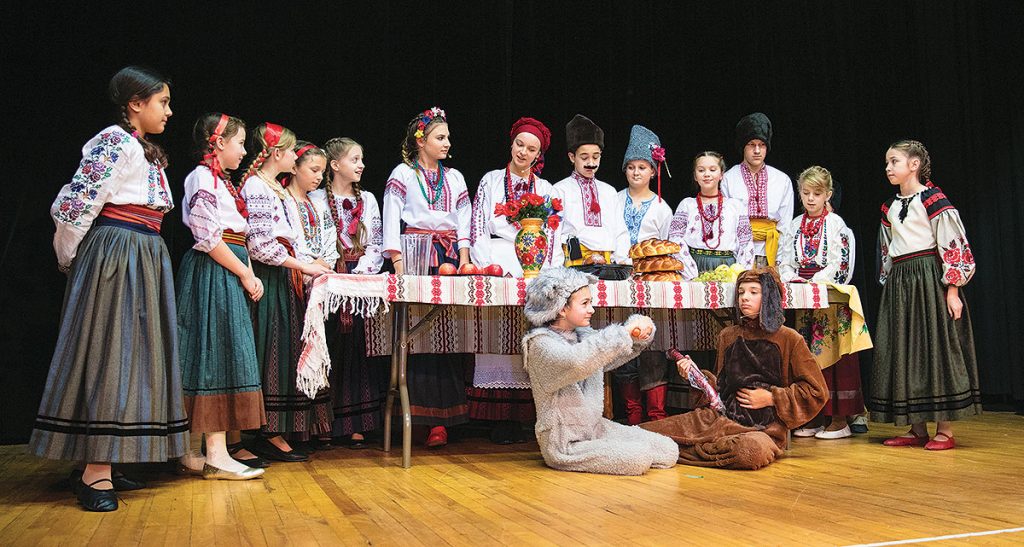 Roman Petriv
A scene from the play “Once Upon a Dog,” as performed by the Ukrainian Children’s Studio Theater Dzherelo.

EDMONTON, Alberta – The Edmonton Ukrainian community came together on December 16, 2017, at the Ukrainian National Federal Hall to celebrate the 25th anniversary of the Ukrainian Children’s Studio Theater Dzherelo.

Originally established by a group of Ukrainian mothers from Poland – Alexandra Cybulsky, Stefania Pik, Irena Prystasz and Slava Yopyk, and Ukrainian Women’s Organization member Olga Yaremko – as a Ukrainian language-learning meeting place for their own children, it has since developed into a full-fledged children’s drama group.

Dzherelo means “water spring,” a name chosen by Iryna Zavadska, a former actress from the renowned Maria Zankovetska Theater in Lviv, and the first artistic director of Dzherelo. Olga Myc took over from Ms. Zavadska for 10 years (1994-2004), to be followed by Alla Semenko, who has been artistic director for 13 years.

Run by the Edmonton Society of the Ukrainian Women’s Organization of Canada (UWO), Dzherelo holds an important place in the life of its members, some as young as 5. Every Friday evening the children get together to sing to a wonderful accompaniment by music instructor Dmytro Rusnak, recite poems and learn lines for the upcoming plays.

Ms. Semenko says that, although the amateur theater exposes children to Ukrainian literary, music and cultural traditions, it also develops the little artists’ team spirit and creates a sense of accomplishment. Ms. Semenko said she has seen some timid children develop into great public speakers and community leaders. For this reason, instructors Khrystyna Pikh and Olga Fediv make sure that every child out of the 26 current Dzherelo members has a speaking role in each production.

Newly arrived immigrant children often find their first Ukrainian-speaking friends at Dzherelo, and it’s an extracurricular activity that their parents can actually afford, thanks to the generous sponsorship by the UWO.

The highlight of the year for all little Ukrainians is a visit by St. Nicholas. This year’s anniversary production was held in conjunction with the St. Nicholas celebration, which saw a very generous and patient St. Nicholas give out gifts to all children, artists and audience members alike.

The opening act of the 25th anniversary celebration was the Ukrainian female folk singers’ ensemble Ruta, comprising Dzherelo alumni and current high-school and university students. Their beautiful singing helped beat the pre-show jitters of the little artists performing “Once Upon a Dog,” a well-known Ukrainian folktale that found international acclaim as an award-winning 1982 animated film. The plot centers on an old incapable guard dog who is banned from home and ends up in a forest, face-to-face with his old enemy, the wolf. The two are able to put aside their differences and stage a baby kidnapping that guarantees the dog’s return to his family, hailed as a hero. The wolf’s reward is a place at the lavish Ukrainian wedding table (or rather under it, to not scare off the guests). The play highlighted the value of true friendship and the importance of collaboration in face of obstacles.

After their well-deserved Christmas break, Dzherelo artists and instructors will be back doing just that – fostering their friendships while collaborating on another theater production.