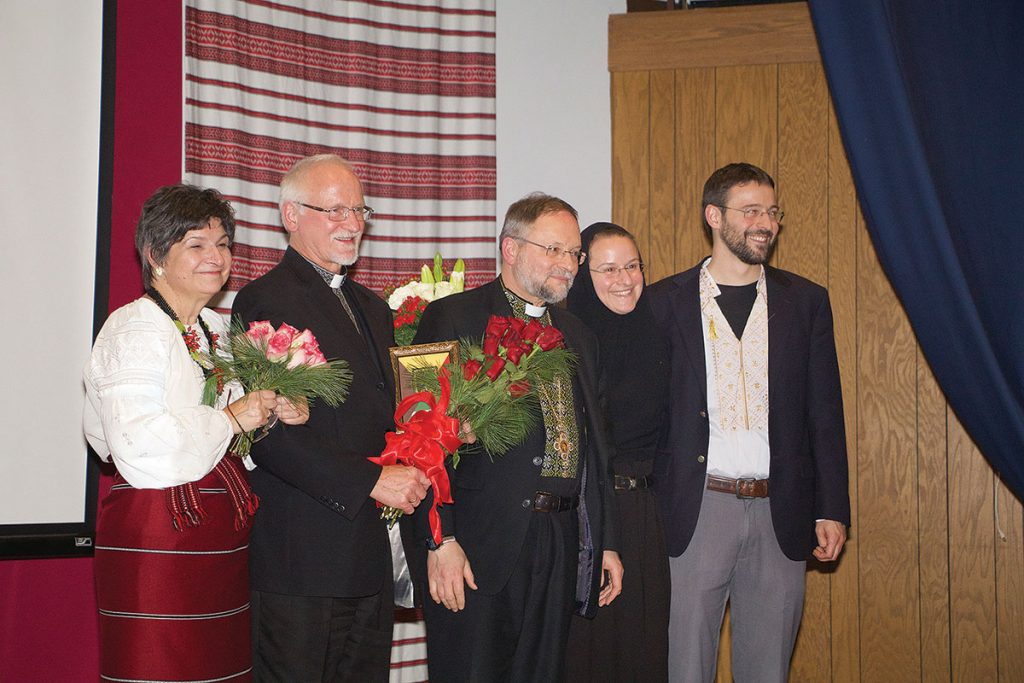 TRENTON, N.J. – Over 300 celebrants packed the church hall at St. Josaphat’s Ukrainian Catholic Church in Trenton, N.J., on December 6, 2017. The large turnout was in response to an invitation to honor and celebrate the 40th anniversary into priesthood of the pastor and NJ Dean the Very Rev. Protopresbyter Taras Lonchyna, and his brother, Bishop Hlib Lonchyna of the Ukrainian Catholic Eparchy of the Holy Family of London. It was also the 40th wedding anniversary of Father Taras and Jaroslava (Lala) Lonchyna.

The celebratory mass was attended by Bishop John Bura, auxiliary bishop of the Philadelphia Archeparchy, and Bishop Basil Losten, bishop emeritus of the Ukrainian Eparchy of Stamford, Conn., and 13 priests.

The service was followed by a reception prepared by St. Josaphat’s Sisterhood, and dinner was catered by Passage Restaurant of Philadelphia. Roman Juzeniw did an excellent job as master of ceremonies. The congratulatory program opened with the St Josaphat’s Parish Choir, directed by Roman Kucharsky, singing “Our Father,” and the blessing was given by Bishop John.

The toast was given by the Rev. Oleksander Dumenko, pastor of Holy Trinity Church in Silver Spring, Md., and Annunciation Church in Manassas, Va.

Greetings and an honorary certificate were given by the Pobratymy fraternity of Plast Ukrainian Scouting Organization (with members present from Philadelphia and Chicago), Oleh Rydzanycz, head of the Ukrainian Cultural Home of Trenton and Marta Kuzmowycz, chief executive officer of the World Plast Executive, who presented Father Taras with the badge for his achievement as the first Plast eagle scout in America in 1969. Additional greetings from friends and clergy were read.

To thunderous applause, Bishop Hlib, Father Taras and his family were invited to the stage, where they were offered congratulations and warm remarks, and presented with gifts: the presenters were Lesya Kindiy and Volodar Lysko from St. Josaphat’s Parish Council and St. Josaphat’s Sisterhood, and parishioner Oksana Lupak.

Bishop Hlib and Father Taras thanked everyone for making this day such a joyous occasion.

The celebration was enthusiastic, family-oriented, and visibly enjoyed by all.