“Scratches on a Prison Wall” presented at Carpe Diem Club 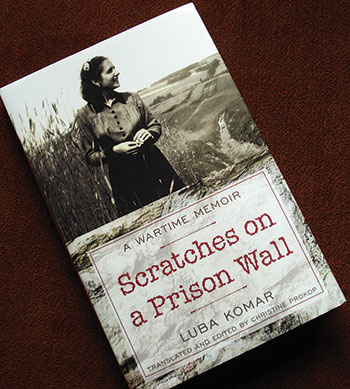 WHIPPANY, N.J. – The Carpe Diem Club of the Ukrainian American Cultural Center of New Jersey sponsored a book presentation of “Scratches on a Prison Wall,” a World War II memoir written by Luba Komar, edited and translated into English by Christine Prokop, at a special evening meeting on October 26, 2017.

“Scratches on a Prison Wall” is a fascinating first-person account of Ms. Komar’s arrest and brutal torture by the NKVD, the Soviet secret police, in 1940. At that time Ms. Komar was a 21-year-old student activist and member of the underground Organization of Ukrainian Nationalists (OUN). First sentenced to death for treason, which was commuted to 10 years’ hard labor and five years of exile in Siberia, Ms. Komar was able to escape when a fire erupted in the prison where she was detained during transport to Siberia.

The multi-media program narrated by Ms. Prokop, a daughter of Ms. Komar, was very effective in bringing out the intensity of the author’s experiences to the attentive audience. The first segment of the evening was a video clip of an interview with Ms. Komar conducted by Yurij Luhovy in 2000. It was most compelling to hear the author herself relate the harrowing story of her imprisonment and interrogation. Her dispassionate and almost clinical tone only underscored the life-and-death dangers that she encountered while still a very young woman.

A second video featured Dr. Alexander Motyl, professor of political science at Rutgers University, who highlighted the high quality of the English translation by the author’s daughter Christine Prokop, which captured the essence of the original Ukrainian words while making the memoir flow in page-turning English.

The most absorbing part of the evening came when Lydia Prokop read excerpts from the book. In the first selection the author’s voice was very immediate as she described how she was arrested, along with other students, and viciously interrogated by the secret police. A second passage detailed the chilling conversations among the young female detainees about how best to face the firing squad and what last words they should say before their execution. Ms. Prokop, an excellent reader, was able to vividly convey her mother’s fear of being betrayed by members of her own underground network when she returned as a courier after her escape.

The captivated audience participated in a lively discussion after the formal presentation. There was unanimous agreement that “Scratches,” with its very readable English translation, was an excellent vehicle to disseminate this little-understood period of Ukrainian history to a broader, especially non-Ukrainian, public. Various suggestions were made, such as donating the memoir to public and academic libraries, and including the memoir in book club readings. Another strategy would be to interest educators, from middle school to university levels, in the historical value of the book.

Ms. Prokop applauded all the suggestions, and while she is available for additional book presentations, she suggested that a wider grassroots effort from the Ukrainian community could be very effective in propagating a better understanding of the complexity of events in Ukraine during World War II.

“Scratches on a Prison Wall” can be obtained at Amazon.com. Ms Prokop can be reached at  lprokop101@aol.com.