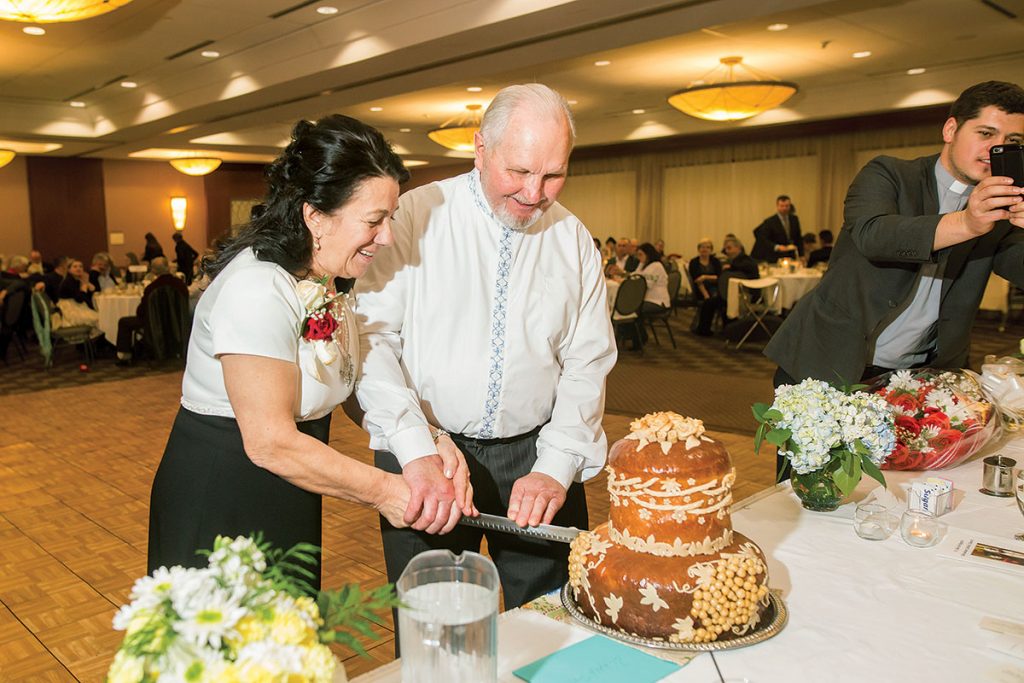 SYRACUSE, N.Y. – The local Ukrainian Catholic community came together to celebrate a trifecta of joyful events on Friday, November 17, 2017.

The Very Rev. Mitred Archpriest Volodymyr Piso was honored for his 45 years of faithful service in the priesthood (which includes 20 years in the Stamford Eparchy and almost eights years at St. John the Baptist Ukrainian Catholic Church in Syracuse after ordination as a priest in Ukraine in 1973). He was also recognized by the parish on the occasion of his 75th birthday. The Rev. Mykhaylo Dosyak, pastor of St. John the Baptist Ukrainian Catholic Church, not only inspired and orchestrated the celebrations of both the retirement and birthday of Father Piso, but also enjoyed recognition of his own birthday and 20 years of faithful service as a priest.

The formal celebrations began at 4 p.m. in the church, with a presentation of special gifts: the miter, which was a gift from the priests of the deanery, new blessed vestments from St. John the Baptist Ukrainian Catholic Parish, and a Ukrainian hand-decorated cross, which was a gift from Andy and Ted Melnyk, in memory of their parents, the late Oksana and Theodor Melnyk.

At the Holiday Inn not far from the church, almost 200 parishioners, family members, community dignitaries and friends joined the clergy and family members of Father Piso to reflect upon and celebrate a life well lived and to express gratitude well deserved.

This sold-out event was led by masters of ceremonies Dr. George and Roma Temnycky, in both Ukrainian and English. Many members of Father Piso’s family were introduced, and the pride and love felt both by Father Volodymyr and his wife, Nadia, was tangible. Children and grandchildren included: son, Volodymyr, and his wife, Nadiya, with their two children, Yaroslav and Viktoriya; daughter Nataliya, her husband, Petro Trut, and their children, Volodymyr and Nazar; and son Yaroslav, his wife, Nataliia Bosa, and their children, Daniel and Alexander.

Father Piso and his wife provided a special musical performance for the appreciative audience. Performances of the Odesa Ukrainian Dance Troupe were enthusiastically received by all.

After the convocation and dinner, Father Piso was presented with a specially baked “korovai,” a blessed ritual bread traditionally made for Ukrainian weddings, but always recognized as a celebration of life. The korovai was cut and distributed to all in recognition of the honoree’s sacrifice and success as a priest in our church.

Individual tributes were taken from both the podium and the floor. All in the hall expressed appreciation and respect for the history and years of service of Father Piso.