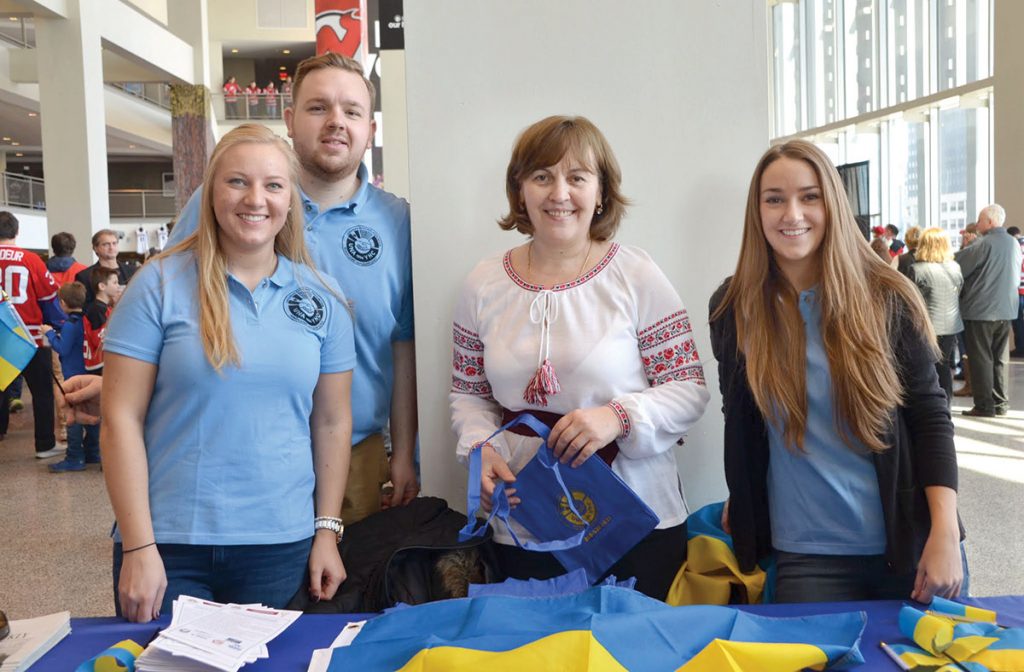 Chris Bytz
The Ukrainian National Association and its two newspapers were major partners of the Ukrainian Heritage Day held on March 19 at the Prudential Center during a National Hockey League game between the home team, the New Jersey Devils, and the visiting Columbus Blue Jackets. Seen at the UNA information are: (from left) Ola Bihuniak, UNA National Secretary Yuriy Symczyk, Maria Drich and Tanya Bihuniak.

On February 22, the Ukrainian National Association celebrated the 123rd anniversary of its founding back in 1894, when its first convention was held in Shamokin, Pa. It was there that 10 brotherhoods with a total membership of 439 people and assets of $220 resolved to form a fraternal association as had been suggested by an editorial published in the Ukrainian-language newspaper Svoboda on November 1, 1893. Today the UNA continues to live up to its founding principles, succinctly described in its mission statement: “In accordance with its charter, the Ukrainian National Association exists: to promote the principles of fraternalism; to preserve the Ukrainian, Ukrainian American and Ukrainian Canadian heritage and culture; and to provide quality financial services and products to its members.”

The Ukrainian Weekly reminded readers that by joining the UNA (that is, by purchasing an insurance policy or an annuity), members support the continuation of many worthwhile programs, including the publication of two weekly newspapers, Svoboda (in Ukrainian) and this newspaper. “And that’s what separates a fraternal organization like the UNA from a commercial insurance company. As the UNA’s mission statement underlines: ‘As a fraternal insurance society, the Ukrainian National Association reinvests its earnings for the benefit of its members and the Ukrainian community,’ ” our February 19 editorial pointed out.

Speaking of membership, the UNA Organizing Report for 2016 was published on July 16. Prepared by new UNA National Secretary Yuriy Symczyk, it included various membership initiatives that were undertaken during the tenure of his predecessor Christine Kozak (who passed away on June 27, 2016). Among the highlights of the report was praise for UNA Advisor Lubov Streletsky, who is also secretary of UNA Branch 10 and chairs the Philadelphia District Committee. Ms. Streletsky was deemed the champion of the “Club of UNA Builders,” having enrolled 17 new members for life insurance coverage totaling $865,500. Other top organizers were Eugene Serba of Branch 173, a UNA auditor, and George Fedorijczuk of Branch 162. Ms. Symczyk also cited the work of the three district committees that brought in the most new members: Philadelphia (31 members), New Jersey (29 members) and Chicago (16 members).

The UNA continued its community outreach program in 2107. “The World of Garlic,” a presentation by Roman Osadca, was hosted by the UNA’s New Jersey District Committee at St. Nicholas Ukrainian Catholic Parish in Passaic, N.J., on March 5. Besides learning about the health benefits of garlic, attendees learned about the UNA and the benefits of membership in our community’s oldest and largest fraternal association.

Also that month, the UNA supported Ukrainian Heritage Day at the New Jersey Devils hockey game at the Prudential Center in Newark, N.J., on March 19. The UNA information table had booklets about the UNA’s offerings, and copies of Svoboda and The Ukrainian Weekly. Ukrainian flags were distributed to all interested.

On April 22, the spring meeting of the UNA’s Connecticut District Committee was preceded by a presentation by Dr. Petrusia G. Kotlar on “Wellness and Nutrition as a Means to Healthy Longevity” that was open to the public.

There were other examples of community outreach.  In Los Angeles on April 2, during the annual Pysanka Festival, Zoryana Keske, secretary of UNA Branch 257, and Luba Poniatyszyn-Keske, UNA adviser and president of the branch, hosted a UNA table that provided information about the UNA, its two newspapers, and Soyuzivka Heritage Center. In addition, UNA coloring books and miniature maps of Ukraine with historical information were handed out. Meanwhile, in New Haven, Conn., on April 9, UNA Branch 414 hosted its 14th annual Easter Egg Hunt on the grounds of St. Michael Ukrainian Catholic Church. The event was coordinated by Gloria Horbaty, a UNA advisor and financial secretary of the local branch, and her husband, Donald, who is treasurer of Branch 414.

On May 18, the Home Office of the UNA celebrated International Vyshyvanka Day as staff came dressed in Ukrainian embroidered finery on a day aimed as expressing the unity of Ukrainians worldwide.

As always, the UNA during 2017 demonstrated care for its members of all ages. Seniors of the Ukrainian National Association and friends enjoyed a special week at Soyuzivka Heritage Center from Sunday, June 11, through Friday, June 16. UNA members who are attending college in the United States and Canada received scholarships for the 2017-2018 academic year. The 42 scholarship recipients were featured in a special section of The Weekly published on September 3, published just in time for the Labor Day weekend festivities at Soyuzivka, which are attended by many young people, and as the fall semester was getting under way. Over $11,000 in scholarship aid was distributed in 2017.

The year 2017 was a pre-convention year for the UNA, and the last pre-convention meeting of the UNA General Assembly was convened on November 17-18 at Soyuzivka. The meeting’s business sessions were marked by good news about the UNA’s continued progress, as for the fifth straight year the fraternal organization enjoyed net profits. Reports on the UNA’s finances and activity were delivered by the full-time executive officers of the UNA, President Stefan Kaczaraj, National Secretary Symczyk and Treasurer Roma Lisovich. All other General Assembly members – executive officers, advisors and auditors – as well as the editor-in-chief of the UNA’s official publications, Svoboda and The Ukrainian Weekly, had the opportunity to deliver addenda to their written reports.

Mr. Kaczaraj underscored that the state of the UNA is strong as its surplus has been consistently going up for the past four years. In 2017, he said, the surplus grew by $850,000 as of September 30; it was anticipated that the surplus would grow by $1 million by the end of the year. National Secretary Symczyk noted that the UNA had visited more districts in 2017 than in recent years – even those that were previously inactive. Mr. Symczyk cited the “very positive responses we’ve received from communities visited” and the eagerness of people to become involved and sell UNA products. Treasurer Lisovich stated that the UNA’s biggest accomplishment of the year was reaching $10 million in surplus. Other highlights of the “solid financial performance” noted by this executive officer were: five consecutive years of net profit of $1 million annually; total net admitted assets of $186 million; expenses that were below projections; and a strong investment portfolio.

General Assembly members also heard a presentation by Advisor Andrij Szul, a lawyer, who updated them on the corporate governance structure that is to be implemented by the UNA. He provided details on the General Assembly that, if the proposed by-laws changes are enacted, would be composed of a Corporate Board of Directors, an Audit Committee and a Fraternal Advisory Board.

There was news also about the Ukrainian National Foundation (an affiliated company that performs charitable activities on behalf of the UNA).

The UNF continuously provides grants enabling less fortunate students in Ukraine – those who come from needy families, are orphaned, or have been displaced by the war in Ukraine’s east – to pursue university studies at the National University of Ostroh Academy. One of the students who received such assistance from the U.S.-based foundation was Olha Klymchuk of Ostroh, Rivne Oblast, who is studying toward a bachelor’s degree in psychology. The third-year student recently expressed her thanks in a letter she sent in 2017 to the UNF’s president, Mr. Kaczaraj. “I, along with my parents, express sincere thanks to you for the assistance given me, an invalid since childhood, to enable me to fulfill my most heartfelt dream: to receive an education in my chosen specialty,” she wrote. Thank-you letters were received also from 15 students who hail from Rivne Oblast; six from Khmelnytsky Oblast; and one each from the Volyn, Lviv, Ternopil and Zhytomyr oblasts.

The UNF’s Soyuzivka Heritage Center held its 11th annual Ukrainian Cultural Festival on July 14-16.Thousands of guests, hailing from venues as diverse as California and Ukraine, came for the festival, whose headliners were the a capella group Pikkardiyska Tertsiya, the rock band Kozak System and vocalist Oksana Mukha from Ukraine, the women’s vocal ensemble Lanka Halychanka of Connecticut and the Roma Pryma Bohachevsky Ukrainian Dance Workshop. Other performers during the course of the weekend were the Ukrainian folk band Hurt Udech, violinist Vasyl Popadiuk (who also served as emcee with Lydia Kulbida), and singers Ruslan (he uses only his first name) and Hanna Daczko. Also featured that weekend were: a film festival; workshops in folk crafts and Ukrainian singing at the Ukrainian Village; vendors’ and food courts; a varenyky-eating contest; and dances to the music of the Zabava Band.

A Friday evening fund-raising gala, “Retro Lviv,” attracted nearly 160 people. Held under a decorated tent on the Lviv lawn, the event included a cocktail hour reception, a four-course meal and a performance by some of the headlining acts. It was sponsored by the UNF with proceeds going directly toward a career center for soldiers in Ukraine. The charitable partner of the 2017 gala was the International Alliance for Fraternal Assistance, a respected and highly awarded Kyiv-based NGO. Viktoria Voronovych, assisted by her husband, Roman Woronowycz, spoke about the work of the IAFA, including its latest focus on establishing a career center to help Ukraine’s soldiers returning from the frontlines. The evening gala transported guests to the 1930s and 1940s, and featured a gourmet dinner of old Lviv cuisine, including Lviv’s famous coffee, prepared by Chef Andrey Sonevytsky and his staff .

Later in the summer, the annual Miss Soyuzivka contest, sponsored by the Ukrainian National Association, was held on August 12. Ukrainian-born Isabella White was crowned as the new Miss Soyuzivka for 2018. The daughter of Sherry and Morgan White of Mainesburg, Pa., she was adopted at the age of 13 from Odesa, Ukraine. The first runner-up was Natalia Muzyka of Kerhonkson, N.Y., and Andrea Wasylyk of Cottekill, N.Y., was the second runner-up.

At the end of the year, scouts from the Kerhonkson branch of Plast Ukrainian Scouting Organizations shared with readers of The Ukrainian Weekly the story of how they had cleaned up and blazed trails at Soyuzivka Heritage Center during the spring. Led by scoutmasters Roman Hrab Sr., Roman Wasylyk and Nadia Maczaj, the team included Roman Hrab Jr., Vera Hrab, Julianna Maczaj and Pavlo Mysak, all members of the Plast scout patrol named Pumas. To complete the project, the scouts designed and installed trailhead signs for each of the five trails.

“Since completing our project, we have heard that visitors have enjoyed the newly marked trails. We are proud to know that our work has been noticed and appreciated. We plan to keep up on maintenance of the trails and to add more trail blazes in the spring of 2018 where needed,” the Plast scouts wrote.