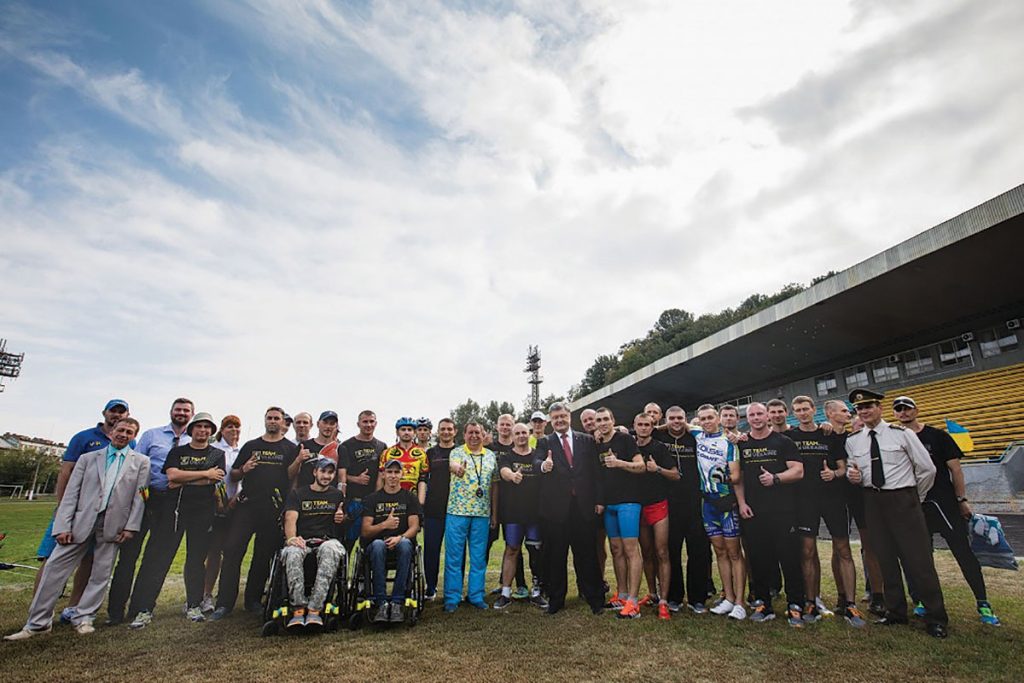 Presidential Administration of Ukraine
President Petro Poroshenko on September 12 with Ukrainian military veterans and soldiers who were training for the third Invictus Games to be held in Toronto on September 23-30.

It started with the National Hockey League’s introduction of its 100 greatest players in honoring 100 years of NHL hockey in 2017. Six Ukrainian hockey stars were included among these top 100 players: Wayne Gretzky, Mike Bossy, Johnny Bucyk, Terry Sawchuk, Johnny Bower and Turk Broda – all prominently featured on the pages of The Ukrainian Weekly. (Interesting to note that three of the six are goaltenders.)

It continued with the professional boxing exploits of ex-Ukrainian Olympic medalists Taras Shelestyuk (16-0, 10KOs), Oleksandr Gvozdyk (14-0, 12 KOs) and Vasyl Lomachenko (10-1, 8 KOs). The first two remain undefeated, while Lomachenko’s name is constantly mentioned atop the latest list of best pound-for-pound fighters in the world since the retirement of Andre Ward.

The future was on display at the third annual Invictus Games, held in Toronto in late September, when Team Ukraine debuted by winning an amazing 14 medals, including eight gold. A squad of only 15 athletes competed in only five of 11 adaptive sports as first-time participants, laying a solid foundation for the coming years.

The past year also witnessed a young tennis player’s career skyrocket upward and an aging champion boxer’s resume come to a sudden conclusion. Elina Svitolina won five WTA tour titles, flying up the women’s rankings to No. 4. Svitolina’s success on the tour is only scratching the surface, be it grass or clay. Forty-one-year-old Wladimir Klitschko retired from the fight game after two unprecedented title runs came to an end with consecutive defeats in the ring. Fortunately the sport will continue to be well represented by Ukrainians in almost every weight class.

• Rookie of the Year – Khrystyna Pohranychna;

• Coach of the Year – Lesya Shah (archery, Invictus Games); and

Next: the year’s highlight package of outstanding achievements and top performances from all sports competitions (alphabetized), plus newsworthy headlines from around the world and our diaspora.

Kremenets, Ternopil Oblast was the site of the Ukrainian Little League Championships (players age 10-12) on May 28. Nine all-star teams competed with Rivne outlasting Kyiv Baseball School in the final game 7-5, advancing to the European Regional Championship in Poland. Visits to several cultural centers, skill competitions and a prize lottery were among the events organized by Basil Tarasko, district administrator for Ukraine Little League Baseball.

Yuliia Dzhima won gold in the women’s 7.5 km sprint at the European Biathlon Championship in Poland on January 25-29.

Three Ukrainians highlighted the first ever boxing card at MGM National Harbor in Oxon Hill, Maryland on April 8: Vasyl Lomachenko, Oleksandr Usyk and Oleksandr Gvozdyk were all victorious before a sell-out crowd with a heavy Ukrainian contingent waving blue-and-yellow national flags. Wladimir Klitschko was defeated by favorite Anthony Joshua with the IBF, IBO and WBA world titles on the line in an April 19 match at Wembley Stadium in London. The Ukrainian world champion and future Hall of Famer was dropped twice in the 11th round. August 3 was the official date of Wladimir Klitschko’s retirement from professional boxing following consecutive defeats at the hands of Tyson Fury and Anthony Joshua. Klitschko goes down as one of the most dominant heavyweight champions in boxing history. Junior lightweight world titleholder Vasyl Lomachenko toyed with challenger Miguel Marriaga, earning a seventh-round TKO in Los Angeles on August 5. Oleksandr Gvozdyk registered a sixth-round knockout of Craig Baker in Lincoln, Neb., on August 19, capturing the NABF and NABO light heavyweight titles. Middleweight Oleksandr Khyzhniak won his gold-medal bout against Ablikhan Amankul of Kazakhstan at the AIBA World Boxing Championships in Hamburg, Germany, on August 25-September 2. Khyzhniak won the 2017 European Boxing Championships in Kharkiv on June 16-24 and was named best boxer of the Hamburg tourney. Viktor Vykhryst (+91 kg) and Iurii Shestak (60 kg) were gold medal winners in Kharkiv, where Ukraine topped the medals table with six. Oleksandr Usyk retained his WBO cruiserweight title against IBO champ Marco Huck on September 9 in Berlin with a 10th round TKO. Vasyl Lomachenko TKO’d Guillermo Rigondeaux in six rounds at Madison Square Garden on December 9, making Rigondeaux the fourth consecutive opponent who quit on the arguably best pound-for-pound boxer in the game.

Tetiana Klimchenko won gold in the scratch race at the World Cup (cycling) in Los Angeles on February 24-26. Ukraine won 21 gold medals at the 2017 Summer Deaflympics in Samsun, Turkey on July 18-30, finishing in second place overall with 99 total medals.

Tyler Bozak has paid his dues in Toronto and has earned assistant captain status on a rebuilding Maple Leafs squad, serving as a mentor for youngsters like Austen Matthews and Mitch Marner. The Dauphin Kings (Manitoba Junior Hockey League) had a Ukrainian “vyshyvanka” motif for its team uniforms as part of its annual Ukrainian night on January 28. The town of Dauphin is 41 percent Ukrainian, and 25 percent of the population speaks Ukrainian. The “Great One,” Wayne Gretzky, was actually acquired from the Indianapolis Racers by the Edmonton Oilers as part of a high-stakes backgammon game between owners Nelson Skalbania and Peter Pocklington. Johnny Bower, the young man born as John Kishkan, propelled the Toronto Maple Leafs to four Stanley Cup championships, was an NHL All-Star five times and holds the club record for most community appearances by a Leafs alumnus. Bower was selected as one of the NHL’s top 100 players. Mike Bossy scored 573 goals and 1,126 points in only 752 regular season NHL games. He won four Stanley Cups and is the only player in league history to net Cup winning goals in consecutive years. No surprise he was tapped as one of the NHL’s top 100 players. Ukrainian Terry Sawchuk is still referred to as the “greatest goaltender ever” and rightfully earned his designation as one of the NHL’s top players. Former Edmonton Oilers player Dave Semenko passed away at age 59 on June 29. A two-time Stanley Cup winner, he was Gretzky’s body guard – a fierce competitor and fan favorite. Johnny Bucyk played 21 seasons in Boston, with 16 years of 20+ goals, 545 goals scored, two Lady Byng Trophies and seven All-Star Game appearances. The ultimate Bruin was still another of the Ukes in the NHL’s top 100. He spent his entire 13+ season NHL career with Toronto, winning five of eight Stanley Cup finals, twice earning the Vezina Trophy. In 101 playoff games, Turk Broda totaled 13 shutouts and compiled a 1.98 GAA. Yet another top 100 NHL player!

President Petro Poroshenko called for support of the Ukrainian national team participating in the 2017 Invictus Games in Toronto – a world competition for soldiers and veterans wounded in the line of duty. Team Ukraine’s roster included several wounded warriors from Russia’s invasion of eastern Ukraine. Team Ukraine was triumphant in its debut at the 2017 Invictus Games in Toronto on September 23-30, winning 14 medals, including eight golds. Ukrainian soldier Pavlo Budaevskiy won four gold medals in swimming, Oleh Zymnikov got the gold in athletics, Oleksandr Pysarenko in rowing, Vasyl Pushkevych in powerlifting and Roman Panchenko in archery. The team was limited to only 15 injured veterans, but they certainly made Ukraine proud and served as a definitive reminder of the Ukraine-Russia conflict. Team Ukraine reached the top of the podium in terms of the support and admiration they received from within and outside the Ukrainian Canadian community. The Ukrainian Canadian Congress hosted 28 athletes, organized opening and closing receptions, and helped raise $100,000 (Canadian) to provide needed assistance to active and former members of Ukraine’s Armed Forces and National Police. Both Ukrainian President Poroshenko and Canadian Prime Minister Justin Trudeau attended the UCC’s September 22 gala reception in Toronto on the eve of the games.

High jumper Vita Palamar had her 2008 bronze medal revoked by the International Olympic Committee after her sample tested positive for anabolic steroids.

Elina Svitolina topped Caroline Wozniacki 6-4, 6-2 to claim the 2017 Dubai Duty Free Tennis Championship on January 25. Svitolina defeated China’s Shuai Peng 6-3, 6-2 to win the Taian Open in Taipei City, Taiwan, on January 30-February 5. Alexander Dolgopolov won the Argentina Open in Buenos Aires on February 13-19, besting Japan’s Kei Nishikori in the final 7-6(4), 6-4. Elina Svitolina captured the BNP Paribas Istanbul Cup on April 24-30, defeating Elise Mertens in the final 6-2, 6-4. Svitolina won her fourth title of the year in Rome on May 20-21 after beating Simona Halep in the final 4-6, 7-5, 6-1. Her victories earned Svitolina a well-deserved slot in the top 10 women’s rankings heading into the 2017 French Open. Svitolina won the Rogers Cup in Toronto on August 13, climbing to the WTA’s No. 4 ranking with her fifth tour title of the season. Battling through exhaustion, she managed to overwhelm still another top-10 opponent, Wozniacki (again), 6-4, 6-0.

In diaspora sports news, the Edmonton U.A. Lions bested Toronto Kontakt, 6-5, to win the second annual Alexander Cup hockey tournament in Toronto on February 18-19, an event hosted by the Ukrainian Sports Federation of the U.S.A. and Canada (known by the Ukrainian-based acronym USCAK). The 63rd annual Carpathian Ski Club (KLK) ski races took place at Hunter Mountain on February 25 with skiers ranging in age from 6 to 75. Maya Stawnychy and Erko Palydowycz won trophies for fastest skiers.

The fourth annual Ukrainian Heritage Day happened on March 19 at Newark’s Prudential Center. Ukrainian dance groups performed throughout the afternoon with Ukrainians singing the national anthem, serving as color guards and riding the Zamboni. Lt. Col. Michael Hrycak was recognized as “Hero of the Game” by the host New Jersey Devils. The event is co-organized by Myron and Chris Bytz.

A roster of 16- and 17-year-old soccer players of Ukrainian descent from the U.S. and Canada played exhibition matches against Dynamo Kyiv farm teams in Kyiv on April 3-7. The technically and tactically superior Ukrainian side swept both matches by resounding scores of 10-0 and 3-0. The trip was made possible by the Shor family’s soccer school in Detroit, which has a connection with Dynamo Kyiv’s academy. A U.S.-based soccer club made up of Ukrainian American Youth Association members played in an international soccer tournament in Ivano-Frankivsk, Ukraine, on July 12-15. Four teams comprising players 16 and under competed in matches held in three stadiums. Karpaty of Kolomiya beat FC Kalush in the finals; the U.S. team lost its three games, scoring a total of five goals.

Father and son, Peter and Markian Fil, each won gold at the third World Mulimpia, held in Pyeong Chang, South Korea, in July. The Mulimpia is a martial arts open championship competition in taekwondo, hapkido, wushu and haidong gumdo.

The Ukrainian Sports Museum inducted its second Hall of Fame class in Whippany, N.J., on September 16. Among inductees present at the ceremony were Ottawa Senators owner Eugene Melnyk (keynote speaker), boxer Chuck Wepner (whose mother is Ukrainian), ex-Philadelphia Flyers Stanley Cup champion Orest Kindrachuk and Ukraine’s biathlon coach, Vasiliy Karlenko, who also represented the National Olympic Committee of Ukraine. The Weekly’s long-time sports correspondent, Ihor Stelmach, was inducted in the “builders” category and returned as the evening’s master of ceremonies. Former N.Y. Jets receiver Wayne Chrebet was presented his Ukrainian Sports Hall of Fame plaque by Myron Bytz and Teo Bodnar at a Jets meet and greet on January 28; he had been inducted in 2016.

Ukrainian Tania Prymak, from Goshen, N.Y., was pursuing an opportunity to represent the U.S. at the 2018 Winter Olympics in ski cross, where four skiers race each other down a course filled with bumps, turns, rolling hills and jumps. As of November, she was ranked the No. 1 female ski cross racer in the U.S. and No. 15 in the world.