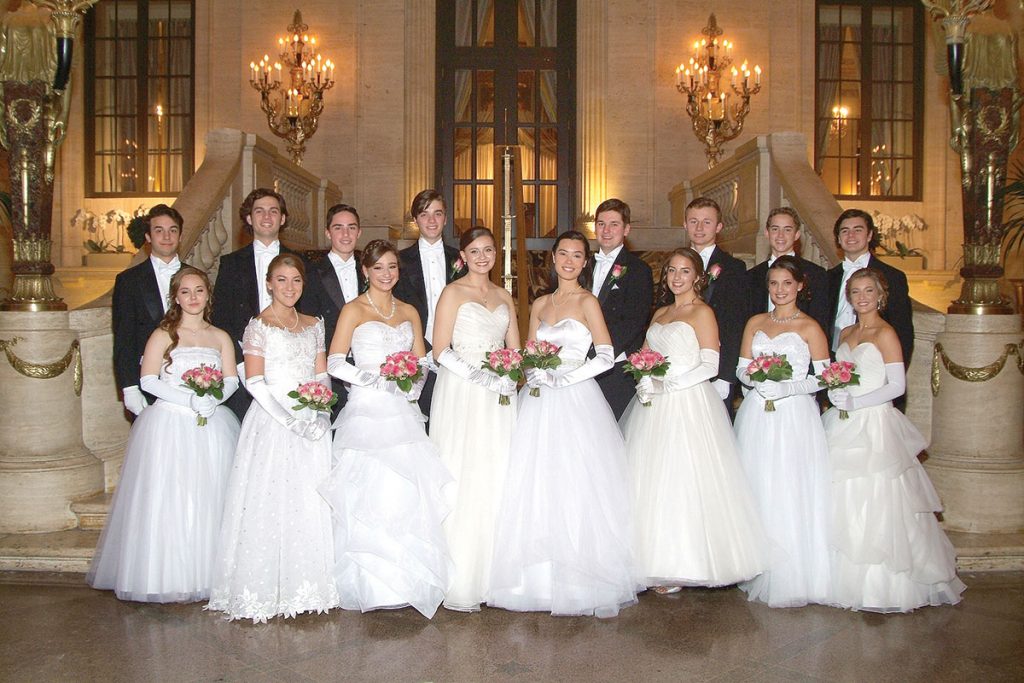 CHICAGO – The Illinois Branch of the Ukrainian Medical Association of North America (UMANA-Illinois) hosted the traditional annual Banquet and Charity Ball with Presentation of Debutantes on February 10 at Chicago’s historic Palmer House in the heart of the downtown “Loop” area. This year, despite the fact that Chicago was caught in the midst of a two-day snowstorm, many out-of-town guests traveled to attend this traditional event. Although some guests were unable to attend, luckily out-of-town debutantes and their escorts had arrived days earlier.

Planning and preparation for this annual event – first held in 1961 – began months ago, leading to a memorable and successful event for all. Back in November the debutantes attended a mother-daughter luncheon where they began planning the details of their debut.

The stunning ballroom was decorated with lighted centerpieces which appeared to reach for the lofty ceiling. Guests and friends greeted each other warmly throughout the cocktail hour. Over 420 participants were seated in the stunningly ornate and elegantly decorated ballroom awaiting the presentation of eight debutantes. Over 200 of their friends and family lined the balcony to view the presentation.

The debutantes, on the arms of their parents and family, opened the formal program with a grand entrance into the ballroom. Dr Myron Lewickyj, president of UMANA-Illinois, presented the eight accomplished, intelligent and beautiful debutantes to Chicago’s Ukrainian community. The debutantes bowed charmingly and gracefully as they were introduced along with their proud parents and escorts.

The debutantes were from the Illinois area, as well as from both coasts. The young ladies and their escorts had begun practicing their opening waltz months in advance. The resulting intricate and beautiful dance program, under the choreography of Roxana Dykyj-Pylypczak with help from Adriana Striltschuk-Karawan, showcased their creativity and expertise. In their flowing white gowns and holding their pink bouquets, the debutantes danced elegantly and effortlessly to the sounds of Strauss waltzes, first with their fathers and then with their escorts.

Dr. Lewickyj welcomed the debutantes, their parents, escorts and guests, who came from all over the United States and Canada for this charity ball. He thanked them for their continuing support and participation. Drs. Ulana Leskiw and Daria Pachovsky Wang, speaking on behalf of the proud parents, warmly addressed their daughters, the debutantes, wishing them well in their future endeavors both in their Ukrainian and American community lives. Each debutante then presented her mother with a rose in gratitude for her hard work and commitment.

Close to 230 guests, both young and old, arrived after dinner and danced the night away to the sounds of Chicago’s Klopit band. Later in the evening, the guests, debutantes and escorts all participated in the anticipated traditional folk dance, the “Kolomyika.” The debutantes were seen on the dance floor performing beautifully choreographed Ukrainian dance moves lasting close to an hour. The debutantes and their families celebrated well into the night amidst fine music and friends.

Traditionally, debutante balls help raise funds for charity. In November, months before the ball, a fund-raiser was held at Kendra Scott Jewelry with a percentage of sales being donated to the UMANA Foundation. The foundation has a strong commitment to medical education, and preserving the health of Ukrainians worldwide. In addition to the many projects that the UMANA Foundation supports, proceeds from this year’s ball will help supply children in the war-torn zones of Ukraine with school supplies to try to help them maintain a normal routine. This sense of normalcy reduces stress and may decrease potential psychological issues.

The 2018 organizing committee included many enthusiastic volunteers from the Chicago area, as well as visiting guests. Special thanks go out to Dr. Theresa Kuritza, chair of the Debutante Committee, Dr. Maria Hrycelak, assistant to the chair, and Liza Bandura, who created the beautiful centerpieces. Their dedicated efforts resulted in an imposing and enjoyable event for all involved.

All are invited to the next UMANA Illinois Debutante Ball on February 16, 2019.