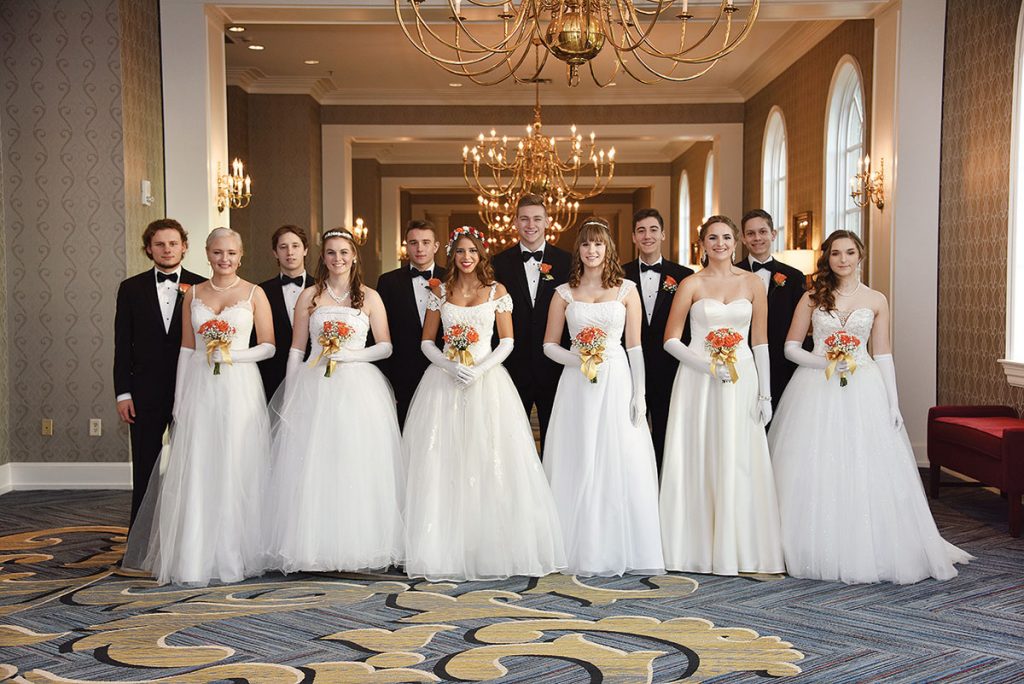 DEARBORN, Mich. – This year marks the 50th anniversary of the Debutante Ball hosted by the Detroit chapter of the Ukrainian Engineers’ Society of America (UESA). To commemorate this momentous occasion, the celebratory event was held on Saturday, January 27, in the Grand Ballroom of the historic Dearborn Inn Marriott situated on the spacious grounds of the Henry Ford Greenfield Village, in Dearborn, Mich.

Nearly a year in preparation, the celebrated event arrived with tremendous support from the local community and those who traveled long distances for the Jubilee. The evening began with guests gathered in the elegant foyer of the Dearborn Inn Marriott for cocktails and hors d’oeuvres, before being ushered into the expansive Grand Ballroom for the formal presentation of the debutantes.

Natalia Lewyckyj, president of the Detroit chapter of the UESA, had the privilege of welcoming the guests to this year’s celebratory 50th Debutante Ball and introducing the master of ceremonies for the evening, Marko Lawrin. In her opening remarks, Ms. Lewyckyj shared the incredible historic role the Detroit Winter Balls have had enriching the very fabric of the local Ukrainian-American community. These events have welcomed nearly 500 debutantes to the Ukrainian society in Detroit since the inaugural ball in 1959; many of them today are among its greatest organizational, business, and parish leaders.

The Winter Ball and presentation of debutantes continues to be a valuable opportunity to bring the community together and to show our youth that their role within the Ukrainian community is well recognized and warmly welcomed, she noted.

All attention was focused as the master of ceremonies formally introduced the debutantes to the community, sharing their highest academic achievements, remarkable artistic and athletic talents, and determined aspirations for the future. Each debutante, in a flowing white gown and elbow-length gloves, and holding an orange rose bouquet adorned with a gold ribbon symbolizing the 50th anniversary, made a grand entrance and was welcomed by guests as she was gracefully escorted through the center of the ballroom. As the proud parents and guests looked on, each debutante charmingly curtsied before the crowd, signifying her official debut.

Following the formal introductions, the debutantes graced the dance floor for the first waltz with their escorts. The elegant presentation, newly and beautifully choreographed by Dr. Christina Korduba Zachar, continued as the debutantes joined their fathers in a special waltz and presented their mothers with long-stemmed roses, an emotional expression of their sincere love and gratitude for all that they had done for them as they grew, and a bittersweet farewell of sorts as the debutantes prepare for independent adulthood and their futures away from home.

The formal presentation concluded with a joyous toast to the debutantes, greeted with resounding applause. Mr. Lawrin addressed the debutantes with a congratulatory message that underscored the importance of the debutantes realizing their boundless potential, assuming leadership roles in the Ukrainian community and always keeping the patriotic love for Ukraine alive in their hearts. Finally, the guests sang an emotionally charged rendition of “Mnohaya Lita” and the ceremonial acceptance of the debutantes into the community was sealed in history.

Since this year marked the 50th anniversary of the debutante ball hosted by the Detroit chapter of the Ukrainian Engineers’ Society of America, Dianna Korduba Sawicky and Ms. Lewyckyj, as ball co-chairs, took the opportunity to recognize those members and dedicated lifelong friends of the organization who had played such a vital role in the success of the ball over the span of five decades. Many of them were in attendance for this jubilee celebration. These members have played many roles, from longtime organization board members to integral ball committee members. These outstanding members were individually called out onto the dance floor, recognized for their incredible contributions and honored with a long-stem red rose or boutonniere. Once all the honorees were assembled, a resounding “Mnohaya Lita” filled the ballroom.

The anniversary celebration continued with a montage of photos from past debutante balls being projected on two large screens in the ballroom. In addition, framed group debutante photos of the past 50 years adorned the dinner tables and sparked unforgettable memories. To commemorate the historic event, a commemorative 50th anniversary group photo of past Detroit debutantes was taken.

The festivities continued after dinner, as guests were brought to their feet by the lively music of the Ukrainian band Klopit from Chicago. The dance floor was crowded up to the very end, serving as the showplace for all sorts of dances and incredible traditional Ukrainian dance acrobatics during the much-anticipated “Kolomyika.”