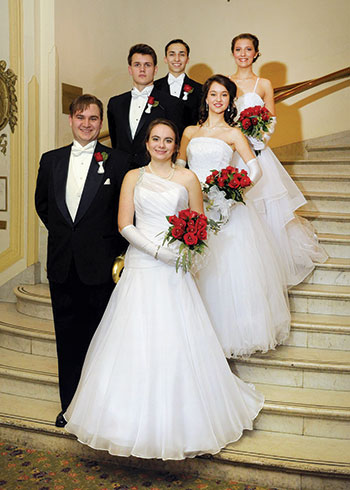 PHILADELPHIA – The 64th annual Engineers’ Banquet and Ball with presentation of debutantes, sponsored by the Ukrainian Engineers’ Society of America, Philadelphia Chapter, took place on Saturday, February 3, in the classically elegant Grand Ballroom of the Hyatt Hotel at the Bellevue, in Philadelphia.

This gala event was an exceptional success.

The Very Rev. Roman Pitula, representing Archbishop Stefan Soroka, metropolitan of Ukrainian Catholics in the U.S.A., opened the gala with a prayer for Ukraine and a blessing of the guests. Father Pitula’s daughter was one of the debutantes.

The debutantes and escorts were exceptionally well prepared by Halia Wirstiuk and Ania Bohachevsky Lonkevych to perform their presentation dances. They prepared original choreography to the music of Richard Strauss.

Masters of ceremonies for the banquet and ball were Sophia Zacharczuk and Paul Tershakovec.

An additional highlight of the evening was a special performance by the Voloshky School of Ukrainian Dance of Philadelphia.

The success of this Gala event was made possible by the preparation and hard work of the Ball Committee, chaired by Orysia Hewka.

Music was provided by the excellent Hrim Orchestra from New York and Connecticut.

Next year’s Philadelphia Engineers’ Ball is scheduled for February 2, 2019, at the same venue, which has been renamed The Bellevue Hotel.