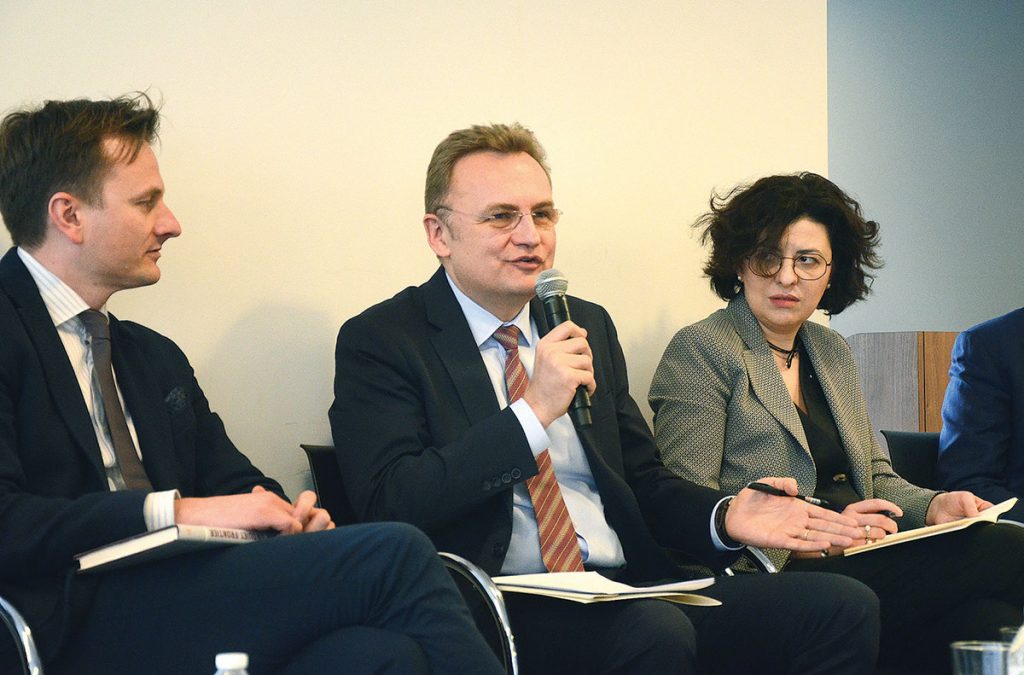 Yaro Bihun
Andriy Sadovyi (center), the founder and leader of Ukraine’s Samopomich political party and the mayor of Lviv, points out that his delegation’s talks in Washington focused the need for anti-corruption reforms in Ukraine. Sitting beside him during the post-visit summary discussion at the National Democratic Institute are the party’s leader in the Verkhovna Rada, Oleh Bereziuk, and the Rada’s deputy speaker, Oksana Syroid, also a party member.

WASHINGTON – A delegation of members of Samopomich (Self-Reliance), a growing influential minority political party in Ukraine, came to the United States in early March to promote their country’s needs and interests with representatives of the U.S. government, international organizations and interested U.S. political and Ukrainian institutions.

The visit began in New York City, where the Samopomich party’s founder and leader, Lviv Mayor Andriy Sadovyi, had a discussion at the Ukrainian Institute of America with representatives of the city’s Ukrainian community. He also met with the New York’s Mayor Bill de Blasio, reportedly discussing issues involving this country’s political support for Ukraine.

Mayor Sadovyi then traveled to Washington, where, along with his party’s deputy speaker in the Verkhovna Rada, Oksana Syroid, the party’s leader in the Rada, Oleh Bereziuk, and Rada member Serhiy Kiral, they held meetings with officials at the U.S. State Department, the International Monetary Fund, the National Democratic Institute and the International Republican Institute.

Commenting after his meeting with Assistant Secretary of State for European and Eurasian Affairs A. Wess Mitchell, Mr. Sadovyi noted that the message he heard was “very clear”: passing the anti-corruption court law was crucial, and that this will affect how the U.S. and the West will support Ukraine in the future.

While in Washington, the Samopomich delegation also held separate meetings on key U.S.-Ukrainian issues with the U.S. Special Representative for Ukrainian Negotiations Kurt Volker, Congressman David Price, representatives of the International Monetary Fund, the World Bank and the German Marshall Fund, as well as with Ukrainians who work at the IMF and World Bank.

The meaning and accomplishments of the Samopomich delegation’s U.S. visit and its work in Ukraine were summed up March 7, in a discussion at the National Democratic Institute in Washington, organized by NDI and IRI, two organizations that have worked with Ukraine over the past 25 years in helping it develop a democratic structure.

As the NDI director for Eurasia programs Laura Jewett pointed out in her introductory remarks: “Samopomich, in many ways, personifies the transition from protest to politics in Ukraine following the Revolution of Dignity. It’s also a party that is on the frontlines of developing a new model of political parties and politics in general, a model that is inclusive, that is citizen-focused, and that is focused on reforms.”

She noted that Samopomich also has a reputation for fighting corruption, and pointed out that the party started as a regional movement and now has a national reach – which is difficult to do in any country, especially in Ukraine.
In his summary, Mr. Sadovyi pointed out that the “priority in the talks was the need for anti-corruption reforms.”

Americans see there is a need to win in Ukraine’s war with Russia, he said, but added that “there is no way you can win this war without putting things to order inside the country and make sure Ukraine functions properly.”

He noted that 90 percent of Ukrainians want to see a completely independent anti-corruption court in the country – something that the oligarchs are against. And this is the last chance, he added. “Either we use it, or lose it.”

“And Samopomich will do all it can, everything possible to make sure that the rule of law comes to Ukraine eventually,” he stated.

Mr. Sadovyi also pointed out that Samopomich’s goal is to win the next national election, build a new government and become a reliable partner “with those who are willing to support us, and especially the United States.”

He also repeated the recommendation he expressed a few days earlier to Ukrainians in New York: that Ukrainians now living around the world with American, Canadian, British and other citizenships should also have the right to Ukrainian citizenships. Then, these 5 million to 7 million Ukrainians could influence the election process in Ukraine.

And that, he added, “would be in the national interest of the United States: to have a successful and democratic Ukraine.”