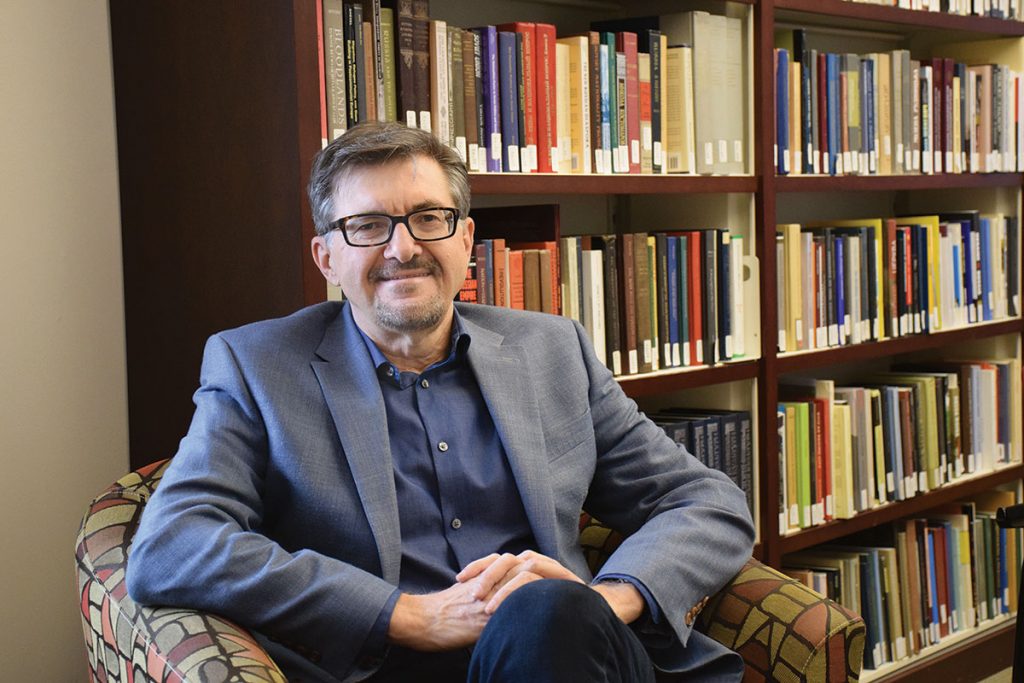 CAMBRIDGE, Mass. – Serhii Plokhii (Plokhy), Mykhailo S. Hrushevs’kyi Professor of Ukrainian History and director of the Ukrainian Research Institute at Harvard University, has won the Shevchenko National Prize for “The Gates of Europe: A History of Ukraine.” The Shevchenko Prize is Ukraine’s highest state award, making it one of the most prestigious distinctions a work of literature, non-fiction, or art can receive in Ukraine.

The Shevchenko National Prize, named after poet and artist Taras Shevchenko, was established on the centenary of the poet’s death in 1961. There are up to five prizes annually and works are nominated in specific categories by the Ministry of Culture and Tourism of Ukraine, the Ukrainian National Academy of Science, the Ukrainian Academy of Arts, Ukrainian artistic unions, and Ukrainian literary and art critic associations, as well as members of the Shevchenko Prize Committee.

Plokhii’s winning book, “The Gates of Europe,” was nominated in the “Literature, Non-Fiction, and Journalism” category. This year, the Committee decided to award separate prizes for fiction and non-fiction for the first time. As one of the few historians to be nominated for the Prize this year and one of the few historians to ever win, Plokhii is hopeful that this separate category will become the norm, paving the way for more works of non-fiction to be competitive for the Prize and creating greater equivalency between the Shevchenko Prize and prizes in the West, such as the Pulitzer.

Translated into Ukrainian, “The Gates of Europe” (Brama Evropi) was nominated for the Shevchenko Prize by a member of the Prize Committee, the editor of Vsesvit, a journal for translating works of other languages into Ukrainian. “The Gates of Europe” presents the authoritative history of Ukraine and its people from the time of Herodotus to the present crisis with Russia, providing unique insight into the origins of the most dangerous international crisis since the end of the Cold War. The book is directly related to the survey of Ukrainian History course Plokhii teaches at Harvard.

Written for a broad English audience in his readable style, the book was well-received in the West as a thorough, approachable history of Ukraine at a moment when the country was in the public eye but not very well-known to the general or academic Western public. Its Ukrainian translation was equally well-received in Ukraine, even though it was originally written for a foreign audience. Plokhii is encouraged by similar responses in Ukraine and the West, as it signifies the acceptance of a shared historical narrative and a common basis for critical discussions. “The Gates of Europe” is available in Turkish and has just been released in Russia (in Russian), soon to be joined by versions in Chinese, Romanian, and other languages. These translations provide global access to a shared narrative of Ukraine’s history, including the essential background for circumstances that exist today.

This year’s Shevchenko Prize process as a whole was a positive sign of Ukraine’s progress in the last few years. This was the first year without any real controversy over the nominees and winners, and that is largely due to changes in the composition of the Committee and a great increase in transparency. Plokhii said that the nominees were aware of their nomination, knew who was on the Committee, and were kept updated about the progression of nominees through the three stages of the competition. While Ukraine has struggled with how to handle the Soviet origin of the prize, it has taken steps to ensure it’s not a post-Soviet institution that carries Soviet procedures forward into today’s Ukraine.

The 2018 Shevchenko Prize, then, is a victory for Ukraine as well as the recipients. The full list of winners comprises:

The Shevchenko Prize will be awarded by President Poroshenko at a ceremony in early March. Plokhii’s next book is a history of Chornobyl, from the nuclear accident through its still-unfolding fallout. The volume will be available in May 2018.