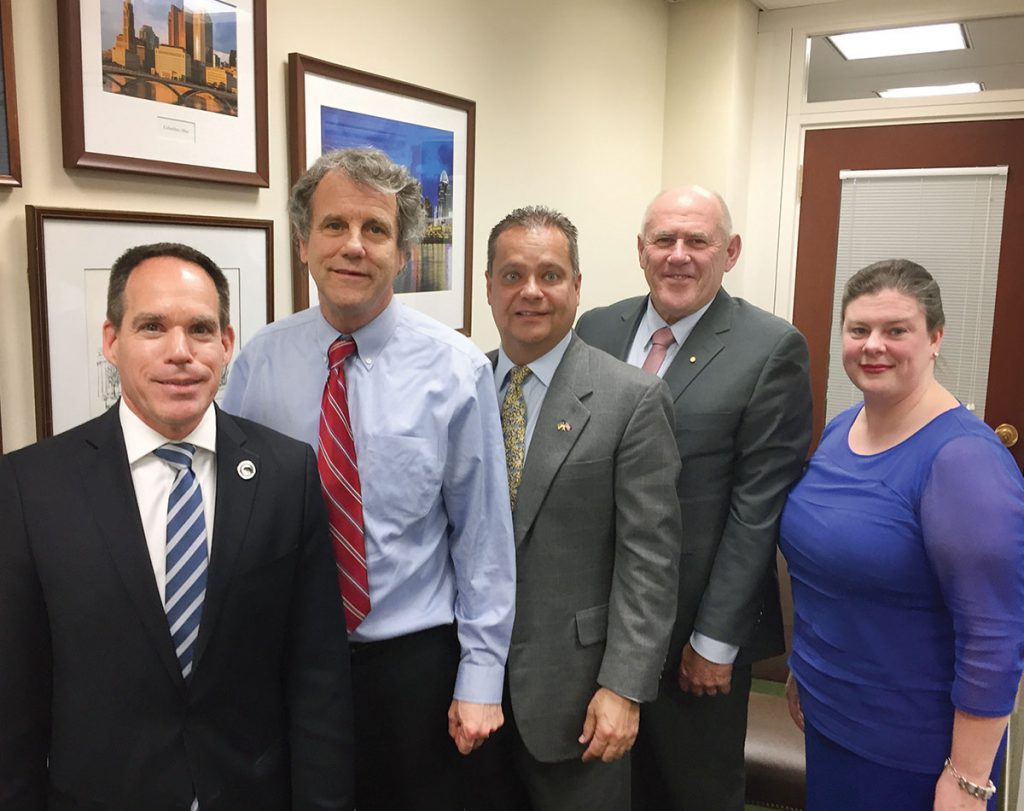 WASHINGTON – Since President Donald Trump signed into law the Countering America’s Adversaries Through Sanctions Acts (CAATSA) in August 2017, the Ukrainian Congress Committee of America (UCCA) and its Washington public affairs bureau, the Ukrainian National Information Service (UNIS), have been monitoring the implementation of the law. Within a framework of advocacy programs in 2017 to promote passage of the CAATSA bill that would sanction Russia for its invasion of Ukraine and interference in the U.S. elections, UNIS organized the first in what will most likely become a series of Ukrainian Days advocacy events on Capitol Hill on Tuesday and Wednesday, March 6-7.

The intent of Ukrainian Days is to promote the Ukrainian community’s contacts with its elected representatives in Washington. Nearly 50 community activists from throughout the United States participated in the two-day event, which began with a prayer service at the Holodomor Memorial in commemoration of the 85th anniversary of the Famine-Genocide. Ukrainian Days participants were joined by Bishop John Bura of the Ukrainian Catholic Church and the Rev. Robert Hitchens, pastor of Holy Family Ukrainian National Shrine in Washington, who offered a prayer for the repose of those who perished in the Holodomor. Ambassador Valeriy Chaly, Ukraine’s ambassador to the United States, and a delegation of Ukrainian members of Parliament (MP) also attended the ceremony.

In a symbolic gesture, representatives from Ukraine and communities throughout the United States placed sheaves of wheat at the Holodomor Memorial to recall the millions of lives lost in Ukraine in 1932-1933.

Following the ceremony, Ukrainian Days participants had the opportunity to attend a discussion at the Atlantic Council. The topic was the upcoming Russian elections, its effects on the Russian economy and subsequent pressures on countries in the region.

On Tuesday evening a reception at the Embassy of Ukraine was hosted by Ambassador Valeriy Chaly, who warmly welcomed the Ukrainian American community representatives and urged them to continue their advocacy of greater U.S.-Ukraine relations. Remarks and presentations were made by Andrew Futey, UCCA president, Michael Sawkiw, Jr., UNIS director, and several visiting MPs. Ambassador Chaly recognized several distinguished members of the Ukrainian community with certificates for their contribution to strengthening the community.

During the reception, the Friend of UNIS Award was presented to the Joint Baltic American National Committee (JBANC) for its staunch support of Ukraine throughout the Euro-Maidan – Revolution of Dignity – and the invasion of Ukraine by the Russian Federation. JBANC, along with the UCCA, is a member of the Central and East European Coalition which encompasses 18 national ethnic organizations that represent nearly 22 million Americans of Central and East European descent.

The Ukrainian Congress Committee of America was a founding member of the CEEC in 1994. Together, the CEEC and the UCCA have co-sponsored advocacy events in Washington and issued policy briefs that summarize issues the CEEC ardently advocates.

Karl Altau, JBANC managing director, accepted the Friend of UNIS Award and expressed gratitude for the recognition. He spoke of the cooperative efforts in Washington among the various ethnic communities and noted that the cause of Ukraine is a cause of principle for all freedom-loving nations. “Your struggle is our struggle,” Mr. Altau underscored.

A briefing session was held on Wednesday morning, March 7. Prior to hitting the corridors of Congress, participants were briefed on the latest information regarding the Russia-sanctions regime, an upcoming congressional resolution on the Holodomor, and a cybersecurity bill in the U.S. Senate.

Joining the advocacy event was Stefan Romaniw, general secretary of the Ukrainian World Congress. Mr. Romaniw was in Washington for the Ukraine Security Conference on March 8 and participated in the briefing session and meetings on Capitol Hill.

UNIS Director Sawkiw underscored: “These advocacy events provide our community an opportunity to develop a closer relationship with our friends in Congress. As this year is a mid-term election year in Congress, it is also important to remind the Ukrainian community to register to vote to be able to cast their ballot in primary and general elections. The greater the number of Ukrainian Americans voting, the more likely our issues of concerns will be raised on local, statewide and national levels. There are many important tasks that still lie ahead.”

Joining the Ukrainian American constituents were community leaders from the Central and East European Coalition, as well as activists for a democratic Russia. Also notable was the participation of the Youth Civics Group of the Ukrainian Heritage School in the Philadelphia metropolitan area. The group, consisting of high school students with an affinity for public service and civic-minded activism, attended various congressional offices during their meetings. Iryna Galaj and Eugene Luciw serve as the youth group’s mentors and have provided leadership and guidance in their civic activism.

In all of the advocacy meetings on Capitol Hill, the participants of Ukrainian Days presented members of Congress with various policy papers on issues of importance to the implementation of the Countering America’s Adversaries Through Sanctions Acts (CAATSA); the resolution in commemoration of the 85th anniversary of the Holodomor; and a cybersecurity cooperation bill between Ukraine and the United States, as well as informational brochures about the Ukrainian Congress Committee of America and the Ukrainian National Information Service.

The advocacy event concluded with a commemoration of the national bard of Ukraine, Taras Shevchenko. Ukrainian Days participants, along with Embassy of Ukraine staff and local Ukrainian Americans placed flowers at the base of the Shevchenko monument in Washington. A short prayer was also recited to honor the memory of Shevchenko. Ambassador Chaly provided a few remarks about the significance of Shevchenko’s writings, especially as they relate to today’s aggression by Russia.

Understanding that not everyone was able to attend the Ukrainian Days advocacy event in early March, UNIS is urging the Ukrainian American community members to make every effort to meet with their elected officials at their district offices. Copies of the policy papers presented at Ukrainian Days can be obtained at the Ukrainian National Information Service.