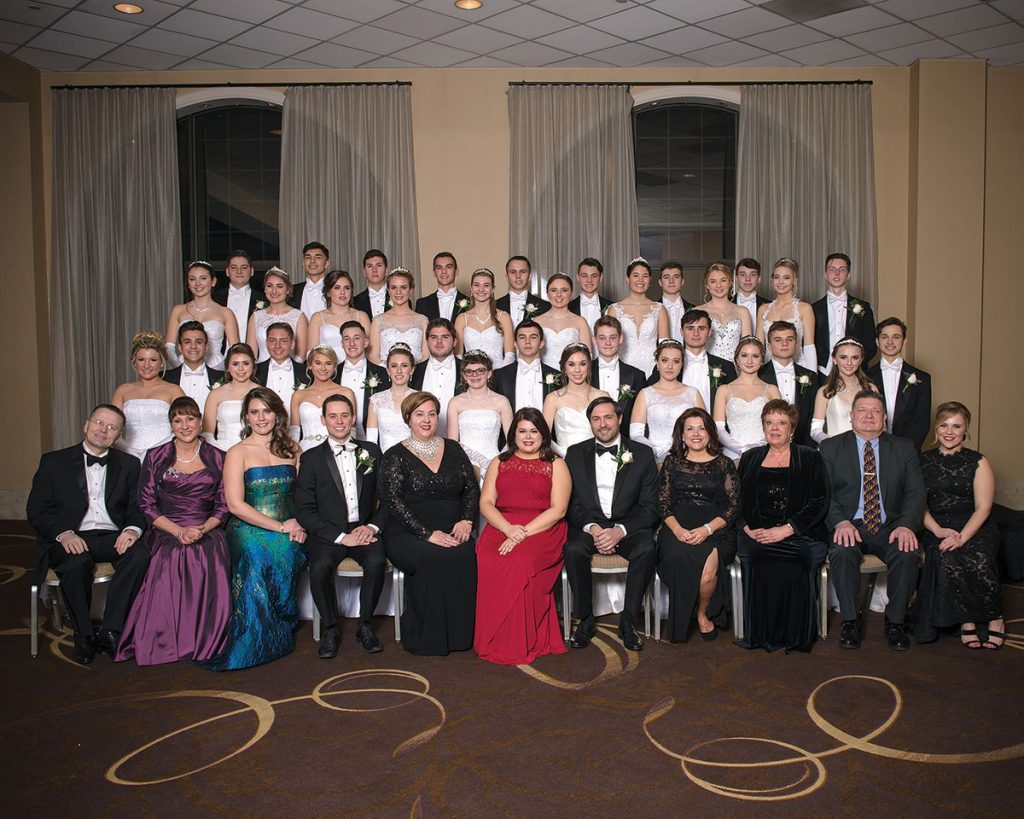 PARSIPPANY, N.J. – On Saturday, February 10, the Ukrainian American Youth Association (UAYA) held its 54th annual Debutante Ball at the Sheraton hotel in Parsippany, N.J. The ball marked the debut for 18 young women, who were celebrated in a ballroom full of family, friends, UAYA members and other guests.

The UAYA Debutante Ball, under the auspices of the National Executive board, is a longstanding tradition among UAYA members of the Northeast. The event has its roots in European court custom and was adopted in the mid-20th century by Ukrainian American diaspora organizations. This year’s debutantes joined the ranks of nearly 800 young women who have taken part in this rite of passage.

The evening began with a lively cocktail hour. After guests were seated in the ballroom, Natalka Horbachevsky, co-chair of the organizing committee, officially welcomed guests to the ballroom for the formal portion of the evening and introduced the master and mistress of ceremonies, Peter Kolinsky and Ulana Blahy. Mr. Kolinsky and Ms. Blahy are active members in the Hartford, Conn., and Yonkers, N.Y., branches of the UAYA, respectively, and had the distinct honor of presenting this year’s debutantes and their chosen escorts.

Dressed in flowing white ball gowns and crisp, elbow-length gloves, the girls walked through the sparkling lights of the ballroom to greet their parents at the center of the dance floor. Each debutante embraced her parents, received her bouquet and was met by her escort. From there, she and her escort circled the perimeter of the dance floor as the emcees shared her academic accolades, hobbies and involvement in the UAYA and Ukrainian American community. To conclude her presentation, the debutante took her inaugural curtsy.

After the presentation of the debutantes, Miss Semchuk read the dedication that is delivered every year to the ball’s attendees by a selected debutante. Following this, Adrian Dlaboha, in his first year as president of the UAYA National Executive Board, made his introductory remarks to the crowd. Speaking to the debutantes directly, Mr. Dlaboha congratulated them on their debut and encouraged their continued participation in UAYA activities and the Ukrainian American sphere.

To conclude the formal portion of the program, the debutantes and escorts performed a waltz choreographed by Hryhoriy Momot. Guests looked on as the debutantes were led around the floor by their escorts through lifts and spins in this magical choreography. After lengthy applause, the debutantes’ fathers took their daughters to dance, marking the end of their formal presentation.

Dinner began with a blessing led by Bishop Paul Chomnycky. As guests ate, two talented bands, New York’s Hrim and Montreal’s Zvook, kicked off the “zabava.” Their spectacular performance kept guests dancing all through the night. The rousing “Kolomyika,” as in years past, was one of the highlights of the night.

The UAYA Debutante Ball continues to be one of the highlights of the youth association’s calendar and an event many Ukrainians in the Northeast look forward to annually as a time to celebrate the new generation of UAYA members and catch up with old friends.

The committee acknowledged the support of the many volunteers whose efforts contributed to a wonderful evening, in particular the UAYA Executive Board and all the debutantes, escorts and parents who helped orchestrate this event.

The UAYA invites all to save the date for next year’s ball, which will take place on March 2, 2019.