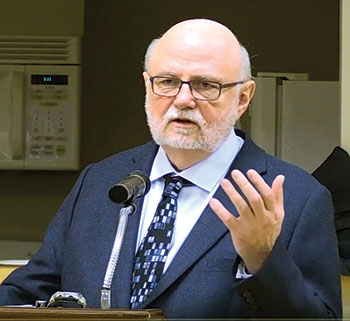 EDMONTON, Alberta – A large and enthusiastic crowd gathered on the evening of Wednesday, March 14, at St. John’s Cultural Centre, Edmonton, to hear Jars Balan give the 2018 Bohdan Bociurkiw Memorial Lecture on the topic “An Unorthodox History of the 1918 Founding of the Ukrainian (Greek) Orthodox Church in Canada.”

In his lively presentation, he drew on a wide range of sources, gathered over several decades of work on the social history of Ukrainians in Canada, to present an account of the founding of the Ukrainian Orthodox Church of Canada “from the bottom up.” He showed how ordinary people who had come to the Canadian prairies from Halychyna and Bukovyna looked to their faith to help them navigate the challenges and opportunities of the immigrant experience from the 1890s through to 1918.

In a wide-ranging talk, Mr. Balan sketched the “big picture” in which they found their way, including the influence of Russophilism in the Greek-Catholic Church, the encounter with the Russian Orthodox mission in Canada, tensions between Greek and Roman Catholics, and the impact of war, revolution and imperial collapse on religious life.

However, the speaker’s emphasis was on the parishioners, who sought religious services in their own language and in their own communities, and who, he argued, provided the impetus for the founding of a truly new religious formation, the Ukrainian (Greek) Orthodox Church in Canada.

The annual Bohdan Bociurkiw Memorial Lecture honors the memory of Prof. Bohdan Bociurkiw, an eminent political scientist and internationally renowned specialist in human rights, Soviet religious policy and the history of the Ukrainian Churches. Each year, the Program on Religion and Culture at the Canadian Institute of Ukrainian Studies brings to Edmonton a specialist working in the subject areas that preoccupied Prof. Bociurkiw throughout his career – religion and politics and Ukrainians.