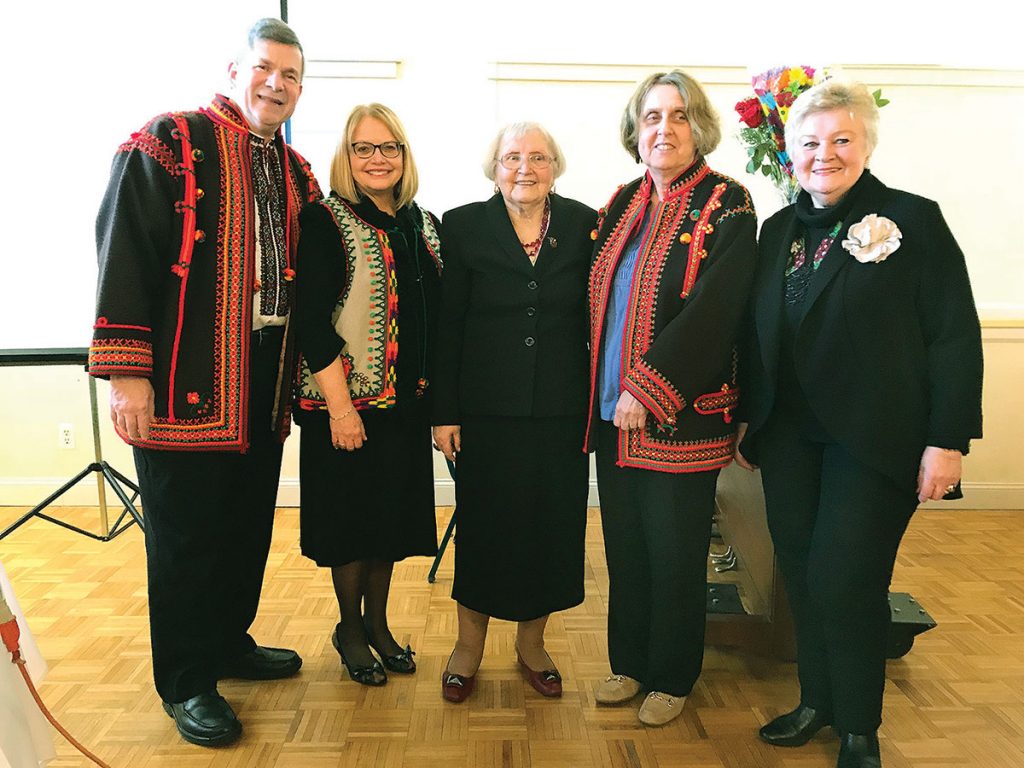 WARREN, Mich. – The Ukrainian National Women’s League of America, Detroit Regional Council, friends and family of Olena Kulchycka Papiz gathered enthusiastically to celebrate her 95th birthday and book presentation. The luncheon was attended by more than 100 admiring participants at the Ukrainian Cultural Center in Warren on Sunday, March 25.

Mrs. Papiz was born on March 22, 1923, in the village of Novosilka, county of Pidhaitsi, in western Ukraine. She married Vasyl Papiz of Stare Misto Pidhaitsi in 1941 (he passed away in 1990). They abandoned the land they loved to escape the Soviet army in 1944 and until 1949 made the DP camp of Regensburg their temporary home.

Her passion for Ukrainian culture and traditions, particularly embroidery, were greatly appreciated by the local members of the UNWLA. She joined Branch 63 and immediately organized exhibits of Ukrainian arts and crafts.

When she transferred to Branch 81, the ladies conceived a plan to create a collection of dolls that would depict national and historical personages in their particular costumes. Mrs. Papiz spearheaded this ambitious endeavor and held many exhibits in the United States and Canada, in schools, libraries and at various Ukrainian events, proudly featuring 64 lovely dolls, Ss. Volodymyr and Olga, regional characters and even members of Ukrainian Insurgent Army (UPA).

The birthday celebration also featured the presentation of Mrs. Papiz’s book of creative and artistic embroidery in color, “My Embroidery,” which encompasses merely a fraction of her life’s work. The festivities started with a small exhibit of her recent work prepared by her friend Maria Welychko, of UNWLA Branch 76. Ulana Ohar Kushner, a close relative of the
honoree, greeted her and all the guests, then called on Vera Andrushkiw, president of the UNWLA Detroit Regional Council, to preside over the program.

Ms. Andrushkiw relayed Mrs. Papiz’s very interesting biography and concluded by reading the tribute sent by Anna Krawchuk, honorary president of UNWLA and current chair of its scholarship program. She quoted: “Your scholarship foundation created in the name of your husband, Vasyl Papiz, surpassed $29,000 and awards orphans and worthy students in Ukraine.” Ms. Andrushkiw continued: “We are aware of additional grants to Ukrainian students and seminarians in Poland and Brazil. In particular, the book we are presenting here has been compiled by a recipient of your support, Dr. Lidia Stefanowska, lecturer at Warsaw University in Ukrainian studies, and author of ‘MUR and the Rebirth of Ukrainian Literary Life in DP Camps on the Territory of Germany, 1945-1948.’ ” Ms. Andrushkiw then invited guests to present greetings from various groups.

The visibly affected Mrs. Papiz then addressed all her gathered friends, thanking them for this great honor and including some humorous anecdotes. She mentioned the UNWLA members, or “Soyuzianky,” who assisted her in creating her past exhibits, Marie Zarycky, Oksana Ohar, the late Luba Fedorko, Nina Wasylkewych and Tamara Petraszczuk.

The program concluded with the solo presentation of two songs by local “nightingale” Tania Bedrus, educational chair of the UNWLA National Board, with accompaniment by Halyna Yalovenko. The Rev. Walter Rybicki, who offered the invocation, asked for God’s blessings on Mrs. Papiz and her fellow Soyuzianky, encouraging their further dedicated and innovative activities in the community.

The participants enthusiastically intoned “Mnohaya Lita” and then stayed to mingle and partake of wine and the delicious tortes created by the skillful Ms. Ohar.