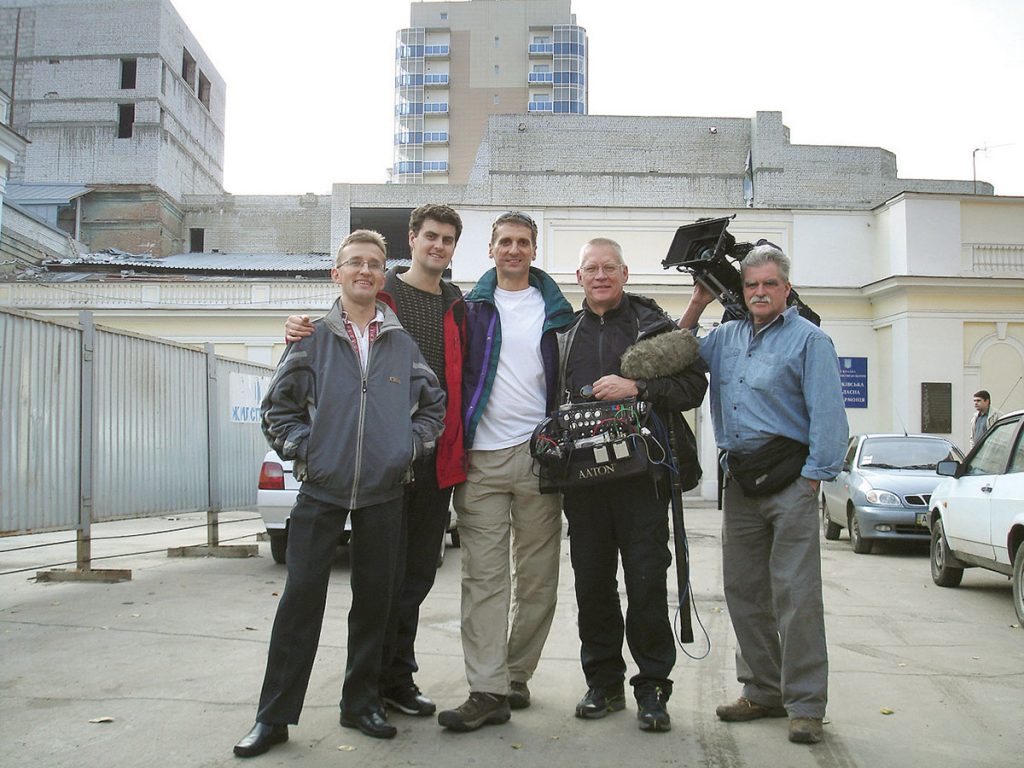 Courtesy of Orest Sushko
On location in Kharkiv during the filming of “The Music of Survival” (from left) are: Kostyantyn Cheremsky, Volodymyr Voyt Jr., Orest Sushko, Ao Loo and Michael Ellis.

PITTSBURGH – The film “Music of Survival” (“Brave Seventeen” in Ukrainian) was premiered in Pittsburgh on Sunday, March 18, to an enthusiastic audience filling the hall of the Ukrainian American Citizens Club of Carnegie, Pa. Producer, director and storyteller Orest Sushko, whose father, Makar Sushko, was the first Canadian member of the Ukrainian Bandurist Chorus, introduced the film, having been invited to show it in Pittsburgh by the president of the Ukrainian Technological Society, George Honchar.

The film presents the story of the brave 17 men who formed the Ukrainian Bandurist Chorus in the winter of 1941 in Kyiv under German occupation and who, united together, endured throughout World War II, and the German and Russian occupations of Ukraine, to preserve the music of the bandura, which is “pleasing to God and the people.”

The bandura, the national instrument of Ukraine, found its earliest inception during the Kozak state in Ukraine, when individual kobzars roamed the countryside playing and singing songs. The bandura is a multi-stringed musical instrument, whose strings are individually tuned, and uniquely shaped to permit playing with both hands at once, unlike a guitar, or lute, or tambura, which is played with only one hand. It is intimately tied to Ukrainian culture, so much so that its playing was banned in 1876 by the tsar of Muscovy.

In 1902 Hnat Khotkevych conceived of the idea of having multiple players in an ensemble and chorus. It was not until Ukrainian independence in 1918 that the first professional bandurist ensemble concert was established in Kyiv. Many bandurist ensembles were created at this time, and a golden era of bandura performance and concerts ensued. But many players were killed in the initial years of World War II.

In the winter of 1941, surviving members along with newly recruited musicians came together as an ensemble of 17 to form the Ukrainian Bandurist Chorus. Hryhory Kytasty was appointed as its artistic director. This was at the time of the German occupation, and concerts were permitted only with its approval.

Their desire to be free from both Nazi and Soviet persecution was pointedly overstated during one of the ensemble’s performances, which led to its eviction from Ukraine. Chorus members were forcibly transported to Germany in August of 1942. Their fate was unknown. Their desire for freedom had led them to become workers themselves. After several months of incarceration and hard labor, the chorus was ordered to perform in the work camps of the Ostarbeiters across Germany to raise their spirits, so that their labor production would increase. The chorus eventually returned to Ukraine, but were forced to flee to Germany in the face of the Russian advancing forces.

“Music of Survival” is available in both English- and Ukrainian-language versions of a single DVD disc that can be ordered online through musicofsurvival.com. It can also be streamed and downloaded online from the same website. It is said that there are tears at every concert of the Ukrainian Bandurist Chorus. The same can be said of every showing of “Music of Survival.” One must hear the last survivors of the early chorus, Petro Kytasty and Mykola Liskiwsky, sharing their stories to really grasp and understand their courage in preserving the bandura and Ukrainian culture.

The Pittsburgh showing was sponsored by the Ukrainian National Association, Ukrainian Selfreliance of Western Pennsylvania Federal Credit Union and the Ukrainian Technological Society of Pittsburgh. Mr. Sushko announced that showings are being planned throughout the American and Canadian Ukrainian communities.

Sponsorship of the film that helps bring this story to local communities is aiding in developing a platform of education and advocacy centered on delivering this rich musical and cultural legacy to future generations. The educational initiative under way includes gifting a copy of the film to every graduating student of schools of Ukrainian studies across North America, every graduating year, in perpetuity. The first DVDs were gifted to Ukrainian school graduates after a screening of the film for students of St Vladimir’s Orthodox Parish school in Parma, Ohio, on March 24.

Gratitude was expressed to Roman Komichak, host of the Ukrainian Radio Program in Pittsburgh, for announcements, to Greg Sembrat, president of the Carnegie Ukrainian Club, for hall use and food offerings, to Fred Yasnowsky for audio set-up and to Svitlana Honchar for delicious Ukrainian pastries.

The Ukrainian Bandurist Chorus has announced a 100th anniversary tour for 2018. (Details on concert dates, times and places will be forthcoming.) The Pittsburgh community was pleased to learn of the concert date of September 9 in Youngstown, Ohio, and especially to see Nick Hladio of nearby Ambridge, Pa., who is now a member of the ensemble.