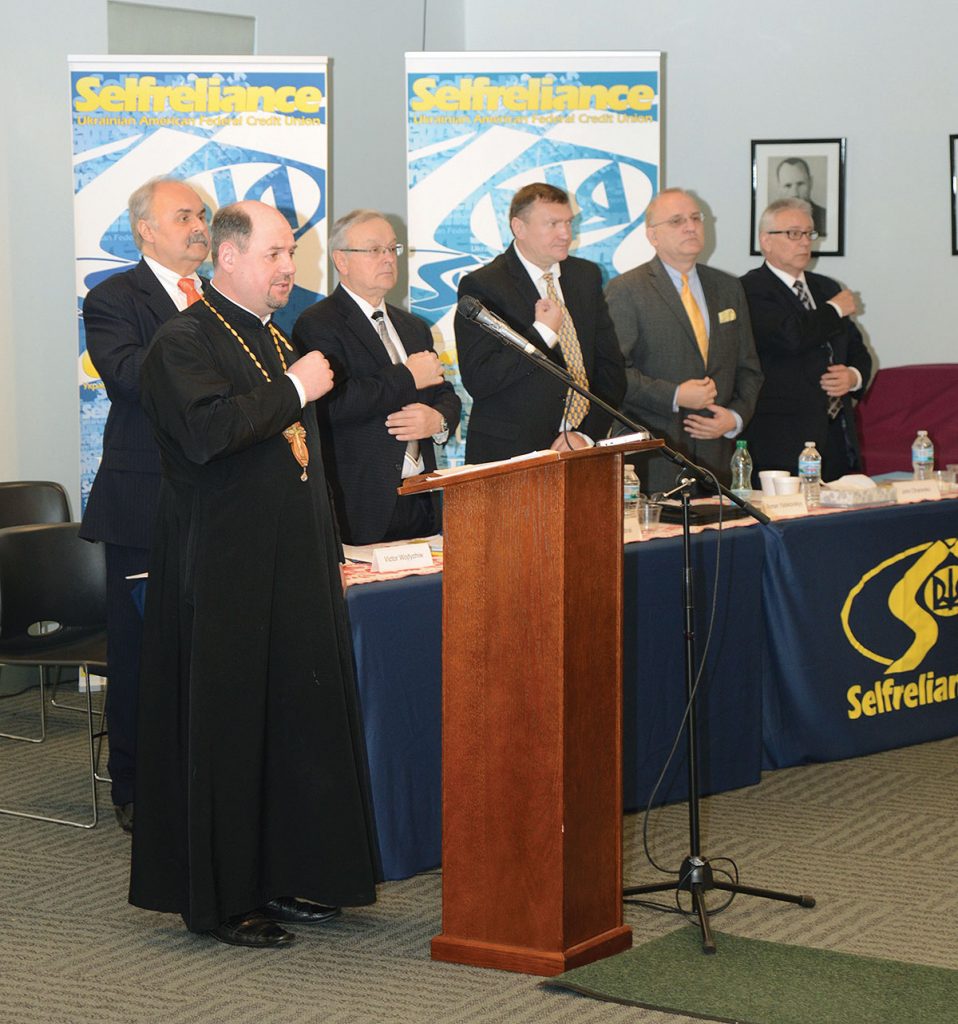 CHICAGO – The 67th annual meeting of the membership of Selfreliance Ukrainian American Federal Credit Union took place Sunday, March 18, at the credit union’s Home Office in Chicago. The meeting was simulcast in New Jersey, at the Ukrainian American Cultural Center of New Jersey in Whippany.

In New Jersey, the meeting was called to order by SUAFCU Board Vice-Chair Ihor Laszok. He introduced the Rev. Stepan Bilyk, pastor of St. John the Baptist Ukrainian Catholic Church in Whippany, for the blessing.

SUAFCU Board Chairman Michael Kos officially opened the meeting and asked the Rev. Ivan Lymar of St. Volodymyr Ukrainian Orthodox Cathedral in Chicago to bless the assembly. Dr. Kos then greeted all members present at both locations and introduced the board and committee members in Illinois, as well as in New Jersey. Board Secretary Victor Wojtychiw read the minutes of the 66th annual meeting. Reports of the credit union’s elected officials followed.

Mr. Kos reported as chairman of the Board of Selfreliance UAFCU. Dr. Kos quoted the Chinese proverb: “May you live in interesting times” and stated that 2017 certainly qualified as an “interesting time.” Two key influences on the economy this past year were the inauguration of a new president of the United States, and the increased nuclear tension with North Korea. He referred to the impact of tax reforms passed by Congress, the decrease in unemployment and the increased valuation of the stock market. He said the credit union also showed positive growth in 2017, enabling it to transfer $2.1 million to The Selfreliance Foundation in order to provide ongoing support to the Ukrainian community. Chairman Kos thanked the credit union’s CEO and his dedicated staff, as well as the members of the board and committees for their hard work and dedication.

President/CEO Bohdan Watral described the credit union’s 2017 achievements. Net income was a healthy $2.16 million, and capital as a percentage of assets is now over 20 percent, which places SUAFCU among the strongest and most stable financial institutions in the United States. Selfreliance continues to provide the highest caliber financial services in a professional, caring environment, he noted.

Irene Wruskyj, reporting for the Nominating Committee, presented a slate of three individuals to serve as directors: Mr. Kos, Oresta Fedyniak and Mr. Laszok. They were re-elected unanimously.

President/CEO Watral then presented the budget for 2018, which was approved as read. Following a comment from a credit union member in New Jersey, Chairman Kos ended the simulcast, saying farewell to members in New Jersey. VP Laszok concluded the New Jersey portion of the meeting.

Community greetings followed in Chicago. Pastors of various churches and organization representatives approached the microphone to thank the credit union for its support and comment on the benefits of the ongoing partnership between the credit union and the community.

Anna Cirilli, principal of St. Nicholas Cathedral School, thanked the credit union for its ongoing support and understanding of the school’s mission. Representatives of Plast Ukrainian Scouting Orgnization and the Ukrainian American Youth Association expressed their gratitude to the credit union for its moral and financial support. The greetings included a video clip of young Plast scouts reciting a poem dedicated to Selfreliance.

Christine Zhuk thanked Selfreliance for its support of the Hromovytsia Dance Ensemble, describing the incredible experience of dancing before audiences of Ukrainians in Spain.

Bishop Benedict Aleksiychuk asked the audience to imagine how much more difficult life in Chicago would be without Selfreliance, especially for new immigrants. The Ukrainian Catholic eparch of Chicago expressed his confidence in the continued support of the credit union for both its members and the community.

It is worth noting that in 2017 The Selfreliance Foundation granted $500,000 in loans to various Ukrainian community organizations. As Mr. Watral noted in his report, this sum was augmented by the marketing department and credit union’s support in implementing various initiatives.