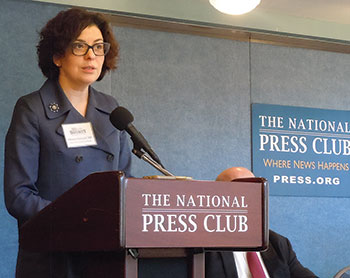 WASHINGTON – The National Press Club in Washington recently hosted the ninth U.S.-Ukraine Security Dialogue – the latest collaborative effort by the Center for U.S.-Ukrainian Relations (CUSUR), the American Foreign Policy Council (AFPC) and the Ukrainian Congress Committee of America (UCCA). Titled “Identifying Ukraine’s Security Priorities,” this full-day conference on Thursday, March 8, was presented free of cost for participants, as part of a continuing effort by the organizers to bring the best and latest information about Ukraine’s National Security Strategy into the mainstream conversation about international affairs in the United States.

Two dozen senior U.S. and Ukrainian strategists, as well as defense and security experts, held forth in a series of panel discussions and focus sessions dedicated to determining Ukraine’s security priorities in four critical areas of concern: maritime security, cybersecurity, national security strategy and information warfare. Foremost among the themes touched upon by the conference presenters was the current Russian-Ukrainian war that has been waged since 2014.

The conference coincided with several additional Ukrainian events in Washington, including a gathering at the Holodomor Memorial, a commemorative event at the Taras Shevchenko Monument in honor of the poet’s 204th birthday, as well as the first Ukrainian Day advocacy event of the year on March 7. Many participants of the latter event, organized the by the UCCA’s Ukrainian National Information Service (UNIS), remained in Washington to attend the security conference, which was also livestreamed by UCCA on Facebook, allowing for an even larger international audience to participate in the event.

The conference was made possible by the generous contributions of the Jurkiw Family Fund, as well as the Self Reliance New York Federal Credit Union, the Heritage Foundation of First Security Federal Savings Bank and the Toronto-based Buduchnist Credit Union.

Walter Zaryckyj of CUSUR welcomed the conference attendees shortly after 9 a.m. In his abbreviated summary of the previous U.S.-Ukraine Security Dialogues, Dr. Zaryckyj distinguished the state of Ukraine’s national security before and after 2014, with the first five dialogues focusing on macro assessments of Ukraine’s military, diplomatic and intelligence efforts as it moved closer and closer towards eventual inclusion into the greater Euro-Atlantic security structure. The last four dialogues have, by necessity, focused on the current Russian-Ukrainian war.

After this short opening, the microphone was passed to UCCA President Andriy Futey, who introduced Rep. Brendan Boyle (D-Pa.), representing the suburbs and parts of the city of Philadelphia. Mr. Futey highlighted Congressman Boyle’s “extremely close relationship” with the Ukrainian community in his district, his work on the House Foreign Affairs Committee, and the recent passage of the U.S.-Ukraine Cybersecurity Cooperation Act of 2017 that he introduced.

Rep. Boyle began his remarks by acknowledging the many community activists and friends in attendance, with whom he had met in his congressional office a day earlier. The congressman attributed the extensive work he has done – “probably more extensive than [with]any other single group in my district” – to the strength of the Ukrainian American community in his district. He went on to discuss the importance of his cybersecurity legislation, stressing that “the United States cannot view the crisis in Ukraine as some faraway conflict or someone else’s problem” and insisting that the United States “can, and must, do more,” including sending lethal defensive weapons to Ukraine.

Participants of the first focus session then took their place at the dais. Speaking on the theme of “Why Ukrainian Security Matters – the Ukrainian Perspective,” Ukraine’s Ambassador to the United States Valeriy Chaly was joined by two co-presenters and members of Ukraine’s Parliament Oksana Syroyid, (Samopomich) vice-chair of the Verkhovna Rada; and Artur Herasymov, (Petro Poroshenko Bloc Solidarnist), chairman of the Rada’s Committee on Military-Industrial Complex and Military-Technical Cooperation.

Ambassador Chaly led off the session by focusing on the need for Ukraine and the United States to develop a common response to threats such as Russian election interference based on the two countries’ shared experience with that specific threat. Relating back to Dr. Zaryckyj’s opening summation about the nature of the U.S.-Ukraine security relationship that existed 10 to 15 years ago, the ambassador highlighted the intense level of cooperation across all levels of government between Ukraine and the United States.

In her prepared remarks, Ms. Syroyid also underscored the changed position of the West since the beginning of the 21st century, and foremost the United States, which “understands today the threat from Russia.” She cautioned, however, that while the European Union has kept up its sanctions of Russia in support of Ukraine, it continues to develop initiatives such as the Nord Stream 2 pipeline. Completing such a project, in her estimation, “may end up for Europe as the Molotov-Ribbentrop Pact,” a reference to the infamous agreement between Nazi Germany and the Soviet Russia.

Mr. Herasymov focused on the most recent security interactions between the United States and Ukraine, “unprecedented actions” in his words, including the authorization of security assistance in the form of lethal defensive equipment that will save Ukrainian lives. He further praised the work of Ambassador Kurt Volker, the new U.S. special representative for Ukraine negotiations, as representing the best of the U.S. foreign policy tradition and the commitment to the principles of international law and order.

Due to the first of what would be four massive Nor’easter storms in the month of March, some travel difficulties resulted in a shifting schedule for the day’s panelists. James Sherr of Chatham House presided over the first panel discussion, introducing Andriy Levus, a member of Ukraine’s Parliament and the former vice-chairman of Security Service of Ukraine (SBU), Ambassador John Herbst of the Atlantic Council and Phillip Karber of the Potomac Foundation to present on the theme “Establishing Ukraine’s Strategic Security Priorities.”

Mr. Levus, assisted by the translating skills of both Borys Potapenko and Mykola Hryckowian, highlighted the imminent danger posed by Russia in the Ukrainian presidential and parliamentary elections in 2019.

Ambassador Herbst focused on the transformation, or “replacement,” of Ukraine’s national security structure in 2014 by passionate volunteers “who stopped the Kremlin advance and began a rollback.” This was followed by a discussion of the key reform requirements for the Ukrainian government and the dangers posed by populism towards achieving that end.

Mr. Karber prepared a PowerPoint presentation titled “Establishing Ukraine’s Strategic Priorities,” laying out in concrete numbers the number of attacks carried out on Ukrainian positions by Russia’s forces, the expansion in the number of combat-ready battalion groups in Ukraine, and a cartographic representation of Russia’s changed military posture versus Eastern Europe from before and after the 2014 invasion of Ukraine.

Prior to continuing with questions from the audience, the panel was interrupted by the arrival of Rep. Brian Fitzpatrick (R-Pa.), who represents the 8th Congressional District along Pennsylvania’s eastern border and serves as a co-chair of the Congressional Ukraine Caucus. Prior to serving in Congress, Rep. Fitzpatrick served his country as a supervisory special agent with the FBI assigned to combat corruption from an assignment desk in Kyiv. During his time in Ukraine, he was involved with the founding of the National Anti-Corruption Bureau (NABU), as from his perspective, corruption is a worldwide problem.

“For a country to have integrity… you have to have a corruption-free mission advance with the support of the government,” he said. The congressman was also the co-sponsor of the U.S.-Ukraine Cybersecurity Cooperation Act of 2017.

The next panel discussion, “Determining Ukraine’s Maritime Security Priorities,” was chaired by Ariel Cohen, a returning speaker from the Institute for Analysis of Global Security. Dr. Cohen stressed in his introduction that it is time for the United States to view the Black Sea not just as a Ukrainian issue, or a Black Sea issue, but as an issue of global strategy vis-à-vis Russia. He presented Admiral Igor Kabanenko (Ukrainian Naval Forces, retired), president of the Ukrainian Advanced Research Project Agency; Glen Howard, president of The Jamestown Foundation; and Stephen Blank of the American Foreign Policy Council.

Admiral Kabanenko’s detailed presentation included PowerPoint charts documenting the Soviet Union’s and Russia’s trajectory towards maintaining Black Sea dominance since the end of the second world war. This included the shifting of resources to militarize Crimea, and subsequently the development of gas exploration and transit through Crimean territory, further emphasizing the importance of Crimea as a strategic asset. The admiral’s presentation ended with his envisioned priorities for Ukrainian maritime security, from the near to the long term.

Mr. Howard seamlessly picked up on the priorities Ukraine should be focused on, having been involved with an official delegation of international security experts who visited Ukraine last summer, including members of the American Foreign Policy Council, the Jamestown Foundation, the Hudson Institute and The Heritage Foundation alongside Ukrainian American representatives of CUSUR and the UCCA. Having contributed to the follow-up report from that delegation, Mr. Howard detailed his vision of Russia’s likely approach to further take over Ukraine’s coastal territory. Therefore, a priority in Kyiv should be making sure that the two Island-class patrol boats prepared for Ukraine that currently sit in Baltimore harbor are brought to Ukraine as soon as can be expedited.

Dr. Blank finished off the panel by clarifying that Ukraine’s maritime priorities need to go beyond defense against Russian naval attacks on the sea or even amphibious landings. Russian warships also threaten land-based operations centers with their artillery, he noted. While NATO has begun to respond to Russian operations in the Black Sea with small patrols, Ukraine would certainly assist the Western alliance in maintaining the international security structure by increasing its land-based ability to fire on Black Sea warships, establishing a military airbase to go along with the NATO airbase in Romania, as well as developing a successful model of ship-to-ship maritime defense which it still lacks.

Part 2 of this detailed report will appear in a subsequent issue of The Ukrainian Weekly.